The COVID-19 pandemic is greatly impacting how Iowans view education. As a result, many students across Iowa are either learning completely online or in a hybrid model of online and in-class learning. Parents are being forced to balance work from home as well as facilitate their children’s online learning. Many children are not getting the education they deserve based on the difficulties of online learning. Whether it is stress and anxiety as a result of the pandemic or the adjustment of online learning, educators in Iowa are seeing a “COVID slide” in terms of academic performance.

Some parents are looking to new methods of educating their children. Education pods are starting to spring up across the nation as one innovative solution. Education pods or “learning hubs” are organized by parents with small groups of students (dozen or less) that are led by a teacher. Pods can be an effective solution, but often alternatives to public school education are out of reach for low and middle-income parents.

Iowa’s public-school funding formula needs to be modernized to place the interests of families first and education dollars should be funding children rather than school systems. The legislature has made some recent progress in allowing more flexibility to the overly complex school funding formula. However, it is time to reform school funding by allowing dollars to follow students.

A recent poll demonstrated that 62 percent of Iowans believe education dollars should follow the student to a school of their choice.  Families should have the ability to choose what school can provide the best opportunity for their children. Educational opportunities should not be restricted by zip codes, socio-economic status, or other roadblocks. Iowa currently has two tax credit programs that help families afford private school options, but these are limited in scope.

Too often the policy discussion over education centers around spending and for good reason. Public education consumes the majority of the state budget and is one of the driving costs of property tax. In 2020, school districts consumed $2,484,613 in property tax dollars, which is a 25 percent increase since 2013. The Iowa Department of Education provides $16,314 per student (preK-12), which is $326,280 for a class of 20 students. Iowa’s “total investment in preK-12 education is over $3.4 billion for FY 2021.” Governor Kim Reynolds has noted that “since 2017, Iowa has invested nearly $13 billion into preK-12 education.”

These four principles would not only bring greater clarity to Iowa’s complex system of education finance, but also create a student-centered funding model. The Iowa legislature has started to address some of these principles, such as flexibility in funding, but more work needs to be done.

Politicians and special interests can bicker over education spending, but what is often overlooked is the fact that education is about opportunity. Public education is a priority, but it does not always meet the needs of all students. Whether it is the curriculum, environment, culture, or the need for special educational services, public schools may not always be the best fit for all students. 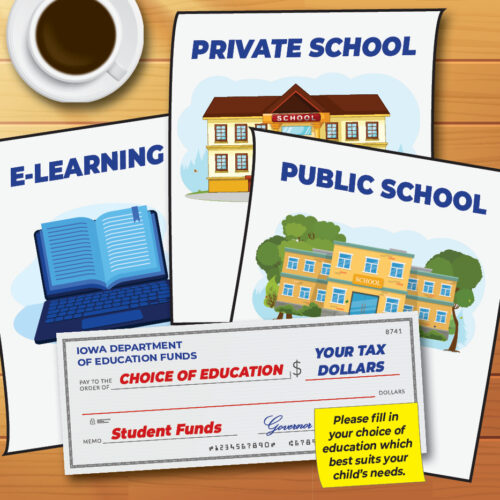 Every child should have the ability to attend the school which provides the most opportunity for them to succeed. Iowa should expand its school choice policy to include Education Savings Accounts (ESAs). An ESA would allow funding to follow the student rather than a specific school.

ESAs represent the gold standard for school choice policy. An ESA provides parents with the flexibility to customize the best education for their children. This includes not only choosing which school their child attends, but also purchasing other educational services, thus affecting the overall quality of education which they receive. The flexibility of an ESA is what makes it such a successful policy.

Some of the educational services ESAs can help cover include:

ESAs provide parents with a “deposit of public funds into government-authorized savings accounts with restricted, but multiple, uses.” The dollar amount of an ESA varies depending on how the program is established. The amount is based on the state’s cost per pupil. Arizona’s ESA program is funded at 90 percent of the state portion of school funding. As an example, recent ESA proposals in the Iowa legislature, if passed, would have provided on average between $4,042-$5,613 per student. For Fiscal Year 2021, the state cost per pupil in Iowa is $7,048.

Policymakers can design an ESA either to be utilized by parents with children who have special needs or learning disabilities, or families with lower incomes. However, the best ESA policy is universal, which means all children would benefit. ESA programs are also designed with an accountability mechanism to prevent misuse of funds.

Currently five states (Arizona, Florida, Mississippi, North Carolina, and Tennessee) have an ESA policy. Arizona’s ESA program is considered one of the best policies in the nation. Arizona’s Empowerment Scholarship Account is the most flexible in terms of what parents can use the money for. On average, families get $6,100 per child (non-special needs or non-kindergarten).

Opponents of ESAs often argue that they deprive public schools of both students and resources. This argument is not true, because ESAs “affect public schools’ funding and resources in the same way they’re affected when a student leaves because their family moved to a new district.” In addition, “public schools get to keep almost all of the federal and local tax dollars and usually a portion of the state funds allocated for each child. It is also assumed an ESA will create a mass exodus of students leaving public schools. Martin Lueken, Ph.D., Director of Fiscal Policy and Analysis at Ed Choice, argues that “participation rates for the majority of private school choice programs are below 10 percent.”

Having education dollars follow the student should not be controversial. Corey DeAngelis, Director of School Choice at the Reason Foundation, points out that other programs provide funding to families and education should be no exception. “This is exactly how we fund many other taxpayer-funded initiatives, including Pell Grants for higher education and prekindergarten programs. For these programs, funding goes to families who can then choose from a wide array of public or private providers of the service. The same goes for food stamps. In these scenarios, the power is rightly in the hands of families rather than institutions,” wrote DeAngelis.

Iowa has an opportunity to expand educational opportunity by allowing dollars to follow students. Expanding school choice in Iowa will not only lead to greater competition in education but will also allow parents the freedom to select the best possible education for their children. Allowing greater choice in education will empower families.