As the Pandemic Ends, Federal Strings Tangle Medicaid in Iowa

Given the Center for Disease Control’s (CDC’s) recent easing of its COVID-19 guidelines, the national public health emergency appears near its end. The technical end of this emergency declaration will signify that the pandemic is officially over. And while that development will be cause for celebration, it will also trigger a major event for state governments and citizens enrolled in Medicaid.

Medicaid, jointly run by the federal and state governments, provides healthcare coverage to Americans who can’t afford it on their own, typically because they are low-income, disabled, and/or elderly. A statutory formula determines how each state divides the cost of medical services with the federal government, and during the COVID pandemic, the federal government increased its own share.

Money coming from that source is never free, however. For states to receive the additional funds, they had to agree to attached strings, one of the most impactful of which was the requirement to provide continuous coverage for Medicaid enrollees until the end of the public health emergency, regardless of changes in their income. This enhanced benefit obviously costs money, and on average, Iowa is receiving around $68 million per quarter, or $272 million per year, extra because of the public health emergency.

Why does this matter to the average taxpayer? Because people who are no longer eligible for Medicaid are still enrolled; the federal government will not allow Iowa to remove them until the public health emergency ends. Having people take advantage of services for which they are not eligible is unnecessarily driving up Medicaid costs and diverting attention and resources away from those who need it most.

The main driver of Medicaid expenditures is enrollment, or simply the number of people who are covered in the program. For fiscal year 2023 (FY23), the total estimated cost for Medicaid in Iowa is $2.1 billion, of which $1.5 billion will be paid using Iowan tax dollars. The Iowa Legislature regularly adjusts Medicaid spending to ensure the program is fully funded, but the FY23 estimate assumed the emergency would end in June 2022, with those who were no longer eligible disenrolled in August. This did not happen, meaning the cost will continue to increase above forecast projections.

Before COVID, around 3,000 new individuals per month were enrolled. In FY21, the enrollment rate more than doubled, with total growth of 81,520 people for the fiscal year. Currently, almost one out of every four people in Iowa is enrolled in Medicaid, which continues to increase at an alarming rate, as the following chart shows. 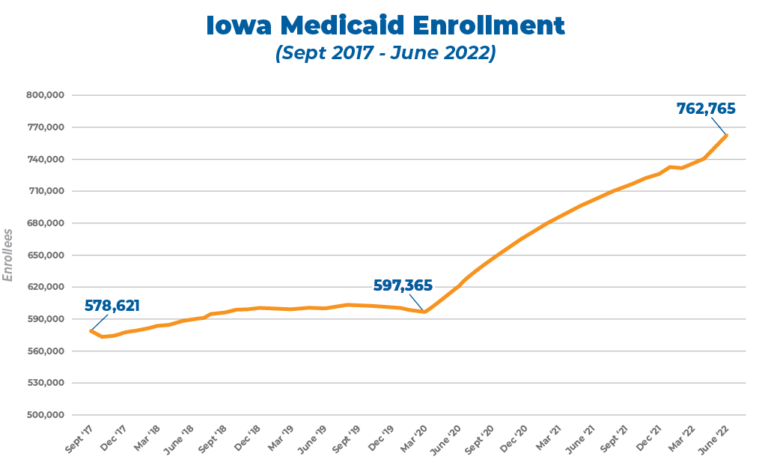 Iowa’s Department of Human Services (DHS) does not differentiate between enrollees who are only eligible under the COVID allowance, so no data is available on the added costs when the public health emergency is no longer in force.

Fortunately, Iowa’s DHS is already preparing to redetermine eligibility for nearly a quarter of the state’s population. However, nothing can officially begin until the emergency ends — unless the State of Iowa decides to refuse the additional funding provided by the federal government, that is. If Iowa made that choice, then the “strings” would disappear, and DHS could begin the process of redetermining eligibility. And that’s the difficult position states often find themselves in - accept federal funds and the associated restrictions, or give up federal dollars in exchange for more autonomy.

Iowa is incurring additional costs due to increased Medicaid enrollment, although they are not easily quantifiable. Moreover, many of the workers who lost their jobs at the beginning of the pandemic have regained employer-based health insurance. Medicaid is intended for those who need it, not workers with financial security.

Refusing the additional funding would send a message to the federal government that it is time to end the pandemic. Iowa would also be sending a message to other states that the Hawkeye State is fiscally responsible. In the face of a recession and inflation, the current enrollment policy is not sustainable, and efforts for greater oversight to ensure the integrity of Medicaid cannot be delayed.

By taking prudent steps now, Iowa could find even better footing than it had before the pandemic. Medicaid’s growth has long been a leading driver of Iowa’s General Fund spending, meaning reforms are required if the services are to be protected for those who are truly in need.