Politicians’ talk about tax relief doesn’t always mean the taxpayer wins in the end. Not all tax relief is created equally, as a comparison of Iowa with its neighbor to the west will show.

Iowa enacted historic tax reforms in March that significantly cut income taxes and reduced taxpayers’ liability. This change was possible because the state had been prudent with its dollars. Iowa did not increase spending, has fully funded reserves, and is experiencing a billion-dollar budget surplus. That is what a taxpayer victory looks like.

In Nebraska, the government has taken a different track that has not translated into a true reduction in taxes for many citizens. In 2020, Nebraska enacted a property-tax relief program. However, to receive the tax credit, the property owner must file an income tax return and claim it. After the first year of the program, around 40% of the funds allocated for the credit were left unclaimed. This year, the available funds have grown, but $200 million in refunds remain on the government’s books. In fact, Nebraska’s governor just held a press conference to encourage Nebraskans to claim their property tax credits! 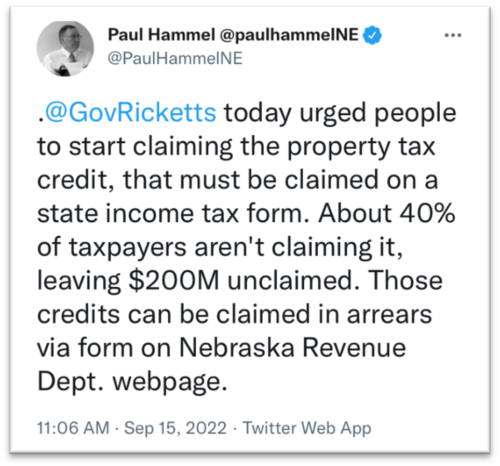 As Iowa officials contemplate how to best deliver property-tax relief in the coming years, three aspects of Nebraska’s reform come up short and should be avoided:

First, it’s taxpayer active. That means the taxpayer must actively go out and seek a credit. Relief should go to eligible taxpayers automatically, as Iowa’s income tax reform is doing.

Second, Nebraska’s credit has done nothing to cap the spending of local taxing entities or to otherwise prevent future property tax burdens from growing.

Third, the policy created a “tax shift,” as it is known in the economic and policy worlds. Nebraskans are paying more in income and sales taxes to shift the money toward a property tax reduction program. This doesn’t truly reduce taxes. Iowa had a similar (if less significant) experience when many counties failed to pass on mental health savings.

More than a generation ago, Nebraska and Iowa both enacted their income and sales taxes with a promise to reduce property taxes, and neither state fulfilled that promise. Tax shifts don’t work in the long run, and Nebraska’s property-tax policy is another proof.

More recently, Iowa’s state government has provided an example of good tax reform. Now, it’s time for local governments across the state to do the same. Local spending is at the heart of property taxes: If governments didn’t keep increasing their spending, then they would have no reason to keep increasing taxes.

Their inability to follow this simple logic is not justification for shifting the tax burden from one level of government to another. True relief for the taxpayer — a genuine win — will only be achieved when we address local government spending.