The Economic Impact of COVID-19 on the Iowa Economy: Summer Update [1]

This summer COVID-19 continues to be an albatross on the economy. Although Iowa’s economy is open, social distancing policies remain. Iowa's unemployment rate fell from 10 percent in May to 8 percent in June. Even with Iowa’s unemployment rate falling, fear of the virus is preventing people from resuming regular consumer activities. In addition, many small businesses are fighting to survive by keeping their business open at limited capacities due to social distancing. Every aspect of life in Iowa is being impacted by the uncertainty of the pandemic.

From an economic standpoint, the good news for Iowa is that as the COVID-19 emergency began, Iowa had $800 million in reserves and a projected budget surplus of nearly $400 million. With economic uncertainty likely to linger, Iowa’s budget is positioned much better than some of our neighbors to dampen the financial impact of this pandemic. In May, the Revenue Estimating Conference lowered revenue projections and in June, the legislature passed a “status quo” $7.78 billion Fiscal Year (FY) 2021 budget. This budget was only slightly higher than the $7.75 billion FY 2020 budget. The legislature's cautious approach to the budget was the best policy.

To help Iowans understand the potential economic impact of COVID-19, TEF Iowa has teamed up with economists Ernie Goss, Ph.D., MacAllister Chair in Regional Economics at Creighton University, and Scott Strain, M.S., who is a Senior Economist with Goss & Associates. Dr. Goss is a longtime trusted economist who understands the Midwest economy and his Rural Mainstreet Index is a must read for understanding our region's economic outlook.

In The Economic Impact of COVID-19 On The Iowa Economy: Summer Update, the authors examine the infection rate, unemployment, and tax revenues relating to the economic impact of the virus. It is important to note that the findings within this report are estimates based on the available information and the calculations performed by Goss & Associates. For example, it is too early to know what impact the various stimulus measures from the federal government will have on Iowa’s economy. At this time, Iowa has received $3.08 billion in federal stimulus and has only spent $2.4 billion.

TEF Iowa is pleased to partner with Goss & Associates to provide timely analysis as Iowa continues to navigate through this uncertain time.

*Estimates contained in this white paper will be updated as the number of Iowa COVID-19 deaths and positive tests are made public and monthly state employment data are released. Estimates do not consider any future impacts of federal support payments.

As of July 18, 2020, the Centers for Disease Control and Prevention (CDC) calculated that COVID-19 had generated 128,035 U.S. deaths and 783 Iowa casualties. Per 1,000,000 in population, this represented 387 deaths for the nation, and a much lower 247 for Iowa. Despite Iowa’s lower death rate, this study estimates that the impact of COVID-19 on the Iowa economy has been significant. For example, between June 2019 and June 2020, the percentage of Iowans receiving unemployment benefits expanded by 7.8%. This placed Iowa's economy 32nd among the 50 states and the District of Columbia. That is, 31 states experienced greater increases in insured unemployment rates over the year from COVID-19 than Iowa. Totaling direct and spillover impacts, this study concludes that COVID-19, through July 4, 2020, has generated a total loss of $5.1 billion for the Iowa economy with job losses of 211,174, and a reduction in state and local taxes of $352.1 million. Without an economic rebound, it is estimated that COVID-19 will shrink Iowa’s economy by 9.1% over the period of March 2020 to March 2021.

Due to COVID-19, the U.S. economy contracted by 4.8% in Q1, 2020. However, the latest U.S. Bureau of Labor Statistics (BLS) data indicate that the Iowa unemployment rate fell from 11.0% in April to 8.0% in June 2020. Even as the state’s unemployment rate sank by 3%, the state’s employment level declined by more than almost 160,000 jobs (not seasonally adjusted), and the current unemployment rate is approximately five percentage points above the pre-COVID-19 level.[3]

And in terms of economic impacts, the virus has altered both purchasing and selling patterns of businesses and consumers across the nation, including Iowa with impacts by industry ranging from slight to almost decimation. The objective of this white paper is to quantify the economic impacts on the State of Iowa, with the understanding that the estimates will change as the geographic intensity of the virus changes. Authors will update the estimated impacts presented in this study several times until the virus is controlled, or moves to remission.

The COVID-19 infection expansion has had a profound impact on the U.S. and Iowa labor markets and economies. Figure 1 profiles the number of Iowa individual first-time claims for unemployment benefits between March 7 and July 11, 2020.[4] 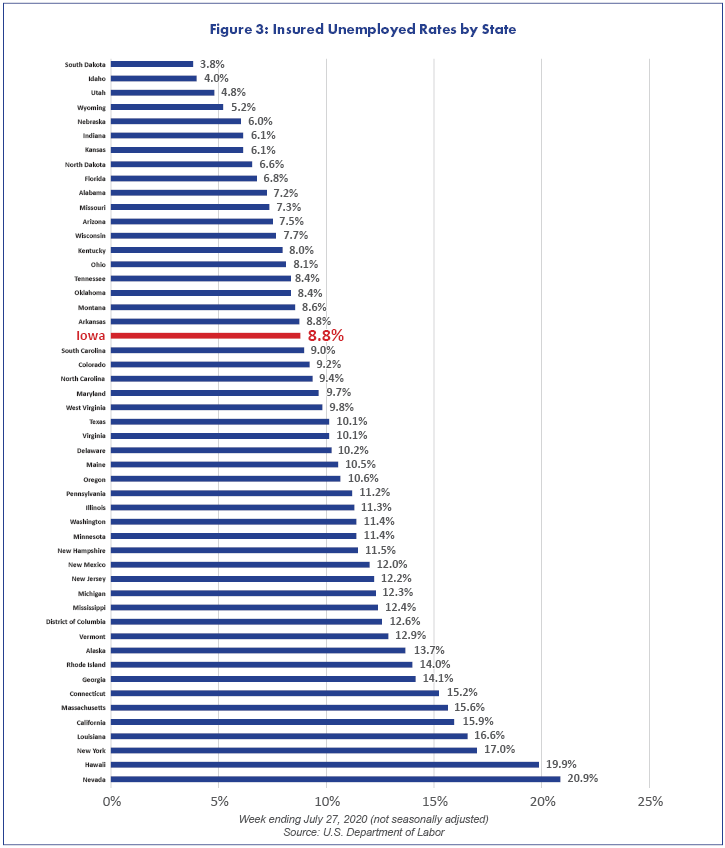 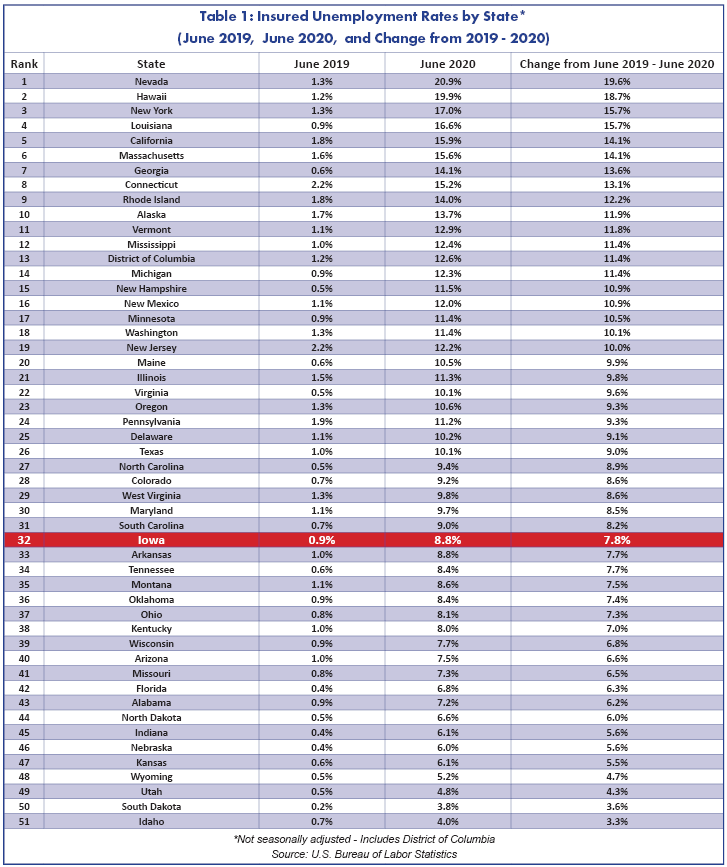 Step 1: Estimate total unemployed for the COVID-19 period by comparing the relationship between total and insured unemployment for 2019. That ratio is 1.07. Thus, it is estimated that total unemployment is equal to the number of insured unemployed multiplied by 1.07. Step 2: Apply this ratio to the July 4 number of insured unemployed to estimate the total number of Iowans unemployed. Step 3: Estimate the number of job losses based on the expected unemployed to the actual unemployed. Step 4: Estimated direct job losses from Step 3 are input to the IMPLAN Multiplier System, an economic modeling application. IMPLAN will produce spillover impacts, which when added to direct impacts, equal total economic impacts for the state. Importantly, impacts listed in the subsequent tables assume no significant impact from additional federal stimulus spending.

Table 2 lists the estimated economic loss for the State of Iowa, for the time period March 21, 2020 to July 4, 2020. As presented, losses for this time period were: wages & salaries of $1.7 billion, self-employment income of $250.2 million, and a total impact of $5.1 billion. As indicated, the state shed 211,174 jobs during the period due to COVID-19. The annualized average yearly wages and salaries of jobs lost was $30,631. This is well below the state average of $47,330. This is due to the fact that a high percentage of jobs lost were in the low wage industries of food services and personal care and service occupations (Source: U.S. Bureau of Labor Statistics).[8] 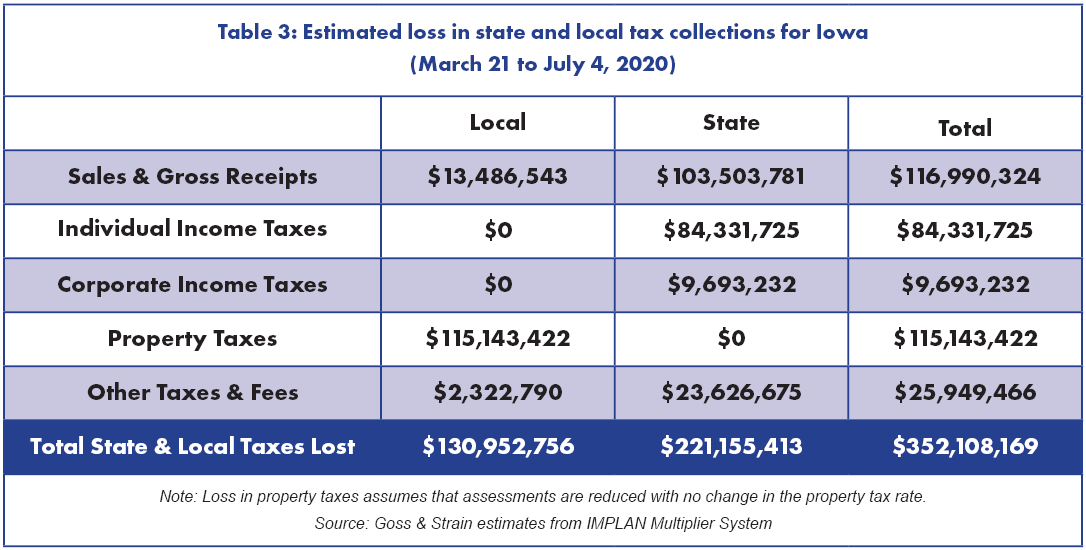 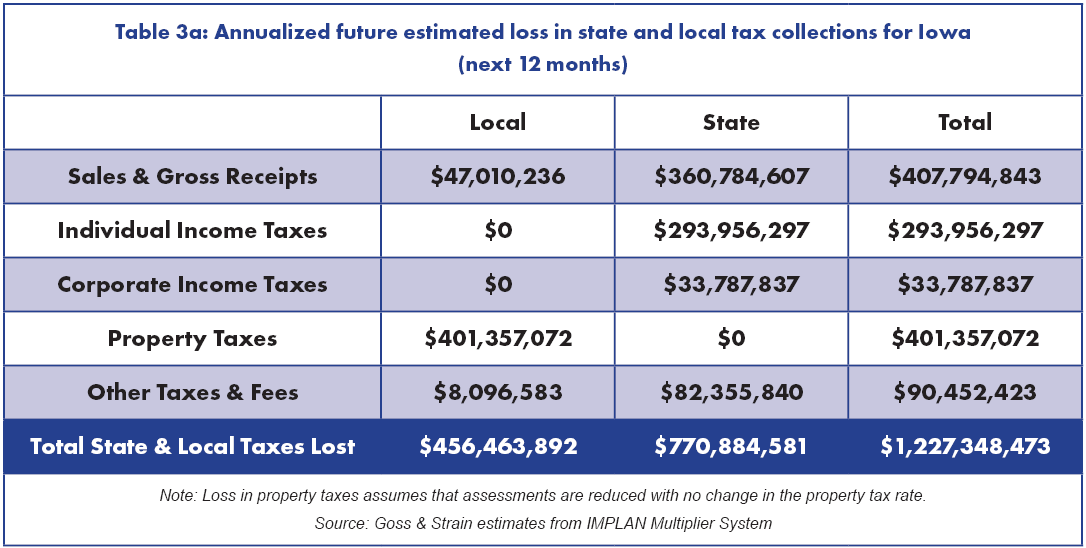 Not since 1776 when Adam Smith described the industrialized capitalist system in his Wealth of Nations have the global, U.S. or Iowa economies experienced the challenges presented by COVID-19. Estimates contained in this study indicate that, if the current level of unemployment is not reduced by the federal CARES plan, or other public and private policy actions, Iowa’s GDP for the 12 months of COVID-19 will be reduced by 9.1%.

Importantly, these estimated losses are based on the assumption that March losses are not offset by increased purchases in later months. However, it is clear that some losses, for example, reduction in haircuts in March will not be offset by a doubling of haircuts in a future month. The estimated losses contained in this white paper will be updated in a future study.

The analysis presented here does not consider how much output will be further lost, nor does it consider the impact of the federal rescue plan which includes payments to state and local government agencies, businesses, or direct payments to citizens to offset the negative impacts of COVID-19. Finally, some impacts such as the loss in state corporate and individual income taxes will not surface until April 15, 2021 when corporations and individuals file their income tax returns for 2020.

[1]  Estimates contained in this white paper will be updated as the number of Iowa COVID-19 deaths and positive tests are made public and monthly state employment data are released. Estimates do not consider any future impacts of federal support payments.

[5]  For approximately the third week in June, the U.S. BLS estimated an unemployment rate of 7.9% with the number of Iowans unemployed of 130,164. These estimates are based on a sample size of 2,160 Iowa households.

[6] For the third week of June, the number of insured unemployed in Iowa was 152,781, but the number of unemployed, insured plus uninsured, was 130,982. This discrepancy is significant and should be investigated. It is likely that the error in the sample by the BLS was significant since all individuals receiving unemployment compensation are genuinely unemployed.

[7] The BLS samples only 2,160 households in Iowa to produce their estimated number of unemployed. Thus, the margin of error is quite large. On the other hand, the number of insured unemployed is not derived from a sample, but from the full population. Thus, there is no sampling error. 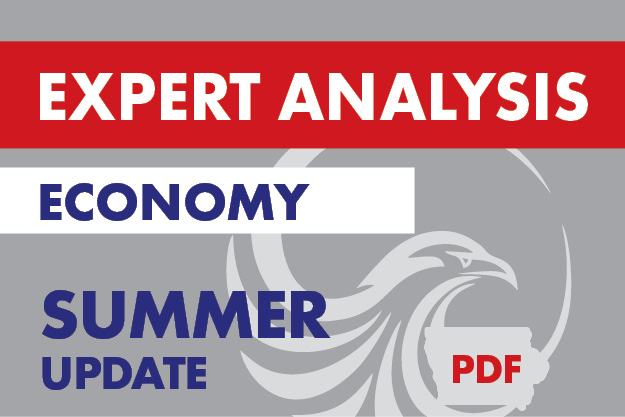 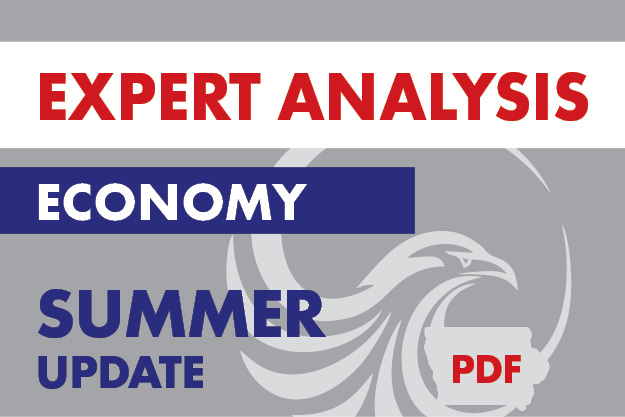 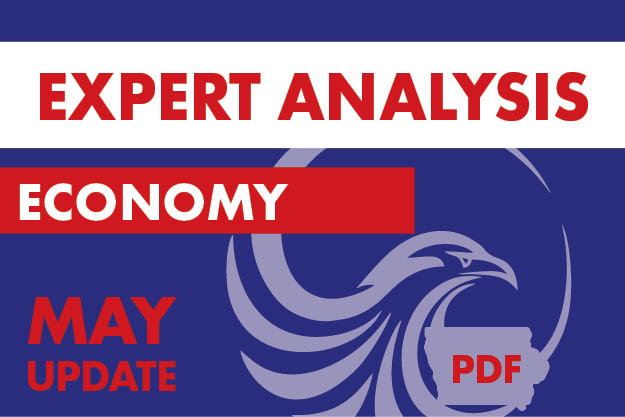 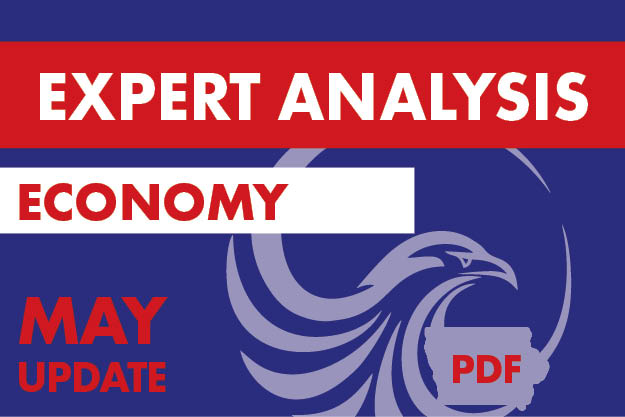 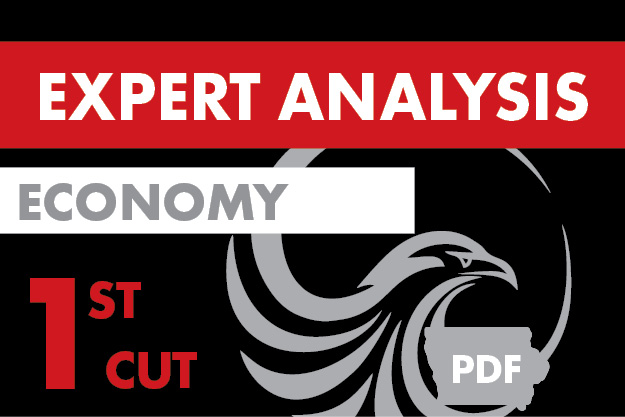 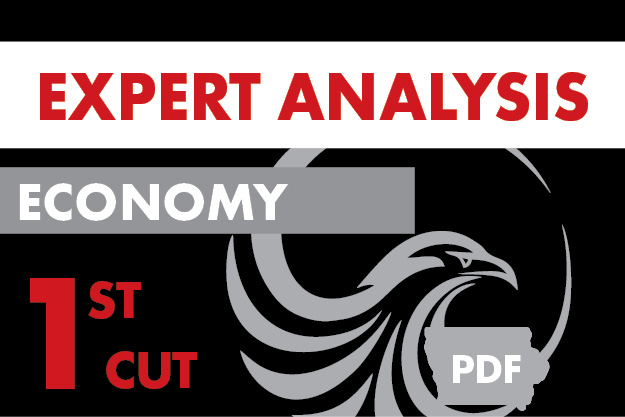