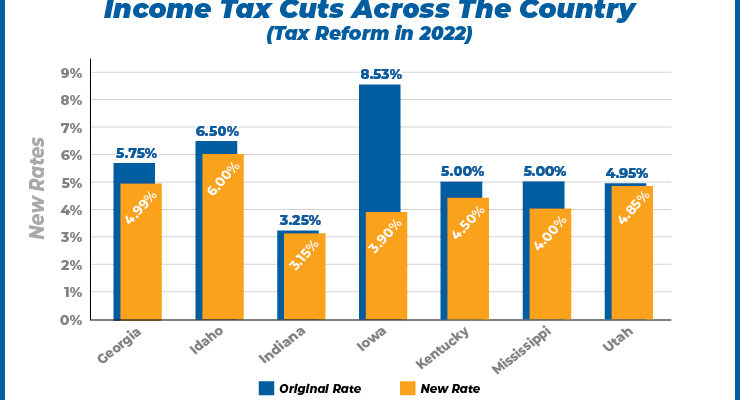 This year may be one of the most historic for states lowering income tax rates across the nation.  So far, at least six other states have joined Iowa in passing tax cuts, while many more have tax reform legislation under consideration. The graph above illustrates the new rates that will be delivered to individual taxpayers in their respective states.

The states that have cut their rates are forcing their neighbors to take notice. This is certainly the case for Iowa, which is moving to become a pro-growth leader in the Midwest.  “Iowa’s success might very well be the spark that ignites a new tax rebellion across America’s heartland, when lawmakers in surrounding states such as Wisconsin, Nebraska, Minnesota, and Missouri quickly realize they need to keep up with Iowa — or risk falling behind by standing still,” wrote Jonathan Williams, Chief Economist, and Lee Schalk, Vice President of Policy, both at the American Legislative Exchange Council (ALEC).

ITR Foundation looks forward to re-capping all the tax relief measures that are passed around the country this year once every state legislature has finished their work.  In the meantime, our friends at Tax Foundation are monitoring the progress nationwide.