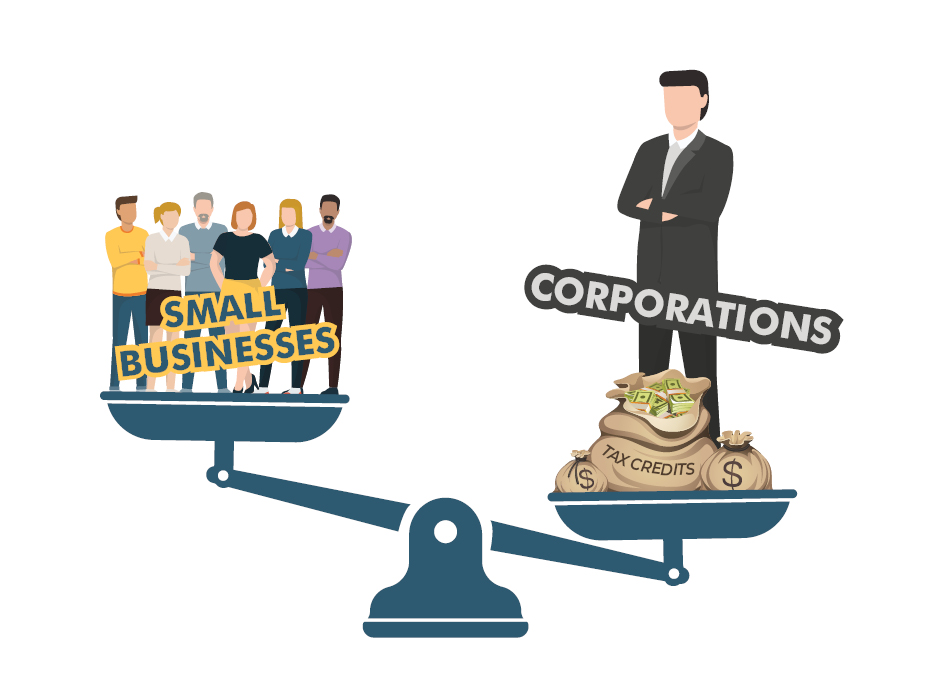 State and local politicians all over the country seem to love to dole out tax dollars to big businesses in an effort to get them to locate in their area. While they routinely argue that those subsidies will benefit the local economy, economic research does not support that conclusion.

State and local economic development incentives may seem to help the local economy, but the offsetting costs are usually ignored. As a result, the overall effect is unclear. Since they typically involve poaching businesses from other areas in the U.S., from the perspective of the nation as a whole, these policies are clearly a net loss.

Big businesses win and small businesses lose because the small companies do not have the political and financial capital to have a seat at the table when these subsidies are doled out. Companies that have been serving their local communities and faithfully paying their taxes get punished by having their own tax dollars used against them to lure big businesses from other areas. That puts them at a competitive disadvantage with their new competitors.

Small businesses are the backbone of the economy. According to Census Bureau data, more than 80% of business establishments have fewer than 500 employees; 70% have fewer than 20. These incentives programs make it harder for those entrepreneurs to succeed. That strategy doesn’t make sense.

A better strategy would be to get rid of all of those corporate welfare programs and reduce taxes across the board for all businesses, not just big businesses with political influence. According to the Tax Foundation’s State Business Tax Climate Index, Iowa ranks only 42nd, behind all of its neighboring states except Minnesota. Iowa’s high corporate and personal income taxes are a big reason for that unfriendly business climate.

Iowa has the highest corporate income tax rate in the country: 12%. Only New Jersey comes close with 11.5%. Every other state is below 10%. Twenty are at 6% or below; six of those do not tax corporate income at all. Many small businesses pay under the personal income tax. However, Iowa’s personal income tax is also very high. Only six states have top rates higher than Iowa’s 8.53%. Among its neighboring states, only Minnesota’s rate is higher.

Those high income-tax burdens put Iowa at a competitive disadvantage. Lowering them would help alleviate that problem. And eliminating targeted economic development incentives programs could provide the off-setting spending reductions needed to make that possible. A recent study by the Mercatus Center found that 12 states could reduce their corporate income tax by more than 20% if incentive programs were eliminated. That includes a 36% cut in Iowa. Only six states would see a larger reduction. In those six, the corporate income tax could either be completely eliminated or reduced by more than 90%. These are big savings that would provide substantial tax relief to all businesses, both big and small, not just those with political influence.

The erroneous belief that economic incentive programs are actually beneficial to the economy is a large obstacle to eliminating them. Another recent Mercatus study examined the academic literature on this topic and found that these subsidies have “have little to no effect on where companies choose to invest.” If they are not impacting location decisions, then the benefits to the economy are actually much lower than often believed. Furthermore, the cost of the higher taxes needed to fund the subsidies is usually ignored. Correcting for those two errors makes it difficult to conclude that the net effect is positive.

Another barrier to eliminating targeted economic incentive programs is the belief that doing so will make that area lose businesses if other areas do not also eliminate theirs. That is not necessarily true. One study found that 85% of the recipients of subsidies from a local property tax abatement program in Texas were going to invest in Texas anyway, regardless of the incentives packages offered.

Furthermore, more research from the Mercatus Center discusses how several states are already discussing a solution to that problem: the use of an interstate compact, essentially a federal peace treaty between states, to end the arms race of targeted development programs. And, they also found that 49 states (including Iowa) already have “anti-subsidy” clauses in their Constitutions, which technically make these programs unconstitutional.

Spending on state and local economic development incentives is a pure loss of wealth to society; the national economy as a whole is harmed. Moreover, there is substantial evidence that the local area does not benefit either. Using scarce tax dollars to help big business at the expense of small business is a poor strategy. Lowering tax rates for all, not just those with political influence, is a better approach. That would provide a more level playing field in which all businesses can thrive.

Written by Dean Stansel. Dean is an economist and Senior Research Fellow at the O’Neil Center for Global Markets and Freedom in Southern Methodist University’s Cox School of Business in Dallas.