Following a path of fiscal conservatism is never easy. Numerous interests are calling for either new or an expansion of existing taxpayer funding for programs. Policymakers are confronted with difficult decisions in crafting a budget and providing for the priorities of government, but at the same time trying to be good stewards of taxpayer dollars. The pressure for policymakers to spend is often far greater than the desire to limit spending. Nevertheless, if policymakers want to seriously reduce tax rates and make their tax code more competitive, spending must be prioritized and limited.

Fiscal conservatism is defined by limiting spending, reducing tax rates, and eliminating burdensome regulations. Montana is just one example of the many states working to make their state more competitive through prudent spending and lowering tax rates.

Montana Governor Greg Gianforte recently signed a budget that keeps spending below the level of population and inflation. “The $12.6 billion state budget for fiscal years 2022 and 2023 reins in state spending to the lowest amount we have seen in our years of legislative service,” wrote Montana Representatives Wylie Galt, Casey Knudsen, and Sue Vinton.

The Montana legislature approved legislation that lowers the top individual income tax rate to 6.75 percent in 2022 and then to 6.5 percent in 2024. Other tax reform legislation simplified the income tax brackets by reducing the number from seven to two. Further, reforms eliminated two dozen tax credits and deductions and provided “$10 million in annual broad-based property tax relief.” To reduce the regulatory burden in Montana, Governor Gianforte issued an executive order creating a “Red Tape Relief Task Force” to review and eliminate excessive regulations.

One of the many lessons learned from the COVID-19 pandemic is states need to be prepared for economic emergencies. The pandemic was a “black swan” event that demonstrated the need for states to follow prudent budgeting and tax policies. North Carolina serves as the gold standard example of fiscal conservatism.

Since 2011, North Carolina’s legislature has pursued an economic policy agenda of reducing tax rates, regulations, and controlling spending growth. In the process, North Carolina “began changing the way the state budgeted its dollars, funded its roads, delivered education, and administered public assistance.” This has not been an easy process. However, legislators managed to overcome a $3 billion budget shortfall for the 2011-2012 fiscal year without renewing a temporary one-cent sales tax which generated $1 billion in revenue.

Perhaps most important, the legislature kept the growth of government spending to the combined rates of inflation and population growth, which means spending per person adjusted for inflation did not increase. Tax and spending are two sides of the same coin and controlling spending is crucial for any successful tax rate reduction. Tax rate reduction does lead to economic growth and additional revenue over time, but state tax cuts will often not “pay for themselves.” Restraining spending, utilizing conservative revenue forecasts, and other sound budgeting principles were vital to the success of North Carolina’s tax reform.

“Since 2011, North Carolina legislators have kept government growth in check even as they increased spending on teacher pay and Medicaid. They have cut taxes and built-up healthy reserves to get through natural disasters and economic recessions. People and jobs have come to North Carolina in response leading to faster economic growth,” wrote Joseph Coletti, a Senior Fellow who specializes in fiscal policy at the John Locke Foundation.

Currently, North Carolina is considering further tax reform. A bill is before the legislature that would reduce the individual income tax from 5.25 percent to 4.99 percent. In addition, the legislature is also considering a Colorado-style Taxpayer Bill of Rights (TABOR) amendment to the state Constitution, which would safeguard fiscal conservatism.

“North Carolina’s spending restraint over the past decade has yielded many significant benefits,” noted Coletti. Further, Coletti argues that a “constitutional Taxpayer Bill of Rights would preserve North Carolina’s positive momentum of the past decade. Legislators have been budgeting on the same principles since 2011, so adding it to the Constitution would merely hold future legislatures to the same standard.”

In recent years, Governor Kim Reynolds and the Republican-led legislature have followed a policy of fiscal conservatism. As a result of prudent budgeting, Iowa’s fiscal house was strong as the COVID-19 pandemic hit. Currently, Iowa has a budget surplus, and the reserves are full. Governor Reynolds and Republicans in the legislature have also reduced Iowa’s high individual and corporate tax rates.

So, what can Iowa learn from Montana and North Carolina? Iowa cannot afford to be complacent with tax reform. Policymakers should continue to reduce both the individual and corporate income tax rates. Iowa is in economic competition with other states and policymakers must understand that we will lose both people and jobs if our tax climate is not competitive.

Iowa must also continue to practice prudent spending. Government spending in Iowa is still above the rate of population and inflation. From 2013 to 2020, Iowa’s budget has grown 1.6 times faster than population growth plus inflation. This means that the cost of government is increasing at a faster rate than the average taxpayer’s ability to pay for government. This does not include the high property tax burden placed on taxpayers by local governments or the $9 billion in federal funds that Iowa received in FY 2019. 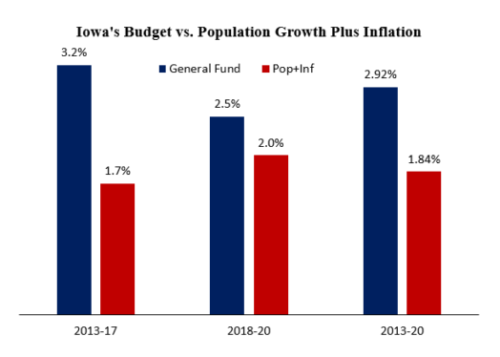 If the budget had matched population growth plus inflation over that period, it would have saved taxpayers $341 million or a family of four, on average, $430 per year. 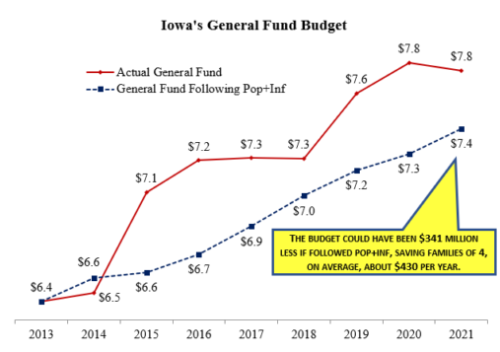 Iowa should continue to work and advance fiscal conservative policies. At this current time, the nation is seeing a drastic difference in state-level policymaking. The “Red” conservative states that are limiting spending and reducing tax rates are doing much better economically than the progressive “Blue” states that continue the failed policies of out-of-control spending and high taxes. Policymakers need to remember government spending is not the solution for economic growth, nor can government solve every policy problem

Fiscal conservatism not only places the taxpayer first, but also ensures that the priorities of government are funded.