Andrew Mellon, who was considered the best Secretary of the Treasury since Alexander Hamilton, served in the presidential administrations of Warren G. Harding, Calvin Coolidge, and Herbert Hoover. Prior to his service as Secretary of the Treasury, Mellon was a successful financier and businessman. Mellon understood sound fiscal policy and he helped to advance policies that lowered tax rates, reduced spending, and paid down the national debt. It was these policies that created tremendous economic growth, which became known as “Coolidge Prosperity.”  Mellon’s fiscal conservatism is desperately needed today as our nation is confronted with not only an escalating $28 trillion national debt, but the reckless tax and spend agenda.

President Joe Biden and Democrats in Congress have either passed or proposed $6 trillion in new spending since assuming office. The “Build-Back-Better” and Green New Deal, along with massive stimulus measures, and expanding the welfare state agenda is creating an even larger out-of-control federal leviathan. To pay for this radical expansion of government, President Biden is proposing a series of tax increases, which if enacted will cripple the economy.

It is doubtful that President Biden will turn from this progressive economic agenda and even embrace the tax cutting legacy of President John F. Kennedy and it is even more unlikely that the Administration would follow the principles of former presidential candidates Governor Al Smith and John W. Davis, who both stood against their own Democrat Party by trying to restore sanity by challenging President Franklin D. Roosevelt’s New Deal. Both Smith and Davis were part of the American Liberty League, which fought against the New Deal’s centralization of government and its reckless taxing and spending agenda.

Today’s economic problems can be solved by following Mellon’s principles on the economy and taxation. Mellon outlined his ideas in Taxation: The People’s Business, a small, yet powerful book that contains economic truths for the nation today. When Mellon assumed office with Harding, the nation was faced with a severe economic depression with high unemployment. President Harding responded to the depression by reducing tax rates, cutting spending, and paying down the national debt. The depression of 1920-1921 became short lived.

Regarding taxation, Mellon argued three essential elements to a sound tax policy: “It must produce sufficient revenue for the Government; it must lessen, so far as possible, the burden of taxation on those least able to bear it; and it must also remove those influences which might retard the continued steady development of business and industry on which, in the last analysis, so much of our prosperity depends.”

Mellon understood that a large tax burden would cause unnecessary harm to the economic livelihoods of both individuals and businesses. As Mellon wrote: “Any man of energy and initiative in this country can get what he wants out of life, but when that initiative is crippled by legislation or by a tax system which denies him the right to receive a reasonable share of his earnings, then he will no longer exert himself and the country will be deprived of the energy on which its continued greatness depends.”

Mellon not only understood that the power to tax is the power to destroy; he also understood that high rates of taxation did not translate into more revenue for the government. “It seems difficult for some to understand that high rates of taxation do not necessarily mean large revenue to the Government, and that more revenue may often be obtained by lower rates,” stated Mellon. Mellon argued that a “decrease of taxes causes an inspiration to trade and commerce,” which can lead to more revenues for the government.

Using the tax code for class warfare was also rejected by Mellon. “I have never viewed taxation as a means of rewarding one class of taxpayers or punishing another,” wrote Mellon. Further, Mellon, argued that the danger in a class warfare tax policy would mean the end of “the traditions of freedom, justice and equality of opportunity…” “The man who seeks to perpetuate prejudice and class hatred is doing America ill service,” noted Mellon.

Under Secretary Mellon’s leadership, the high tax rate of 77 percent under President Woodrow Wilson’s administration fell to eventually a low 25 percent by the close of the decade. Mellon did not just encourage low tax rates, but he also advocated a fiscal policy of reducing spending and paying down the national debt. Mellon also was a budget hawk, and his philosophy was shared by Harding and Coolidge.

Economic historian and Calvin Coolidge’s biographer, Amity Shlaes, notes that the United States economy averaged 4 percent growth during the 1920s. This is not to suggest that there were no economic problems during the 1920s, but the economic growth resulted in low unemployment, an expansion in entrepreneurship, which benefited American workers, including the middle-class. 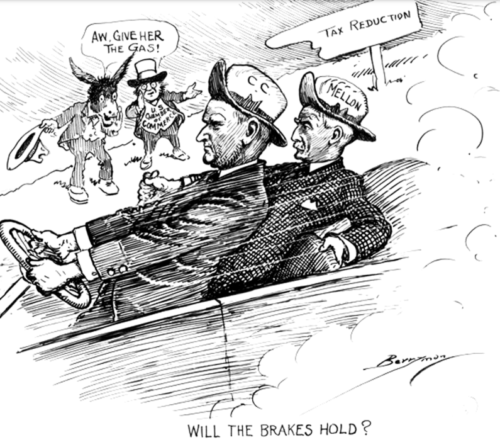 The fiscal conservatism of the 1920s can serve as a guide for policymakers today. President Donald Trump’s America First agenda reflected some of the principles of the 1920s, which also included the policies of slowing immigration and using tariffs to protect the economy and workers. President Trump’s tax and regulatory reductions created a period of economic growth.

Learning from Secretary Mellon and the 1920s can help us restore fiscal sanity and continue to create economic growth and opportunity for all Americans.