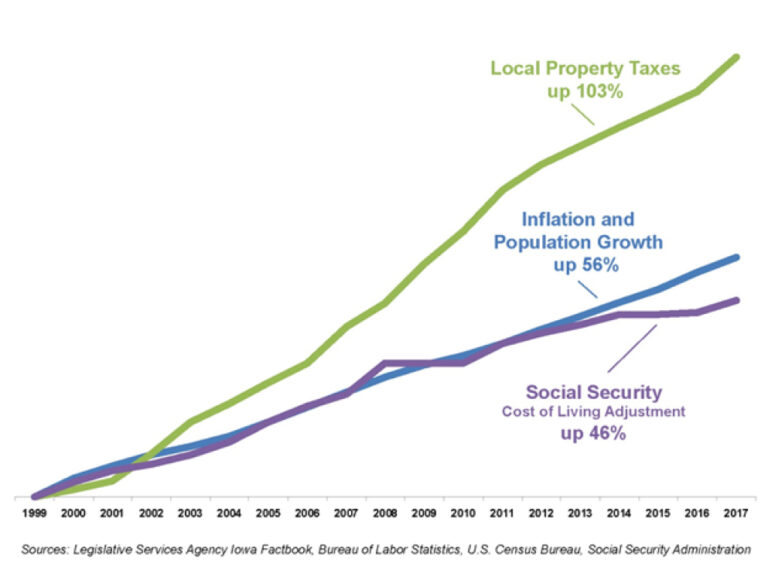 Between 2000 and 2017, Iowa property taxes increased by more than 100 percent. This increase is more than inflation and population (56 percent), Social Security cost of living adjustments (46 percent), and the growth of the state general fund (60 percent). The American Legislative Exchange Council’s Rich States, Poor States: ALEC-Laffer State Economic Competitiveness Index exposes Iowa’s property tax burden as the 16th highest in the nation.[i] The Tax Foundation’s 2020 State Business Tax Climate not only ranks Iowa one of the worst tax climates overall (42 out of 50), but Iowa is rated 35 out 50 in terms of property tax.[ii] In addition, Kiplinger’s state tax comparison also ranks Iowa as one of the top 10 worst tax states and a reason for this is high property taxes.[iii]  Concern about the reality of these escalating property tax bills supersedes the urban-rural divide and impacts all Iowans. Support for property tax relief receives bipartisan support across Iowa.

At the heart of high property taxes is local government spending.[iv]  County assessors are often blamed because people receive their property tax valuation bills in the mail and they immediately think that a valuation increase translates into a property tax increase. This is misplaced blame because it is the local government taxing authority that decides on how much taxes are needed to fund government. Assessors, for the most part, are doing their job and following the rules. It is local governments that are taking advantage of increased assessments to justify collecting and spending more taxpayer dollars.

The best method to provide long-term property tax relief is to stop overspending at the local level through a property tax cap or spending limitation and establish a strong truth-in-taxation measure. Iowa has a complex property tax system. Many local governments have shrewdly avoided taking votes on property tax rate increases, instead relying on increased property assessments to drive property tax revenue higher. The Taxpayers Association of Central Iowa, a non-partisan public policy organization, states that “because property taxes are basically a function of a rate times the assessed value (as modified by state law), assessed value increases will drive property tax increases unless decisions are made to drop the rate.”[v]  This spring assessments in several Polk County cities “rose from seven to 20 percent, depending on the type of property,” and the question must be asked whether property tax rates will be reduced “or will local governments default to a constant rate, meaning a huge increase for taxpayers?”[vi] These assessment-driven tax increases enrich local government coffers but lack the transparency that hardworking taxpayers deserve.

The objective of property tax reform should not be to single out certain classes of property, but rather it should ensure all Iowans receive tax relief. In addition, property tax relief should not favor one class of taxpayer over another. For example, it is often argued that senior citizens on fixed incomes should have targeted property tax relief, but the danger in applying this targeted relief is that it shifts the tax burden to other taxpayers. The fixed income argument also becomes relative, because the senior citizen may be on a fixed income, but so is the family with both parents working and trying to provide for their family.

Recent examples of states pushing for a property tax spending limitation include Governor Gregg Abbott (R-TX), who has proposed a property tax reform measure that calls for a property tax revenue growth cap of 2.5 percent per year.[ix] The legislature in Texas eventually passed the Texas Property Tax Reform and Transparency Act in the spring of 2019.[x] The law “requires cities, counties and other taxing units to receive voter approval before levying 3.5 percent more property tax revenue than the previous year.”[xi] The law also calls for greater transparency by creating “an online database to show property owners how proposed rate changes would affect bills,” and the database would also “include information about when public hearings are held to set local tax rates.”[xii]

Colorado has the strictest spending limitation. Colorado’s Taxpayer’s Bill of Rights or TABOR not only limits government spending but requires voter approval of tax increases and bond measures. The main pillars of TABOR include:

Colorado’s TABOR law serves as a taxpayer protection and empowers taxpayers with the ability to accept or reject new spending and taxes.

Truth-in-Taxation requires an extensive public notification and hearing process which notifies citizens of the intent to raise taxes and explains why additional revenue may be needed. If a local government decides they want to increase spending, the truth-in-taxation process requires a justification of the increase – and perhaps more important, it requires local elected officials to take votes to authorize new rates or assessments. The purpose of truth in taxation is to provide “notification, disclosure, and the elimination of automatic property tax increases.”[xvii] In describing the importance of truth in taxation, the Utah Taxpayers Association argues that “local governments should not receive an automatic 12 percent revenue increase simply because property valuations increased 12 percent.”[xviii]

Combining a property tax cap or spending limitation, along with a strong truth-in-taxation process, would provide relief for hardworking taxpayers across Iowa and empower citizens by making local governments more accountable. If a local government wants to spend beyond a reasonable limit, they should have to justify that spending before taxpayers and go on record with votes that increase property taxes.

Both Colorado, New York, and Utah provide examples of policies that control or slow government spending, which will lead to property tax relief. Spending limits combined with the truth-in-taxation process would provide property tax relief and reverse the massive increase in property taxes in many localities across Iowa.

During the 2019 legislative session, the Iowa legislature passed a property tax transparency and accountability measure. [xix] Iowa’s law only applies a soft 2 percent spending cap to cities and counties, while school districted are not included. The major provisions of the law include:

The goal of Iowa’s property tax transparency and accountability law is to slow the growth of property taxes and empower taxpayers to have a greater voice within the county and city budget process. This law will also make it more difficult for cities and counties to collect the windfall from increased assessments.  Although this law is a much-needed reform, the property tax transparency and accountability measure could be strengthened by including a direct notification provision.

A concern that has been raised from both Iowa’s and Nebraska’s transparency and accountability measures is that it does not have enough “teeth” in terms of enforcement and that local governments will easily continue to spend. Utah’s Truth-in-Taxation requires direct notification.  Direct notification will make local elected officials think twice about increasing property tax rates because they know all citizens will be notified of the increase and its potential impact on their property.

Local governments across Iowa are beginning the process of creating their budgets. Whether it is the county, city, or school boards, these local governments depend heavily on property taxes for funding. These budgets are being created in the aftermath of many Iowans who received notices from their respective assessor announcing increased property assessments. As these local government budget hearings progress it is imperative for taxpayers participate by asking questions about spending, property tax rates, and whether higher assessments will result in a windfall of more revenue and higher property tax bills. 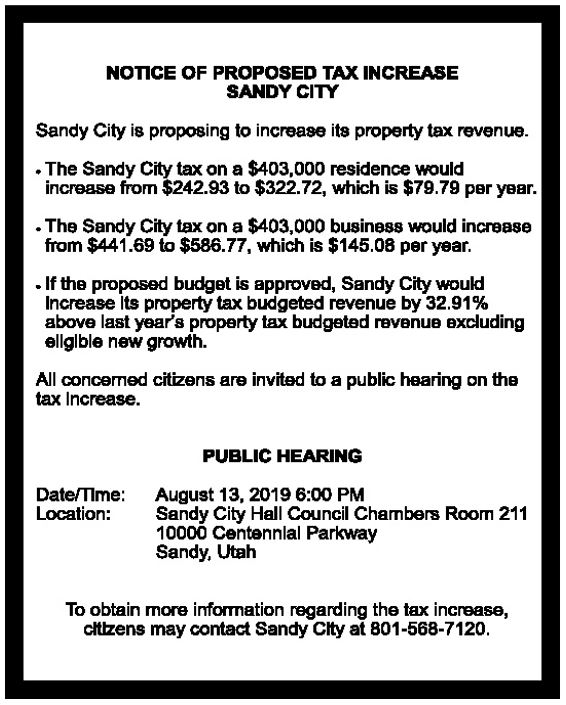 The new property tax accountability and transparency law provides more opportunity for Iowans to be involved in their county and city budget process. Nevertheless, requiring a direct notification of a property tax increase will make it easier for the taxpayer to see why they need to act.