The United States is growing more dependent on foreign nations for necessities, including potentially hostile nations such as China. As we examined last month, 2021 was the 10th straight year America’s trade deficit with the Chinese eclipsed $300 billion.  If that pattern is not alarming enough, though, there’s more worrisome activity being undertaken by China: the massive acquisition of American farmland.  By the United States Department of Agriculture’s own estimate, investments from China held $2 billion of American agricultural land at the beginning of 2020.

Chart 1 (below) details the ten largest sources of foreign investment in U.S. farmland.  While Chinese ownership is substantial, it is by no means the largest source of foreign ownership.  The real concern is the pace at which Chinese agricultural investment abroad is growing, having multiplied more than ten times in less than a decade. 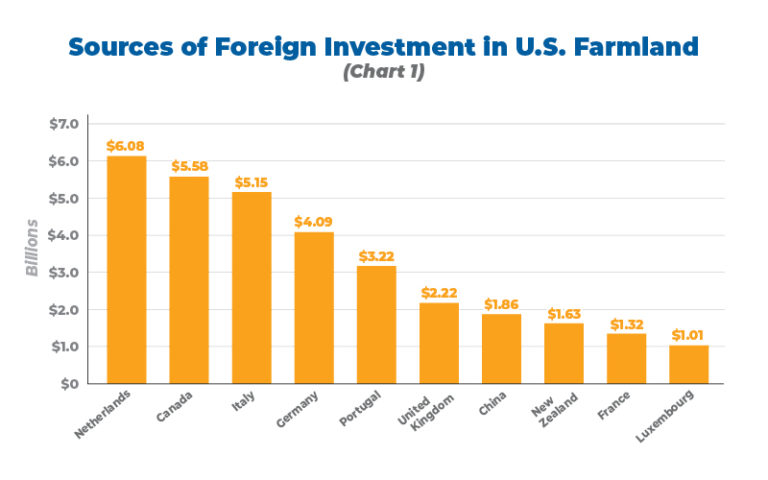 Representative Dan Newhouse (R-WA) has been paying close attention to China’s American land grab and succinctly stated his concerns when he proposed legislation to address the issue in 2021, “In recent years, the Chinese government has been buying up U.S. agricultural assets. Allowing this practice to continue would lead to the creation of a Chinese-owned agricultural monopoly and pose an immediate threat to U.S. national security and food security.  The U.S. cannot become dependent on China for our domestic agriculture and food supply."

Rep. Newhouse isn’t alone in Congress in seeing the need to reconsider American agriculture and manufacturing policies.  Recently, Iowa’s own Representative Ashley Hinson, a Republican from Iowa’s First District, and Senator Marco Rubio (R-FL) weighed in on the matter.  “A pro-American industrial policy will identify key industries — from food and energy to biotech, rare-earth minerals, and artificial intelligence — and pursue strategies to spur investment in them,” wrote Rep. Hinson and Sen. Rubio. Further, they argue that “revitalizing these sectors in the U.S. will prove essential to weathering future storms and making sure the 21st Century is another American Century.”

For decades, trade agreements have broken down barriers and allowed the production and consumption of goods to flow freely around the globe.  The outcomes from some of these agreements may be unintended and less than desirable.  Even politicians who usually stand in firm opposition to one another, like Senator Elizabeth Warren (D-MA) and former Vice President Mike Pence, seem to agree that limiting foreign farm ownership is prudent.

America’s citizens and our elected officials are right to be wary when nations such as China are acquiring greater amounts of farmland.  Iowa in particular understands that agriculture production must not be jeopardized at the expense of foreign interests, as it is one of six states that ban foreign ownership of farmland (see Chart 2 below).

While there are ways that state-level land ownership restrictions can be evaded, Iowa’s laws do a good job of ensuring Iowa farmland stays in the hands of domestic producers.  What’s more possible for our state is that the other components of food production, like processing plants, could be acquired and controlled by foreign nations.

One of the lessons learned since 2020 is that a disruption of the global supply chain for any reason has long lasting and broadly felt impacts.  It does not matter if that disruption is caused by a pandemic, a strained workforce, or outright acts of war; when the flow of goods stops, everyone is affected.  The world has come to understand that food production is just as much an issue of national security as high-tech defense systems. From that standpoint it is no surprise that China is actively acquiring the capacity to produce food for their enormous population.  The risk for us is when China’s actions come at the expense of American agriculture and Iowa’s economy.

Iowa is a land of plenty for producing basic necessities (don’t forget our energy industry, by the way).  It is in America’s national interest to preserve our ability to feed the country and we should be vigilant in protecting that contribution.  If we cede that responsibility to a foreign nation, we could be forced into outsourcing food production that is occurring within our own borders.