Earlier this year, Governor Kim Reynolds and the Iowa Legislature passed the largest tax relief measure in the state’s history. The historic tax reform will replace the progressive income tax with a flat 3.90 percent rate by 2026. Iowa’s corporate tax rate will also gradually phase down until it reaches a flat 5.50 percent. Starting next year, the reform will repeal all state taxes on retirement income.

What is next for tax reform supporters in Iowa? The top priority must be protecting this legislative success from spending increases, but the Hawkeye State can’t stop there if policymakers wish to continue our economy’s momentum.

Since assuming office, Governor Reynolds has made tax reform a priority. In 2018, the legislature passed what was then Iowa’s largest tax relief measure ever. This reform reduced both the individual and corporate income taxes while expanding the sales tax base to include online purchases. Next, a 2021 tax reform measure eliminated unnecessary income tax triggers that had been built into the 2018 reform, initiated a phaseout of the state’s obsolete inheritance tax, and eliminated the property tax mental health levy.

Although historic, those earlier reforms left in place Iowa’s progressive income tax, spanning nine different brackets and with a top marginal rate of 8.53 percent. The latest reform introduced a gradual phasing down and flattening of the rates for individuals, starting in 2023:

Iowa’s corporate tax, which currently stands at 9.80 percent, will follow a different phase-down approach. By design, the corporate tax phase-down is dependent on actual revenue and may, therefore, take longer to reach the end goal.

With its suite of tax changes, Iowa is leading the way in state-based tax reform. Patrick Gleason, Vice President for State Affairs at Americans for Tax Reform, has written, “When looking for the state that made the most significant changes to its tax code this year, that award probably goes to Iowa, the other state where lawmakers enacted tax reform in 2022 that moves in the same direction as North Carolina’s reforms.”

North Carolina is the gold standard for tax reformers, having successfully reduced both its individual and corporate income tax rates while keeping government spending in check. Other states making progress cutting tax rates include Arizona, Georgia, and Mississippi, which have all joined Iowa in the move toward low, flat tax rates. 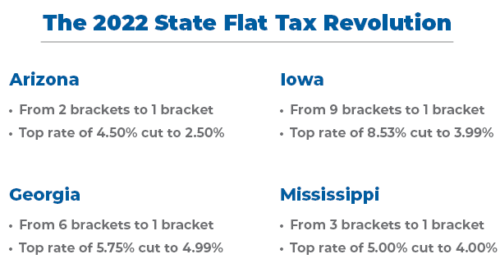 As the comparison above shows, Iowa’s reform is flattening more brackets and eliminating a higher top rate than its sister states. Nonetheless, in the economic competition between states for businesses and people, Iowa cannot afford to be complacent. Missouri, for example, is considering legislation that would eliminate its corporate income tax in 2023, creating incentive for Iowa to speed up corporate rate reductions. North Carolina has already passed legislation that will completely phase-out the corporate income tax.

On the individual income tax side, policymakers are unlikely to enact additional reforms until the flat rate is achieved in 2026. The state’s Taxpayer Relief Fund, which has the sole purpose of reducing income tax rates, enjoys a $2 billion balance, according to Legislative Services Agency (LSA) estimates. This money could be used to accelerate income tax rate reductions, but it also provides a reserve cushion against risk, such as a recession.

According to the plan, the income tax reform is “paid for” by the built-in growth of revenue, but high inflation is generating warning signs of a national economic recession. Although Iowa’s economy is in strong shape, the national economy is largely out of its control, and the Taxpayer Relief Fund can protect the tax rate reductions from a need to backfill recession-driven revenue shortfalls.

With this insurance against an economic downturn, perhaps the greatest challenge confronting policymakers is to avoid increasing spending. Governor Reynolds and the legislature have followed a path of prudent budgeting, but the “siren song” of special interests can be tempting. Iowa Senate Majority Leader Jack Whitver, who has prioritized fiscal conservatism, warns that keeping spending under control will be imperative in light of the tax cut: “This generational tax cut will be implemented over the next several years, and a conservative, sustainable budget must accompany that tax relief.”

Beyond statements of principle, policymakers should consider official implementation of stronger spending limits or additional fiscal rules to control spending. Iowa code currently limits the legislature to spending 99 percent of projected revenue. To impose greater discipline, that limitation should be lowered and strengthened, perhaps through reinforcement as a constitutional amendment. Other states’ spending limits vary in strength, with Colorado’s Taxpayer’s Bill of Rights (TABOR) recognized as one of the strongest. Iowa policymakers should study its details.

Another model can be found in Texas, where in 2021 the legislature codified a spending limit that prevents general fund appropriations from growing more than population and inflation. Michael Lucci, a Senior Fellow at the Cicero Institute, draws the connection between such limitations and tax reform, writing, “This change effectively puts tax relief on Texas’ permanent agenda. Policymakers can lock in tax relief by tying Texas’ future fiscal surpluses to automatic tax cuts.”

The foundation for pro-growth tax reforms is built with conservative budgeting and spending restraint. Iowa led with the tax cuts and now should pursue spending reform. Limiting spending is not just good policy for tax rate reductions, it also establishes a more stable fiscal foundation. Iowa’s continuing revenue growth demonstrates that fiscally conservative policies are not hurting state coffers. As this trend continues, further lowering or completely eliminating the individual and corporate income taxes will become a strong possibility.

Governor Reynolds and the legislature have made considerable progress providing tax relief and creating a pro-growth tax climate for Iowa, but the work is not finished. Not only must the latest reforms be protected, and spending controlled, but other taxes and credits require scrutiny, as well. Perhaps the biggest challenge for policymakers will be to address high property taxes.

If the momentum of success continues, Iowa’s journey down the path of pro-growth tax reform will not only allow taxpayers to keep more of their income, but also create a more competitive and prosperous economic climate for future generations.

Growing Iowa’s population and meeting the demand for more workers is one of the most significant economic issues confronting Iowa. A more competitive and tax-friendly climate will help attract new businesses and people. This year is historic for tax reform, but the work is far from complete.