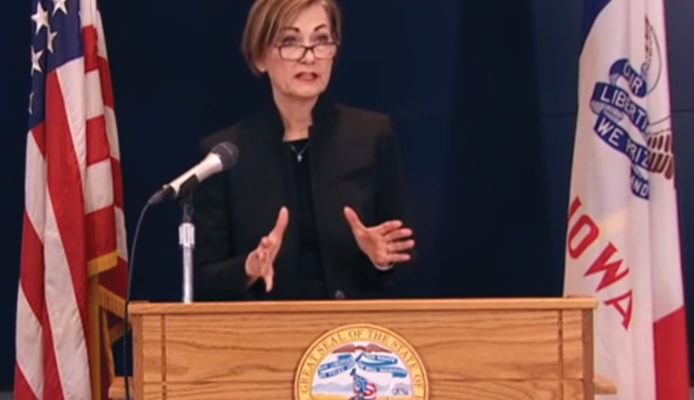 “School choice shouldn’t be limited to those who have the financial means or are lucky to live in a district that’s confident enough to allow open enrollment. So, let us make choice an option for everyone.” - Governor Kim Reynolds

Recently, Governor Reynolds became the first Governor in the nation to sign the Education Freedom Pledge. The American Federation for Children sponsors the pledge. The pledge states:

I pledge to support policies that promote parental rights in education and educational freedom. This includes the right of parents to voice their opinions at school board meetings and to take their children’s taxpayer-funded education dollars to the education providers of their choosing – whether it be a public, private, charter, or home school.

Governor Reynolds is sending a clear message that she will continue to fight and to stand with parents so that they can have the best educational opportunity for their children. The election of Glenn Youngkin as Governor in Virginia demonstrates that parents are tired of being sidelined by school boards, administrators, and the woke ideology that is infecting and radicalizing school curriculums.

By signing this pledge Governor Reynolds is not only standing with Iowa parents and children, but it sends a clear message to policymakers that she wants to build upon the education reforms that were enacted by the legislature this year.

In the 2021 legislative session, Governor Kim Reynolds made education a priority. In responding to the Governor’s call, the legislature passed a law that stated all Iowa students, starting in February 2021, would have the opportunity to attend school 100 percent in person. Regarding parental choice, Governor Reynolds, in her Condition of the State Address, proposed the Students First Act.

This bold comprehensive education reform plan placed Iowa students first by removing barriers to educational opportunity. The goal was to ensure that socioeconomic status and zip codes did not limit the ability of parents to provide the best education for their children. The centerpiece of the Students First Act was a “Student First Scholarship program, which was an Education Savings Account (ESA) for “students who are trapped in a failing school.”

“School choice shouldn’t be limited to those who have the financial means or are lucky to live in a district that’s confident enough to allow open enrollment. So, let us make choice an option for everyone,” stated Governor Reynolds. Often school choice is viewed as a student switching from a public to a private or homeschool alternative. Open enrollment serves as a vital element of parental choice in education.

As 2021’s legislative session wound to a close, thanks to the tireless efforts of Governor Kim Reynolds and the Republican-led legislature, lawmakers passed several essential measures that not only expand school choice in Iowa but also place the interests of students first. Some of the key measures include:

“Governor Reynolds understands that education dollars are not for propping up a monopolized system but rather are for educating students. I hope that expanding school choice with a universal ESA is at the top of the list in this next session’s agenda,” stated Walt Rogers, Deputy Director of Iowans for Tax Relief Foundation.

Iowans can be encouraged that Governor Reynolds will be working to not only improve public education in Iowa but also to increase opportunity and defend the interests of parents.