Governor’s Tax Plan By The Numbers

A state’s tax code is a tricky thing. No two states have identical laws governing their tax systems, so a direct, apples-to-apples comparison between states is impossible.  There are lots of details and the details really matter.  For instance, what is the standard deduction allowed by a state?  This varies across the country, and becomes a key aspect of the tax plan released by Governor Kim Reynolds last week.  But a good starting point for a review of all 50 state tax codes is the top marginal tax rate.  Stated simply, the top marginal tax rate is the highest rate any given state levies on the income of its citizens and businesses.

Below, we outline details of Governor Reynolds’s tax relief proposal, including the reduction of individual and corporate income tax rates, the move to a single bracket, and tax-free retirement income.

Considering those rate cuts from both a historical and competitive perspective, a clearer picture of Iowa’s evolving tax code emerges.  Prior to the first comprehensive income tax reform bill passing in 2018, Iowa’s top marginal rate was 8.98 percent, which placed our state 46th in the country (1st being the lowest rate, 50th being the highest); only four states had higher income tax rates than Iowa.  During 2022, Iowa’s top rate of 8.53 percent has moved us up to 43rd.  However, if Iowa’s planned rate of 6.50 percent were in effect right now, we’d be 33rd.  And if the governor’s proposed 4.00 percent was our top rate in 2022, Iowa would move all the way up to 12th, as eight states don’t levy an individual income tax of any kind, and only three that do have a top rate lower than 4.00 percent. 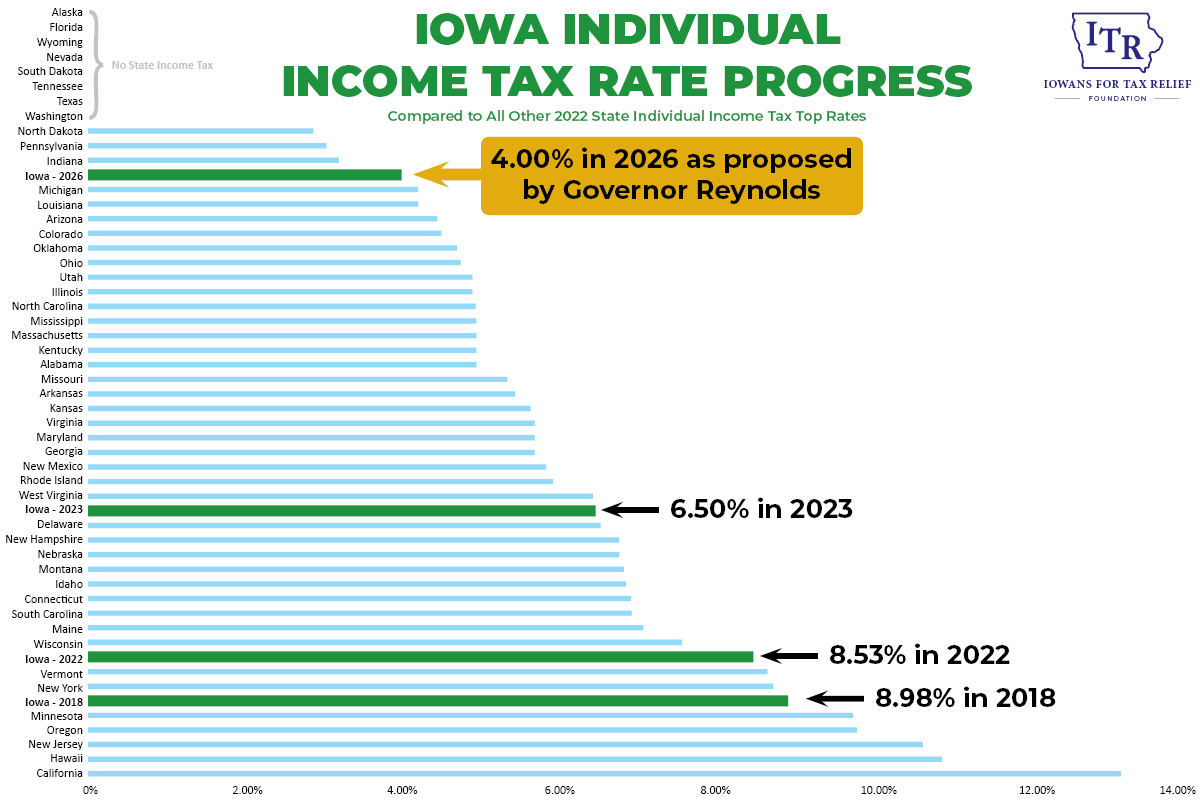 Another significant change that is occurring in Iowa’s tax code next year has to do with the standard deduction. 2022 is the last year of Iowa utilizing a standard deduction, which is $5,450 for married taxpayers filing jointly.  As part of the 2018 tax reform bill that was cemented into place last year, Iowa couples will essentially trade the $5,450 state deduction for the federal standard deduction of $25,900 in 2023, reducing the taxable income for families by over $20,000.  Single filers will see a similar change, moving from a standard deduction in Iowa of $2,210 to the federal deduction of $12,950.  Regardless of what changes the governor and legislature eventually agree on this year, Iowa taxpayers should see a major reduction in their tax bills in 2023

On the corporate income tax front, Governor Reynolds has proposed reducing Iowa’s top corporate tax rate of 9.8 percent, by a series of cuts that would eventually take the top rate down to 5.5 percent. Once the target rate is met, Iowa would have just a single corporate rate.

Corporate tax rates may be as nuanced as individual tax rates, making a perfect state-by-state assessment of corporate tax codes just as impossible as assessing individual tax codes.  Nonetheless, the top marginal rate remains the best single piece of data to use when considering how one state compares to another.

Prior to 2018’s tax reform bill, Iowa’s top marginal corporate rate was 12.0 percent, placing Iowa 50th in the country (1st being the lowest rate, 50th being the highest); Iowa literally had the highest corporate income tax rate in America.  Today’s rate of 9.80 percent has moved our state up to a tie for 47th.  And if the governor’s targeted 5.50 percent was our top rate in 2022, Iowa would move all the way up to a tie for 18th, as six states don’t levy a corporate income tax of any kind, and only eleven that do have one lower than 5.50 percent. 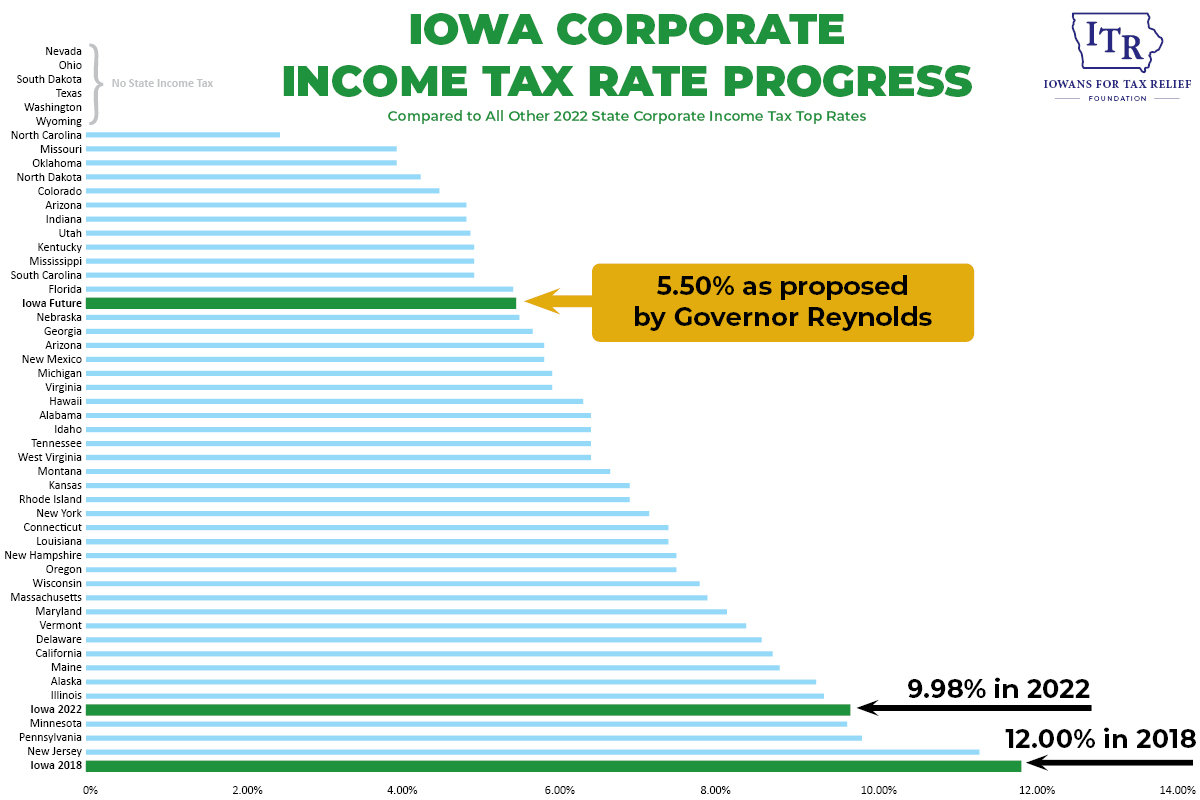 Iowa currently utilizes a progressive tax system, that taxes nine different ranges of income at progressively higher rates.  The first $1,675 earned is taxed at a rate of 0.33 percent, the next $1,676 is taxed at a rate of 0.67 percent, and so on, until the top rate of 8.53% is reached on income over $75,420.  Beginning in 2023, Iowa will only utilize four brackets.  And if Governor Reynolds’s proposal is passed, Iowa will phase out brackets as we phase in lower rates, until arriving at a single bracket, or flat rate, of 4.0 percent in 2026.

Across the country this year, there are eight states with no individual income tax, and therefore no brackets.  Ten states employ a single bracket, and 32 states have a progressive tax system, ranging from two brackets (Mississippi) to twelve brackets (Hawaii).  Just as some states have planned rate reductions in process, there are states moving to a flatter tax system with fewer brackets, too.

There are many caveats that apply when evaluating individual and corporate income taxes and The Tax Foundation is one of the best sources of information available.  The following links were a great resource to Iowans for Tax Relief Foundation when compiling this analysis: