Many people have been probably told by either a parent, grandparent, or even a teacher that “honesty is the best policy.” This rule should also apply to local governments. Taxpayers across the country are demanding answers on why local policymakers cannot deliver property tax relief. In response, a growing number of states are enacting strong Truth-in-Taxation laws that force local governments to be more transparent, accountable, and honest with taxpayers.

Iowans, whether they live in a city, suburb, or rural community are demanding property tax relief, too. Since 2001 property taxes have grown 122 percent, which is more than inflation and population growth.  That growth also exceeds the cost of living adjustment for Social Security.

When Iowans ask about property taxes, a blame game often results. The default response for many local government officials is to shift the blame for high property taxes onto the assessors. When questioned, those officials may argue that they are not to blame because they have not increased property tax rates. In fact, just last week we were told by a county supervisor, “What we really need is to get the assessor’s office in line. That’s where the tax increases are happening.”

Apparently, local officials forget that if assessments increase by 10 percent and they leave their rates the same, property tax bills will go up by that same 10 percent.  Unfortunately, in those scenarios of increasing assessments, property taxpayers probably do not have 10 percent more in their bank account to pay for that larger bill.

However, the assessor should not be blamed. This does not mean that assessors do not make mistakes, which is why there is an appeal process, but the reason for higher property tax bills is always government spending. Local governments always have the option to cut their levy rates to offset increasing assessments.  Even then, a minor reduction in levy rates may not do much to slow down the rapidly growing burden of property tax bills.

Making the smallest of rate cuts so that a local government can claim they are lowering property tax rates is only paying lip service to being respectful of the taxpayer.  Small reductions in the levy rate, or simply holding it steady, can act as camouflage to disguise the fact that they are collecting significantly more property tax dollars and adding lots of additional spending to their budgets. Taxpayers are often left confused because they are told that rates are going down, but their property tax bills have increased.

There are even cases of local officials belittling their voters who have the audacity to ask them to keep property tax bills in check. One taxpayer recently told us a story about asking her local officials to lower property tax bills.  The response she received from her city councilman was that she should get a second job! Elected officials can forget that the revenue they collect comes from hard working taxpayers and it is not their money.

The good news is, there is a solution to property tax frustrations.  Truth-in-Taxation laws can help eliminate the blame game and the sleight of hand tricks some officials try to pull off with levy rates. These laws are considered the gold standard of property tax protections and they are the most taxpayer friendly property tax reform laws in the country. More specifically, Utah and Kansas provide the best examples of effective Truth-in-Taxation laws.

While Utah’s protections have existed for decades, Kansas passed their law just last year with bi-partisan support. Taxpayers in Kansas, just as with those in Iowa, were growing frustrated with the entire property tax process. "For years, people had complained loudly about being told by local officials that they were holding the line on property tax, only to get larger and larger tax bills,” stated Dave Trabert, CEO of the Kansas Policy Institute.

One fundamental aspect of Truth-in-Taxation is direct notification. Under both the Utah and Kansas laws, local governments must send notices to taxpayers, providing information on the proposed tax increase and how it will impact their individual tax bill. It includes the date, time, location of the Truth-in-Taxation budget hearing. This extensive public notification and hearing process has been successful, making politicians think twice before raising taxes to justify increasing spending.

The other fundamental aspect of Truth-in-Taxation, which is just as important as direct notification, is the ratchet effect that creates an automatic reduction in property tax rates as assessments increase. As assessments or valuations increase, tax rates are automatically decreased, or ratcheted down, to provide local governments the same amount of property tax dollars they received the previous year. If local governments want to increase spending by increasing property taxes, it then triggers a Truth-in-Taxation hearing.

“What this legislation does is reduce mill (levy) rates. Each year, when new valuations come in, the mill levy is automatically reduced, so that those valuations deliver the same dollar amount of property tax to the city or county. Then, if they want to take in more money, they have to tell taxpayers what they want to do and hold a public hearing and then vote on it,” explains Trabert.

The results from Kansas so far have been nothing but astonishing. At this time 52 percent of local governments have decided not to increase taxes. “With 3,780 local taxing authorities reporting, 1,951 decided to not exceed their revenue-neutral rate in accordance with Truth in Taxation legislation.  Another 482 entities are imposing less than two percent increase,” stated Trabert.  The combination of transparency and rate reduction works in tandem to help control and slow the growth of property taxes.

There’s one more factor in play with property taxes.  Think back to those local governments that claimed they weren’t raising taxes just because they weren’t cranking up their levy rates. There’s a term for that and it’s the honesty gap.

The city of Des Moines is just one example of the honesty gap. As the chart below shows, the mill rate has only increased by 3 percent in Des Moines, but property taxes have increased 35 percent. This leads to a 32-point honesty gap. A strong Truth-in-Taxation measure would close the honesty gap and make it harder for local governments to hide behind assessment windfalls. 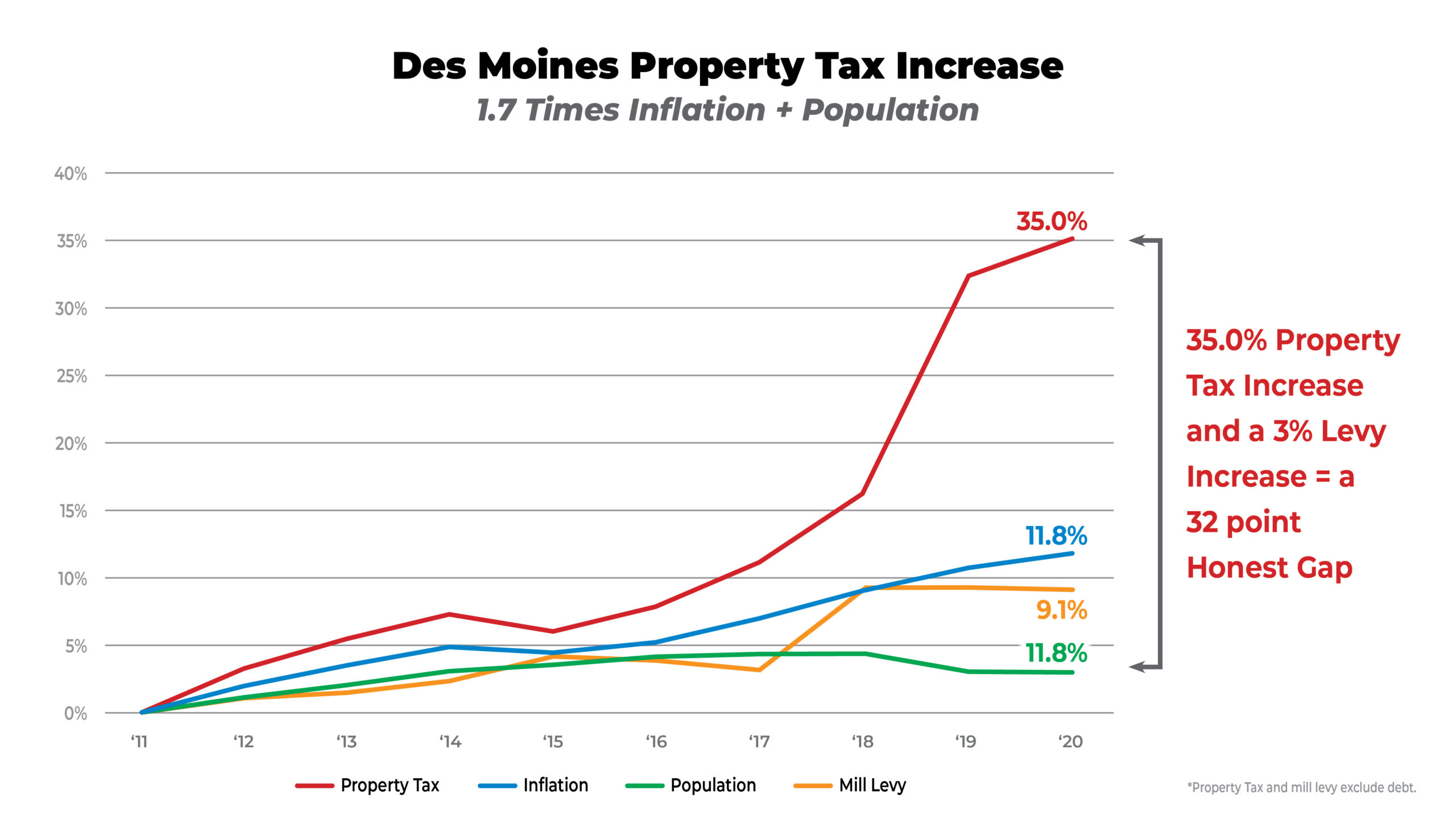 Iowa needs a strong Truth-in-Taxation law. Truth-in-Taxation will force local governments to be honest about their budgets and bring much needed transparency and accountability to the property tax process. Iowa taxpayers deserve better, and they deserve the truth.