Nothing says “overreach” like one government forcing another to spend $1 billion, but of course that’s the situation Iowa’s local governments find themselves in.  As we’ve written about, cities, counties, and school districts in Iowa have collectively received nearly $1.2 billion dollars from Uncle Sam through the American Rescue Plan Act (ARPA) and there are lots of ways to utilize that money.  While the federal government has provided guidelines for the use of ARPA funds, local governments actually have a fair amount of discretion they can exercise when it comes to spending those dollars.

With that freedom, though, comes responsibility.  As our elected officials make decisions, they need to prioritize the taxpayer and they could do that in a number of ways.  Direct property tax relief is one option, but using ARPA funds to build or improve sustainable, permanent infrastructure is a wise choice, too.  Meanwhile, those local governments could move in the exact opposite direction by hiring more employees or making cash grants to undocumented immigrants as some communities are considering.  But we’ve covered prudent uses of ARPA Funds before.  Let’s take a look at how Iowans feel about it.

In the most recent ITR Foundation Poll, we asked what the top priority should be for local governments when it comes to using ARPA funds.  Improving infrastructure like roads and bridges was overwhelmingly the top response, with 45% of poll respondents identifying it as their preference.  In fact, it was clearly the top choice among every demographic group that was surveyed.  Cutting property taxes was the next most favored use.  On the other end of the spectrum, giving grants to undocumented immigrants was the least popular choice among the seven options offered, with just 0.4% of Iowans choosing that as their first priority.

Given the lack of support to prioritize grants to undocumented immigrants, it is not a surprise that an overwhelming majority of respondents believe undocumented immigrants should not get ARPA funds from local governments.  When asked, “Do you think a portion of local government’s American Rescue Plan funds should be used to provide one-time payments to undocumented immigrants who were excluded from receiving stimulus checks, unemployment, and other federal benefits?”, nearly 75% of Iowans said “no”.  While 93% of Republicans and 86% of independents were against that type of payment, it was also the top response of Democrats (49%) who were surveyed. 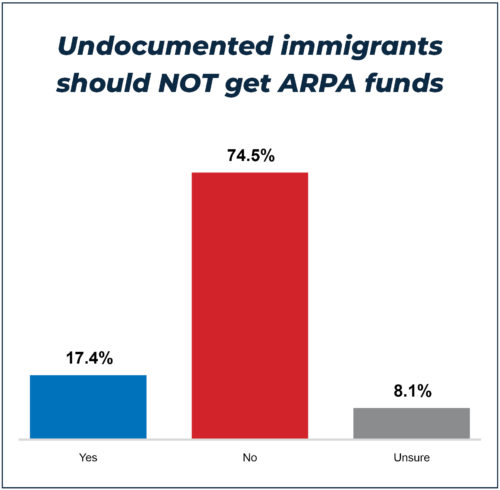 Some of these spending decisions will be finalized this month as local governments complete their budgeting process for the next fiscal year.  There may be no better time than now to let them know how YOU feel about spending taxpayer dollars.  If you want to start a conversation with your local officials or if you want to see how your local governments have been growing, head to ITRLocal.org.