“Today’s legislation ushers in a new era of growth and opportunity in Iowa,” said Governor Kim Reynolds when signing the 2021 tax reform bill into law. “But we are not done yet. Next year, I’ll be proposing additional income tax cuts as we continue to make Iowa the most attractive place in America to open a business, raise a family, and start a career,” stated Governor Reynolds. Iowa was one of 15 states that passed tax reform bills in 2021, continuing the work to improve Iowa’s tax climate that began in 2018. As Governor Reynolds has said, however, that work will need to continue.

In 2022, policymakers will have an opportunity to enact historic tax relief. Iowa’s budget finished the 2021 fiscal year with a $1.24 billion surplus, which also means that over $1 billion is sitting in the state’s Taxpayer Relief Fund. It is projected that by summer 2022 the balance of the Taxpayer Relief Fund could increase to $2 billion. Because of an economy that remained open and productive, as well as years of conservative budgeting, the legislature will have an opportunity to deliver large tax cuts.

Iowa’s tax climate matters because it impacts not only the earnings of hard-working Iowans, but it also determines how competitive and attractive the economy will be in comparison to other states. The Tax Foundation, in their 2022 State Business Tax Climate Index, ranks Iowa 38 out of 50 in terms of tax climate. Improving two spots from the previous year’s ranking, Iowa is beginning to reap the rewards of earlier tax changes, especially the 2018 reforms. One reason Iowa hasn’t climbed further in the rankings despite those many positive reforms is so many other states are working to reduce their tax rates, as well. 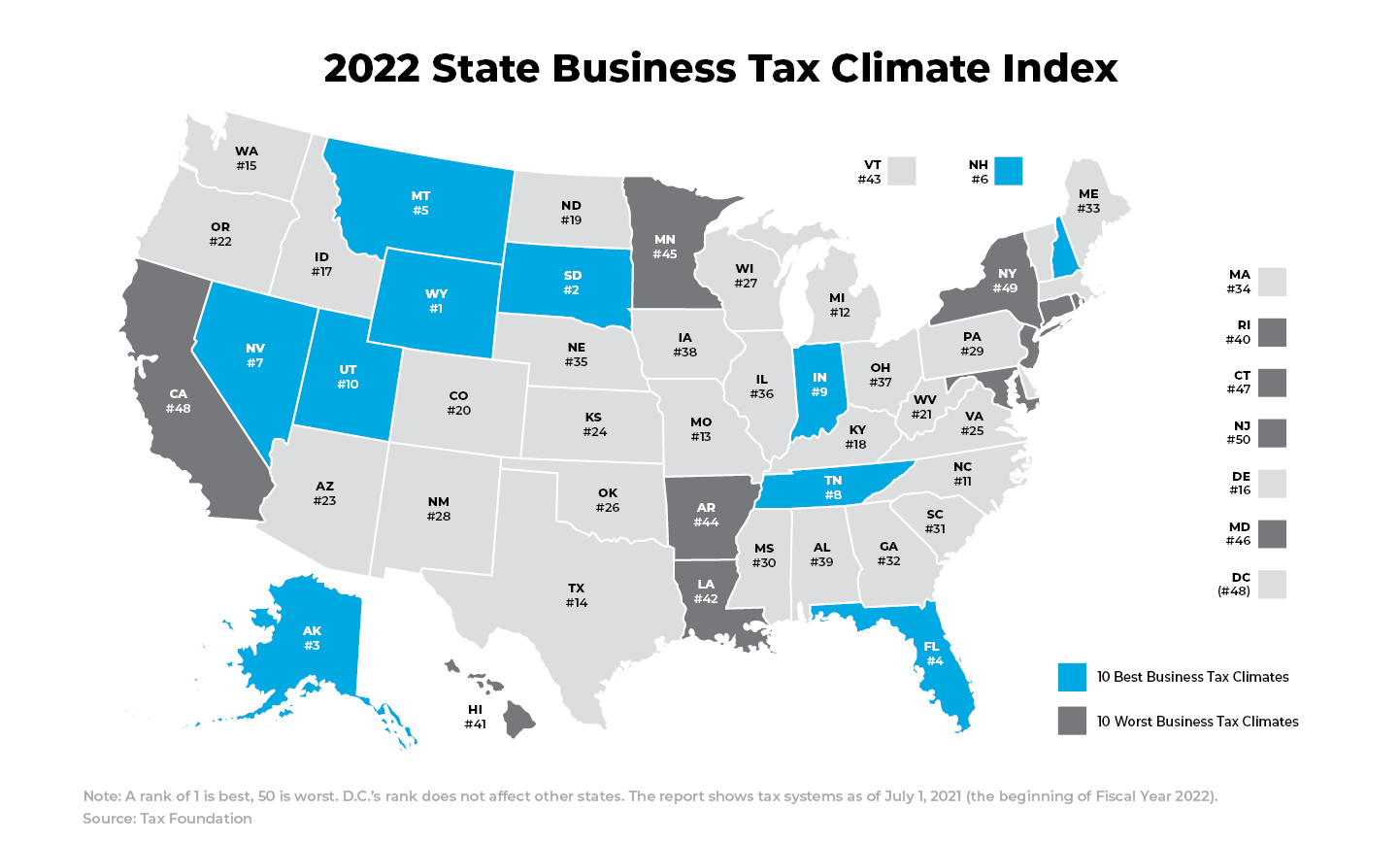 Iowa cannot become complacent as it is competing with 49 other states for both jobs and people. The recent census data demonstrates that states that have low income tax rates, or no income tax at all, are gaining population. Taxes act as incentives and they can encourage or discourage certain economic behaviors. As an example, Iowa has become a leader in the insurance industry. This is due in part to the poor tax and regulatory policies in the state of Connecticut, where many insurers were previously headquartered. Firms have left Connecticut, which used to be first in the nation as a home for insurance companies, and settled in Iowa.

A crucial component of the 2021 tax reform law, besides phasing-out the inheritance tax, was ensuring lower income tax rates go into effect in 2023. The top individual rate will fall to 6.5 percent next year, and the number of individual income tax brackets will condense from nine to four with a bottom rate of 4.4 percent.

In 2021 Iowa’s corporate tax rate was lowered from 12 percent, the highest in the nation, to 9.8 percent, tying us with Minnesota. In comparison, Nebraska passed a corporate income tax cut this year which will gradually lower its rate to 6.84 percent. While corporate tax reform wrongly gets associated with “tax cuts for the rich,” the reality is the cost of high corporate taxes are simply passed onto consumers. High corporate tax rates not only discourage businesses from operating in Iowa, but they also end up hurting productivity and employment.

As the Iowa legislature considers income tax changes in 2022, priority should be placed on further lowering our high rates for individuals and businesses.

A number of elected officials in Iowa have stated that their ultimate goal is to eliminate Iowa’s income tax. Eliminating the income tax is a worthy policy goal and one that ITR Foundation supports, but states such as Utah, North Carolina, and Indiana have enacted pro-growth tax reforms without completely eliminating their income tax. While Utah has been steadily chipping away at their tax burden, that state’s gross domestic product has almost tripled since 1999. In North Carolina, the Tar Heel State’s historic tax reforms have continued and in 2021 lawmakers there passed a plan to phase out the corporate income tax by 2030.

Lower tax rates may take time to fully implement, but policymakers have numerous policy tools they can choose to utilize. Revenue triggers, phased-in rate reductions, eliminating tax credits and incentives, and broadening the sales tax base, among other measures, can be used to help lower income tax rates. Legislators can also simply control the growth of spending and bring tax rates down accordingly. While elimination should be the long-term goal, Iowa’s immediate focus should be continuously lowering tax rates.

One word of warning about the use of revenue triggers before tax rates can be cut: triggers are meant to be budget safeguards, not roadblocks to cuts.

It is likely that the most challenging barrier to tax reform will be the need for policymakers to say “no” to the numerous special interests arguing for new or additional spending. When every other argument is peeled away, spending demands are the leading driver of high tax rates.