After multiple rounds of negotiations, the United States Senate recently passed the Inflation Reduction Act (IRA) by a strictly partisan margin of 51-50, with Vice President Kamala Harris casting the deciding vote in favor of the bill.  As the name implies, the purported aim of this effort, which the House of Representatives will soon consider, is to slow down the historic levels of inflation America is experiencing.  Only in Washington, D.C. could someone refer to a $750 billion bill as “anti-inflationary” with a straight face.

In fact, CNN has reported that the bill may not live up to its name, and U.S. News and World Report predicts inflation isn't likely to decline. Researchers at the University of Pennsylvania have even calculated that inflation will actually increase through 2024 and declared they have “low confidence that the legislation will have any impact on inflation.”  Nonetheless, Congress is poised to give the IRA to Americans, with some elected officials touting the cost savings the bill will bring to consumers, especially through the credits that will promote electric vehicles and solar panels.  Below is a brief analysis of those cost savings claims along with some real-world examples to shine a light on the most recent deal struck between President Joe Biden and Senate Majority Leader Chuck Schumer.

Electric Vehicles:  This provision modifies and extends through 2032 the existing $7,500 tax credit that is available to purchasers of a new electric vehicle.  While all of the specific rules surrounding the credit haven’t been issued yet, let’s assume that Ford’s popular Mustang Mach-E will qualify for the new credit and that the base model could be purchased for $43,895 as Ford advertises.  Overly simple math that ignores things like taxes and fees computes a net cash outlay of $36,395 ($43,895-$7,500) is required to obtain the IRA’s savings on an electric vehicle.

Solar panels:  The solar panel provision, like the electric vehicle provision, also provides a ten-year extension of an existing tax credit.  The IRA will continue to cover 30 percent of a residential solar panel project.  A very unscientific Google search for “average cost of solar panels” turned up a number of sources, including Forbes, that pegged the average cost for solar panel installation onto a home at $16,000.  The 30% credit would equal $4,800, meaning the net cash outlay for the solar benefits would be $11,200 ($16,000-$4,800).

If an American family took advantage of the two provisions above, they’d have to shell out nearly $48,000, and that’s AFTER the government’s tax credits were accounted for.  Most families, whose budgets are already under assault from extreme inflation, probably won’t view $48,000 in expenditures as saving money.  Since the IRA won’t actually reduce inflation, and it won’t deliver savings that most households are interested in receiving, what exactly will the bill do? 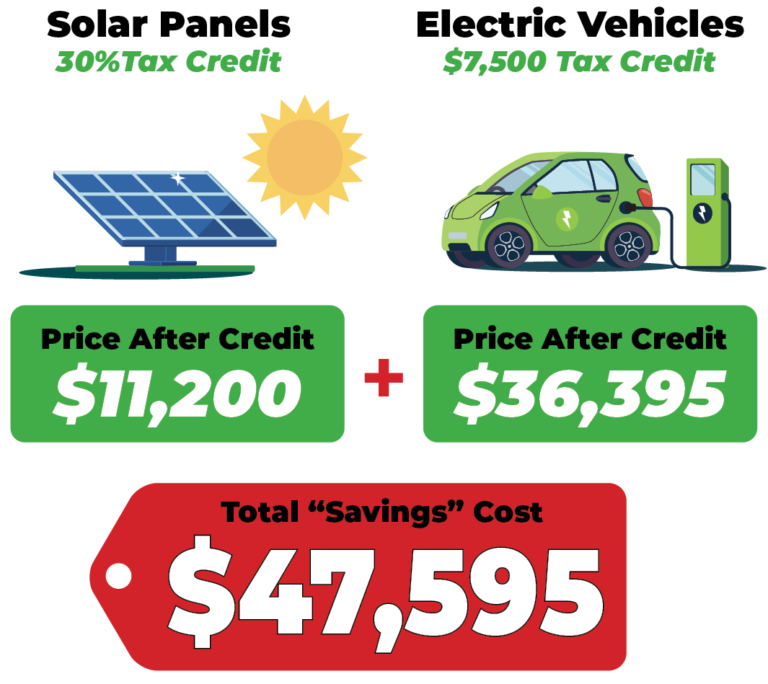 The IRA utilizes the tax code to promote an agenda of green energy and climate change programs.  In addition to the menu of tax credits and incentives the legislation offers, it also includes a tax increase on carried interest for individuals and a minimum amount of taxation for some of our country’s largest corporations.  Maybe the most likely way average Americans will have their taxes impacted, though, is by the $80 billion dollars that will be given to the IRS, $46 billion of which will be devoted to enforcement.  For perspective, the annual budget of the IRS is currently just shy of $13 billion.  As Robert W. Wood writes for Forbes, “…make no mistake, enforcement is the main directive from Democrats to the IRS. Get bigger, tougher and faster at collecting, and make them pay.”

We have finally arrived at the real goal of the Inflation Reduction Act.  It may not bring about reduced inflation or cost savings, but it will subsidize a giant push for green energy and a similarly large push to grow the IRS’s budget to squeeze more tax dollars from all of us.  Those costs will be funded in part by tax increases that many Americans won’t see directly, unless of course they are subject to investigation by one of the new IRS enforcement officers.   While some are celebrating this as a major win for President Biden, we wonder if voters understand what they are really receiving.

The IRA is a dime store version of the Build Back Better plan, an initiative President Biden couldn’t get through a Senate controlled by his own party. Further increasing spending and raising taxes is unwise fiscal policy in our current economic situation.  Leaders in Washington, D.C. should spend less time playing word games to redefine recession or trying to fool people with the deceptively-named Inflation Reduction Act.   Americans who are suffering from the consequences of inflation deserve better.