The roadmap to tax reform begins with a prudent budget and that’s precisely what Governor Kim Reynolds is planning for Iowa.  For Fiscal Year 2023, which begins this July, Governor Reynolds is proposing an $8.2 billion General Fund budget.  That amount equates to an increase of nearly $100 million dollars in new state spending for the budget as a whole.

This budget proposal reflects funding the priorities of Iowa government.  For instance, the governor wants to increase public school funding by $154 million and mental health funding by $71 million.  By growing government at a responsible rate like this, tax cuts are possible.  Governor Reynolds’ tax reform proposal, which begins to lower rates and eliminates taxes on retirement income next year, will transform Iowa’s tax climate from one of the nation’s worst, to one of its best.

Neither the Iowa House nor Senate have released their budget targets yet, as the legislature must wait for the March meeting of the Revenue Estimating Conference (REC).   The REC is tasked with providing revenue estimates and in the December meeting, it projected continued growth in state revenue. The updated estimate provided in the March REC meeting is important because the legislature is required by law to base the General Fund budget on the lower estimate of the December and March projections.

Iowa’s economy has recovered from the pandemic triggered downturn, in part, because of a history of conservative fiscal governance, not to mention the hard work of Iowa’s families and businesses.  The current estimate for Fiscal Year 2023 could result in close to a $1 billion surplus if the governor’s budget is passed, which would be on the heels of a similar sized surplus for 2022.  These large budget surpluses have become a trend in Iowa and are the best illustration of why permanent, structural tax reform is badly needed here. Looking back, Iowa ended Fiscal Year 2021 with a $1.24 billion surplus and the previous year, Iowa’s surplus was $305 million.  Because of these surpluses, Iowa’s cash reserves are at their statutory limit of nearly $1 billion.

While it’s important to understand the need for tax cuts, it’s equally important to understand how Iowa plans to spend taxpayer dollars. After all, spending and taxes are two sides of the same coin.  Education and Health and Human Services continue to be the main drivers of the General Fund budget. These two functions of state government consume close to 80 percent of the General Fund budget, which does create a risk that funds for other areas of state government, such as the Judicial Branch or Public Safety, could be crowded out. This will be an important dynamic for lawmakers to be mindful of in the future. 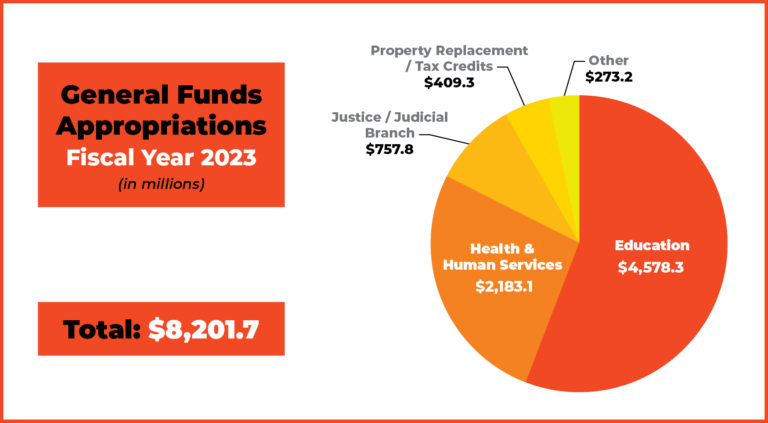 Governor Reynolds’ education proposal represents a 2.5 percent increase for school aid. In her Condition of the State address, Governor Reynolds stated that education continues to be a priority and she reminded Iowans that it consumes 56 percent of the budget. The Governor noted that in the last decade education spending has increased by nearly $1 billion.

Health and Human Services is the second largest budget driver. Medicaid consumes a significant majority of this portion of the budget. Iowa’s Medicaid program has grown considerably and as of December 2021, 240,000 Iowans were enrolled in the program. Since March 2020, 60,000 Iowans have been brought onto the Medicaid rolls. Medicaid is a joint federal-state program.  In Fiscal Year 2021 it consumed close to $2 billion of Iowa’s General Fund, while the federal government contributed $4.2 billion to cover Uncle Sam’s share of the program .

All told, Governor Reynolds has proposed a conservative Iowa budget that goes hand in hand with pro-growth tax cuts.  This is a great starting point as we await proposals from the House and Senate later in the session.