Iowa Has the Homefield Advantage… with Taxes

Once Iowa’s tax reform is fully implemented, its tax ranking should jump to 13th-best in the nation — one of the best in the Midwest, leaving the other Big Ten teams in the dust.

The Nebraska Cornhuskers are traveling to Iowa City today to play the Hawkeyes, but Iowa has more than a homefield advantage for the game. Football isn’t the only competition in which Iowa ranks higher than Nebraska; our numbers are better when it comes to tax policy, too.

For many years, both Iowa and Nebraska had rotten tax systems that imposed high rates on the income of working families and small businesses. As Iowans watch the 2022 Thanksgiving kickoff, they can cheer that their business competitiveness is rushing past Nebraska’s.

In 2019, with its favorable tax treatment of veterans and retirement incomes, Iowa was the #1 destination for relocating Nebraskans. More than half of Nebraska’s population — from blue collar workers to entrepreneurs — lives about a one-hour U-Haul drive from the end zone and the extra point of Iowa’s tax relief.

Governor Kim Reynolds and the legislature recently passed the most extensive tax-reform measure in the nation. This means Iowa will quickly move up the field of the tax rankings to have one of the best systems in the country.

The nation’s leading independent tax research organization, the Tax Foundation, publishes remarkably commonsense tax reform playbooks for both Iowa and Nebraska. Both states share an agricultural economy and are below the national average for employment and population growth. But the Hawkeyes chose to follow the Tax Foundation’s advice for a tax policy blitz. Nebraska, on the other hand, has struggled with a strategy of incremental yardage.

Iowa has created a better environment for opportunity in the Midwest, while Nebraska’s taxpayers watch from the sidelines. The following map from the Tax Foundation shows Nebraska still ahead of Iowa, but the current reforms haven’t been factored in, yet. Once Iowa’s tax reform is fully implemented, its tax ranking should jump to 13th-best in the nation — one of the best in the Midwest, leaving the other Big Ten teams in the dust. 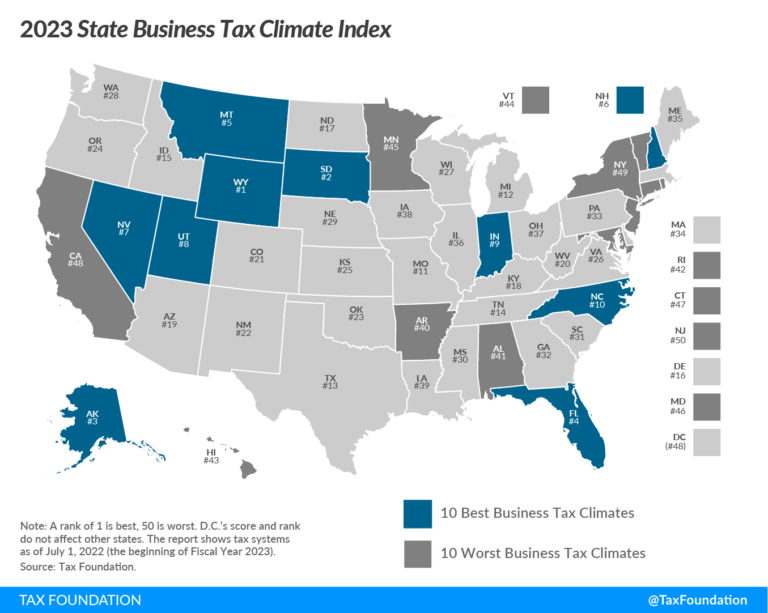 Maybe Governor-elect Pillen will take a play from Governor Reynolds’s book to overcome special interest obstruction and the economic fumbles of the Biden administration to deliver meaningful tax reform. If not, Iowa’s rivals will become Indiana and Michigan… both on the field and in the tax game.