Iowa in Strong Position Thanks to Continued Revenue Growth

July 1 marks a very important date in the world of state government – the beginning of a new fiscal year. While the state has technically closed the books on fiscal year 2022, the accounting of funds is far from over and final numbers won’t be available until October. But no matter how 2022 is evaluated, Iowa is in a strong position moving forward.When assessing the state’s situation from a cash basis perspective, which means counting the money as it is received, the fiscal year ended $716.8 million, or 8%, higher than the previous fiscal year. However, state accounting is on a fiscal year/accrual basis. This means that there is still activity taking place after June 30 that will ultimately be associated with the fiscal year that just ended. Under this accrual basis, the state currently sits at $995.3 million, or 12.3%, higher than last fiscal year. Either way you look at it, the state has far surpassed the $370.9 million, or 4.3%, increase in revenue that the Revenue Estimating Conference’s (REC’s) forecast expected the State of Iowa to collect.

The chart below shows the revenue for the last three fiscal years, of which FY 2022 is the strongest of them all. 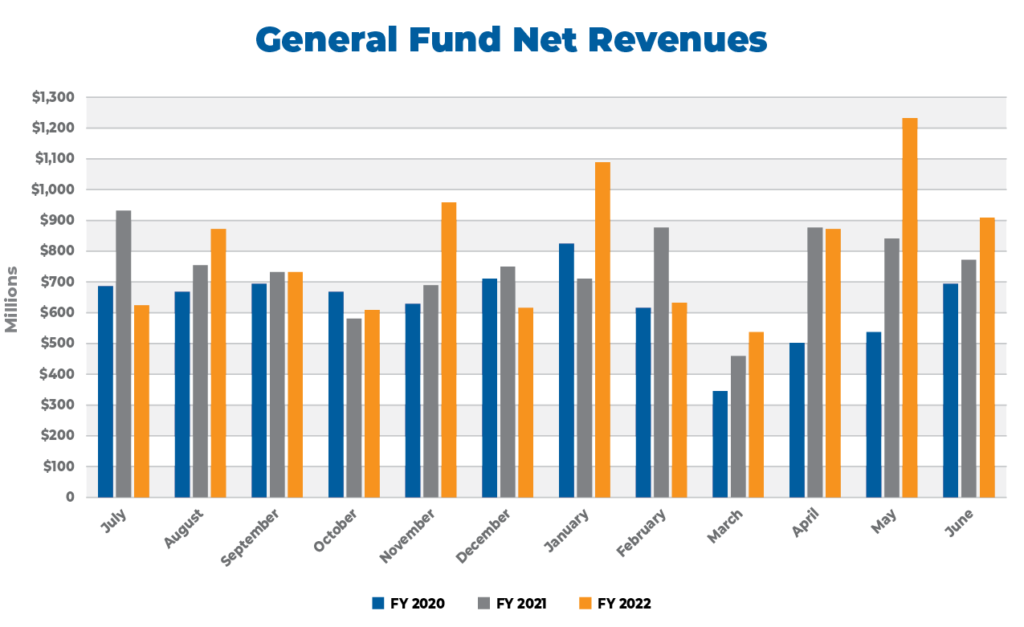 The two largest revenue generators for the state are the personal income and sales/use taxes, which showed continued strong growth rates of 16.6% and 8.3% year to date, respectively. The only tax to see a decline in collections is the inheritance tax, which is down 6.5% compared to the last fiscal year. This was an expected decline, however, because the legislature rightfully repealed the antiquated tax, gradually phasing it out over several years.

Affirmation of the strong financial position Iowa maintains, which enabled the recently enacted historic tax reform package, is the key takeaway from this revenue report. Even during times of inflation, supply chain challenges, and pandemic-related interruptions, Iowa’s economy has remained in great shape, with one of the nation’s lowest unemployment rates.

The tax cuts are also proving to be well timed. Iowa has been posting budget surpluses since 2020, and 2022 continued the trend. Returning this money to the taxpayers of Iowa is the right thing to do.

Both the cash basis and fiscal year/accrual basis show that regardless of how it’s measured, the State of Iowa has plenty of revenue to cover its necessary spending responsibilities, while also providing taxpayers relief. Naysayers said the tax cuts would put the state in a bad fiscal position, but the revenue reports continue to prove that narrative wrong.