Iowa Poised to Make a Move 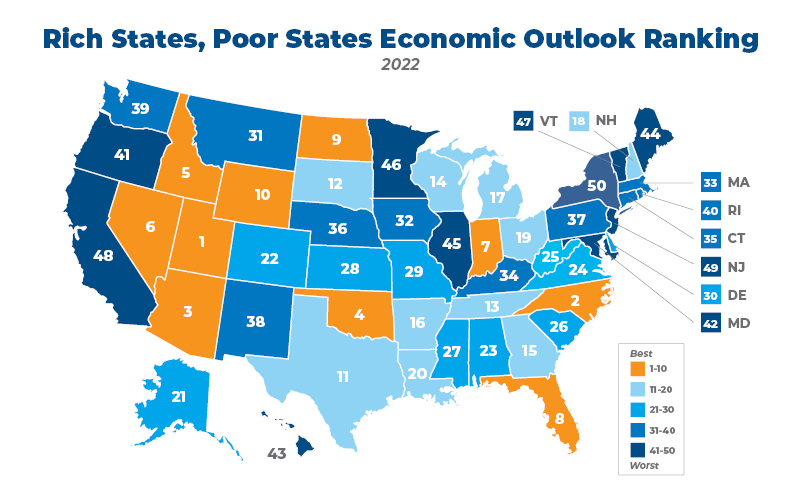 Since the inception of Rich States, Poor States, Utah's economic outlook has been ranked first in the Index every year. This year, North Carolina’s outlook received the second highest ranking. Utah and North Carolina have both enacted fiscally conservative policies that reduced tax rates and kept them low. North Carolina, especially in recent years, has been an example for other states who want to reap the benefits of an improved economy by controlling spending and reducing tax rates.

Beginning in 2013, North Carolina has been implementing multiple rounds of meaningful tax cuts. This past year their legislature cut the flat individual tax rate to 4.99 percent and the rate will continue to be lowered until it hits 3.99 percent in 2027. The 2.5 percent corporate tax rate will be phased out entirely by 2030.  As a result of these types of tax reforms North Carolina has improved its rankings in Rich States, Poor States significantly over the past decade.

Interestingly, Iowa didn’t slip in the rankings because we went on wild spending sprees or cranked up tax rates.  Rather, Iowa essentially stood still while North Carolina and other states steadily moved down a path of pro-growth reforms.  In a competitive economy, the status quo just doesn’t cut it.

The good news for Iowans is our state is no longer standing still.  In fact, Iowa has sparked a tax reform movement this year, continuing a recent trend. Since 2018, Governor Kim Reynolds and the legislature have enacted three rounds of tax cuts that have lowered both the individual and corporate income tax rates. In addition, the legislature has eliminated the inheritance tax, which will soon be phased out completely. By 2026, Iowa will have a flat 3.9 percent income tax and the corporate income tax will slowly be reduced until it reaches a flat 5.5 percent.

Consider the following categories (shown with their current ranking) which are all set to improve:

In addition to the coming tax changes, Iowa is already doing well in some of the other categories used by the Index to rank the states:

Once fully implemented, Iowa’s improved tax code will almost certainly lead to a higher ranking in the Rich States, Poor States rankings.  Governor Reynolds and the legislature understand that Iowa is in economic competition with other states and more people are responding to tax rates by voting with their feet.  This was one of the reasons why they passed such a sweeping tax reform measure this year.

However, even with Iowa’s recent progress, policymakers must think about what’s next. Other states are enacting significant tax reforms too, and they will continue to do so. As an example, Missouri is considering legislation that would not only further lower its individual income tax rates, but also eliminate the corporate income tax by 2023. Based on this year’s rankings, Iowa sits squarely in the middle of our neighboring states, a reminder that complacency is not an option. 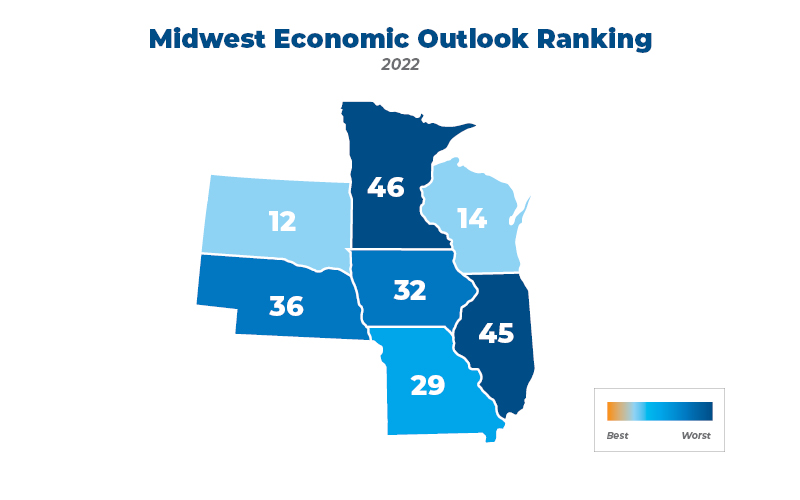 Finally, Rich States, Poor States serves as another notice that Iowans suffer from a heavy property tax burden, coming in at 38 this year. High property taxes not only hurt taxpayers, but they also discourage economic growth. Taxpayers across Iowa are demanding a policy solution for high property taxes. A priority for the 2023 legislative session should be the enactment of a strong Truth-in-Taxation property tax reform measure that will finally provide relief.

Iowa and North Carolina had a nearly identical outlook a decade ago.  Since then, North Carolina has deservedly been referred to as the Gold Standard of tax reform.  It won’t be long until people across the nation are talking about Iowa’s reform story in a similar way.