Iowa Sales Tax Holiday is No Cause for Celebration

A sales tax holiday is a limited time period during which a state frees purchases of specific items from state and local sales tax. At first glance this seems like a good policy from a tax-skeptical, pro-consumer perspective — giving people a break — especially when times are tough, as they are, now, with high inflation. However, sales tax holidays create complexities for tax code compliance, do not promote economic growth or increase consumer purchases, and distract policy makers from truly beneficial sales tax reforms.

The concept has been around for a while, starting with Ohio and Michigan offering tax holidays for automobile purchases in 1980. Nationwide, the policy was not very popular until 1997, when New York tried it as a solution to citizens’ practice of border shopping — traveling to nearby states to take advantage of lower sales tax rates. The idea caught on, and a wave of states adopted such policies, although New York has since abandoned its own. By 2022, 17 states held sales tax holidays at some point during the year, Iowa being one of them.

Iowa implemented its sales tax holiday, held annually on the first Friday and Saturday of August, in 2000, restricting it to clothing and footwear priced less than $100. The policy has become popular, particularly because of its alignment with back-to-school shopping.

During the last few legislative sessions, some Iowa lawmakers have proposed extending the holiday, while others have introduced legislation to expand it to include emergency preparedness supplies. However, review of the evidence finds that Iowa should, instead, repeal the policy currently on the books.

While sales tax holidays have been politically popular during the twenty-first century, academics, economists, and analysts across the political spectrum have all concluded they are not good policy. The left-leaning Institute on Taxation and Economic Policy (ITEP) reports that “their benefits are minimal while their downsides are significant.” Meanwhile the more-right-leaning Tax Foundation states, “Sales tax holidays neither promote economic growth nor increase purchases. They create complexities for all involved, while inserting the political process into consumer decisions.”

The prominent tax scholar John Mikesell found that “[s]tate lawmakers are in the position of making a politically attractive decision with the cost of that decision being borne by someone else (local lawmakers), [a condition] ripe for poor policy choices.”

With such broad consensus that sales tax holidays are conceptually flawed, many states have found the political will to acknowledge the economic truth and either repeal or temporarily suspend their states’ policies, mainly when facing significant revenue gaps. For example, during the height of the Great Recession, lawmakers in Florida, Georgia, Maryland, Massachusetts, and the District of Columbia (D.C.) all canceled their holidays. Over the following decade, most reinstated them, but Georgia’s and D.C.’s holidays have not resumed, and those in Illinois, New York, North Carolina, Vermont, and Wisconsin were either short-lived or repealed. 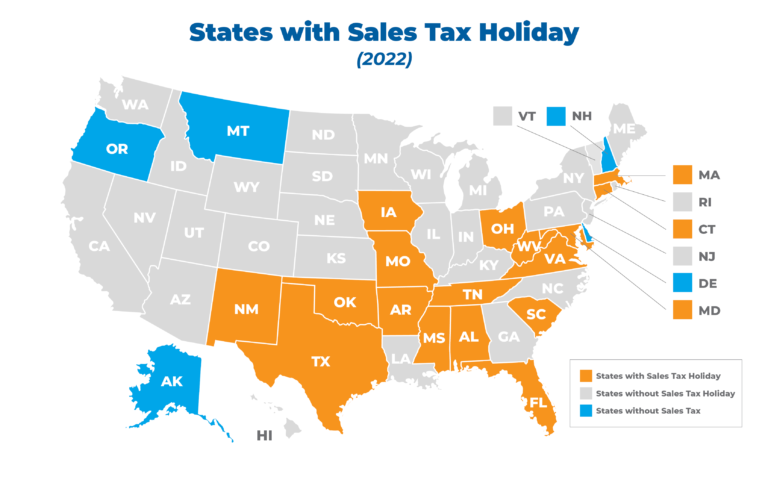 On a map of the states with sales tax holidays, Iowa is an outlier. The only neighboring state joining Iowa is Missouri. The population along the border between these states is relatively sparse, however, so any sales tax holiday in Iowa primarily benefits the citizens of non-holiday states along more-populous borders, such as those who live in the Quad Cities in Illinois, near Sioux City in Nebraska and South Dakota, and the Omaha metropolitan area.

The Iowa Department of Revenue estimates the state missed out on $4.7 million in revenue during the most recent sales tax holiday. Adding emergency preparedness to the list of tax-free items as proposed would reduce revenue to the General Fund, the Secure an Advanced Vision for Education (SAVE) Fund, and local option sales tax (LOST) by an additional $3.6 million, for a total exemption of $8.3 million per year.

While this may at least appear to represent a form of tax relief, the bottom-line reality is different. Research has found that retailers increase their prices to capture much of the savings, resulting in less of the relief that politicians intend for low-income individuals. On the other side of the ledger, the reduction of funds to schools and local governments through the SAVE and LOST programs will affect local government decisions, perhaps including increases in property taxes.

Tax reforms enacted over the last few years have put Iowa on a good path forward. The state should continue its momentum by removing poorly conceived tax exemptions to offset the revenue effects of more-beneficial reforms, such as an across-the-board sales tax reduction.

Holidays are valuable opportunities for Iowa families to relax and recover, but sales tax holidays have no reviving effect and, instead, allow the revenue-collecting work to weigh even more heavily on the other days of the year.