For several years we have praised North Carolina for its historic tax reform. The Tarheel State is the gold standard for prudent state tax policy that pairs conservative budgeting with shrinking tax rates. Governor Kim Reynolds and Iowa’s legislature have followed a similar path to deliver pro-growth tax reform by balancing restrained spending growth with income tax cuts. Years of prudent budgeting enabled the passage of historic tax reform this year, which will create a flat 3.9 percent income tax rate by 2026.

Since 2018, Iowa has made considerable progress in improving its tax code with three separate rounds of tax cuts.  As a result, economic growth and opportunity have increased in our state. Governor Reynolds and the legislature deserve credit for approaching tax reform in a responsible manner.

Iowa has morphed into a national leader on state tax policy, but you don’t have to take our word for it.  Jared Walczak, Vice President of State Projects at the Tax Foundation, wrote that the “transformation of Iowa’s tax code is certainly remarkable.”

Walczak summarized the progression of tax reform in Iowa from 2018 up to the historic tax bill just recently signed into law:

In 2018, Iowa had a nine-bracket individual income tax with a top marginal rate of 8.98 percent and a graduated-rate corporate income tax with a top rate of 12 percent, both with alternative minimum taxes; an inheritance tax; and a well-intentioned but distortive policy of federal deductibility. Once current reforms have phased in, Iowa will be able to boast a 3.9 percent single-rate individual income tax, a 5.5 percent flat corporate income tax, and no inheritance tax or alternative minimum taxes. Improvements have been made to the state sales tax base and several tax credits have been reformed. Additionally—a more mixed bag economically—the state will exempt retirement income and certain farm rental income from taxation.

As a result of the 3.9 percent flat tax, Iowa’s rankings in the Tax Foundation’s Business Tax Climate Index will improve. “Before the reforms of 2018 took effect, Iowa ranked 46th overall on our State Business Tax Climate Index, a measure of state tax structure. With the full phase-in of the newly enacted reforms, Iowa would rank 15th overall, an improvement of 31 places,” noted Walczak. 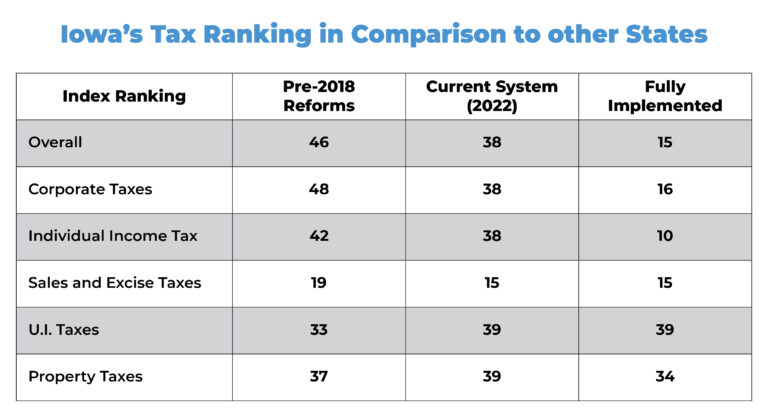 In fact, Iowa will join North Carolina for its noteworthy progress in improving the state’s tax climate. “This would tie North Carolina for the largest improvement in the Index’s history. In the wake of historic reforms beginning in 2013, North Carolina improved from 41st to 10th overall in seven years (currently 11th),” stated Walczak. 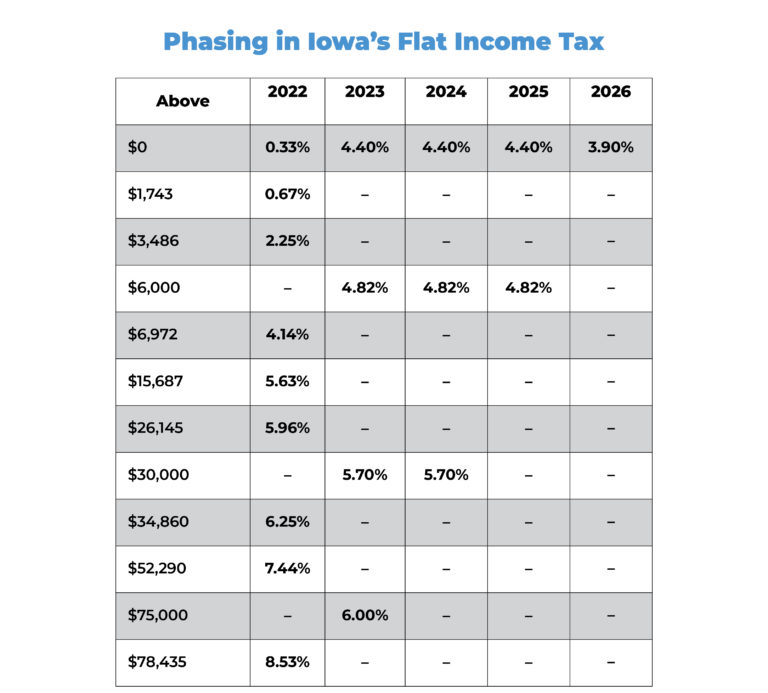 Iowa’s historic tax reform will be a benefit for all taxpayers. Iowa’s tax climate will also be more competitive, and this will help create more opportunities for attracting both people and businesses. States are in competition and low tax rates are key for a pro-growth economic policy.

More work can still be done in improving Iowa’s tax climate (we’re not #1 yet!), but Iowa is now the gold standard example for tax reform in the Midwest.