Even with continued inflation, a national recession, and a workforce shortage, the state’s net General Fund revenue for the month was $198.6 million (32.7%) above October 2021.

Iowa’s revenue report for October has been released and the news for the month continues to depict a positive fiscal situation heading into the holiday season. Even under the weight of continued inflation, a national recession, and a workforce shortage, the state’s net General Fund revenue for the month was $198.6 million (32.7%) above the October 2021 net revenue level.

When broken down by the three largest sources of revenue-personal income tax, sales/use tax, and corporate income tax-receipts compared to 2021 are detailed below (directly from the LSA Revenue Memo):

While the most recent Revenue Estimating Conference (REC) prediction from just three weeks ago forecast the current fiscal year to decrease $264.7 million (-2.7%) year-over-year, we still have not seen that prediction come to fruition as the state continues to post revenue growth.  It is important to note that a big driver of the projected revenue decline is the impact of multiple pieces of legislation passed during the 2022 legislative session, including the historical tax cuts enacted in March. Even as more of those cuts are scheduled to be phased in during January, it appears that Iowa’s revenue is in a much stronger position than anticipated.

As illustrated in the following chart, total General Fund revenues for Iowa are closely tracking those from last year so far.  Historically, both November and January post large sums of revenue, which will give us a better understanding of the state’s revenue trend.  The next REC meeting will be held in December 2022 and will provide more information before the opening day of the new legislative session in January. 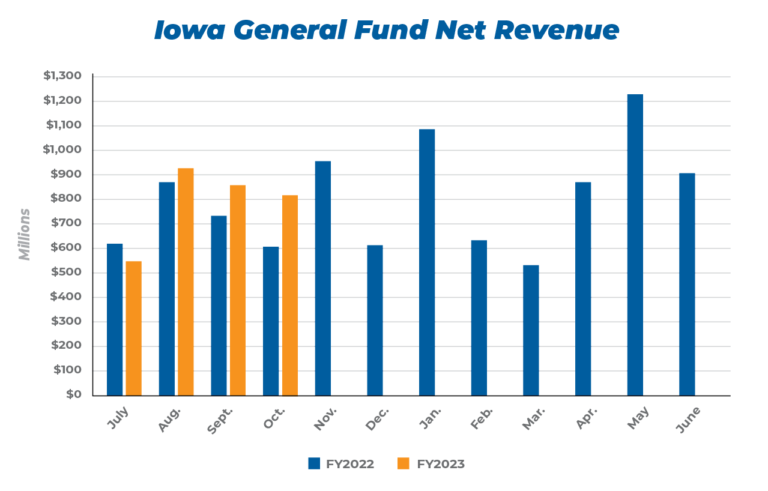