Iowa’s property tax was first enacted in 1839.  Although it has undergone several changes over the years, it continues to be a substantial burden to taxpayers across the state.

Iowa’s property tax has had a tumultuous history. Iowa’s territorial legislature enacted the first revenue act in 1839, creating a tax levy on real and personal property. This form of taxation continued after statehood and was the primary source of revenue for both the state and local governments. In 1872, Iowa’s first major tax reform made changes to taxation on railroads and assessments. Both historians and academics have considered Iowa’s revenue system to have been a failure over the next 50 years, and its property tax system became one of the most burdensome in the nation. The 1910 Census exposed Iowa as the only state in the nation that had lost population since 1900, and its growth in manufacturing and commerce was noticeably less than in other states. The consensus view was that the tax environment was to blame.

The most comprehensive tax legislation in the State of Iowa to date passed in 1911. Many of the special tax levies we still have today, such as for roads and bridges, appeared that year, and responsibility for assessments switched from townships to the counties, creating the role of county assessor. Providing evidence that the tax changes worked, Iowa’s municipal population increased by 21%, or 234,631 people, soon thereafter.

Between 1910 and 1921, Iowa’s property tax levy increased annually by 11.7%, mostly due to the economic prosperity of the time. Per capita personal income nearly doubled, and inflation, urbanization, and changing technology added significantly to government expenditures. Nevertheless, Iowans’ displeasure with their property taxes continued, and people continued to find inequities and problems with it. The tax’s collections accounted for 80% of all tax revenue during this time.

In the late 1920s, Iowa farmers banded together to promote the idea of consolidating the rural one-room schoolhouses as a fix for the unequal burden of property taxation. More than 2,000 one-room schools were closed across rural areas of the state, and in their place, 385 consolidated schools were established, largely on a regular high-school basis. Even then, many believed the solution to property tax challenges, particularly in the rural districts, lay in the field of school finance reform. 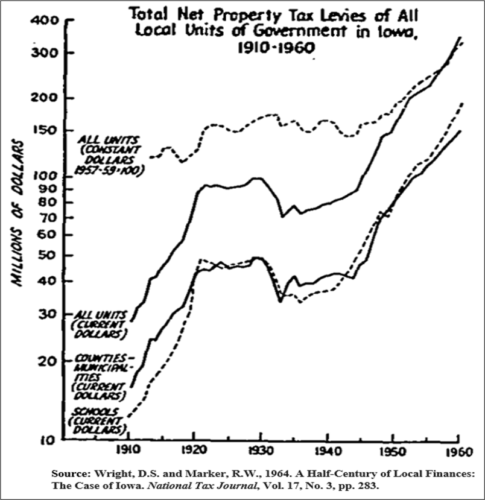 The Great Depression was a catalyst for great change of property taxes in Iowa at both the state and local levels.  In the early years of the Depression, Iowa lawmakers permitted counties’ sale of bonds to pay for unemployment relief, which doubled the county tax levy during this time. When lawmakers realized that property taxes could no longer be their primary source of revenue, the state enacted a new revenue law on March 1, 1934, creating a personal income tax, a corporate income tax, and a sales tax.

The proceeds from these new taxes were intended to be used to support state government, pay the administrative costs of collecting the new revenue, and finance an emergency poor relief program. The remainder would go to the counties based on their assessed property valuations. Specifically, the sales tax was created to finance emergency relief measures and, at the same time, furnish some tax relief to the owners of property. The state abolished its tax on tangible property, yet the $6-per-thousand state levy (the mill rate) on intangibles remained. Iowa also created a homestead law, providing a rebate on a portion of the property tax paid by homeowners.

These new taxes, although intended to serve as partial replacements for burdensome property tax levies, did not remedy the weaknesses and inequalities of the property tax system. Critics felt state legislators missed an opportunity to enact constructive legislation relating to the administration of the property tax, such as having the state centralize control over property assessments and the appointment of local assessors, who would be responsible to the state board of assessment and review.

The 1970s brought another big push for property tax reform. In 1971, the General Assembly of the Iowa Legislature passed a bill, House File 654, creating an education funding formula with a uniform mill rate set at $20, with a state aid target set at 70% of the cost per pupil. Shortly thereafter, in 1973, the state repealed the personal property tax, and the property tax credit for the elderly and disabled was expanded. In 1978, the state divided property into different classes and implemented a complex system of statewide assessment limitations, also known as rollback provisions.

While continuing to collect more property taxes per capita than the national average, the state legislature did relatively little to change property taxes over the next few decades. School funding stayed relatively the same until 1986, when the minimum uniform school levy rate changed to $5.40 per $1,000 of assessed value, which was then followed by a complete restructuring of the school funding formula in 1990. In 1995, the state revamped how it paid for mental health services, with the aim of lowering the county’s property tax rates, and in 2003, the legislature considered a reform of the property tax system but failed to enact it.