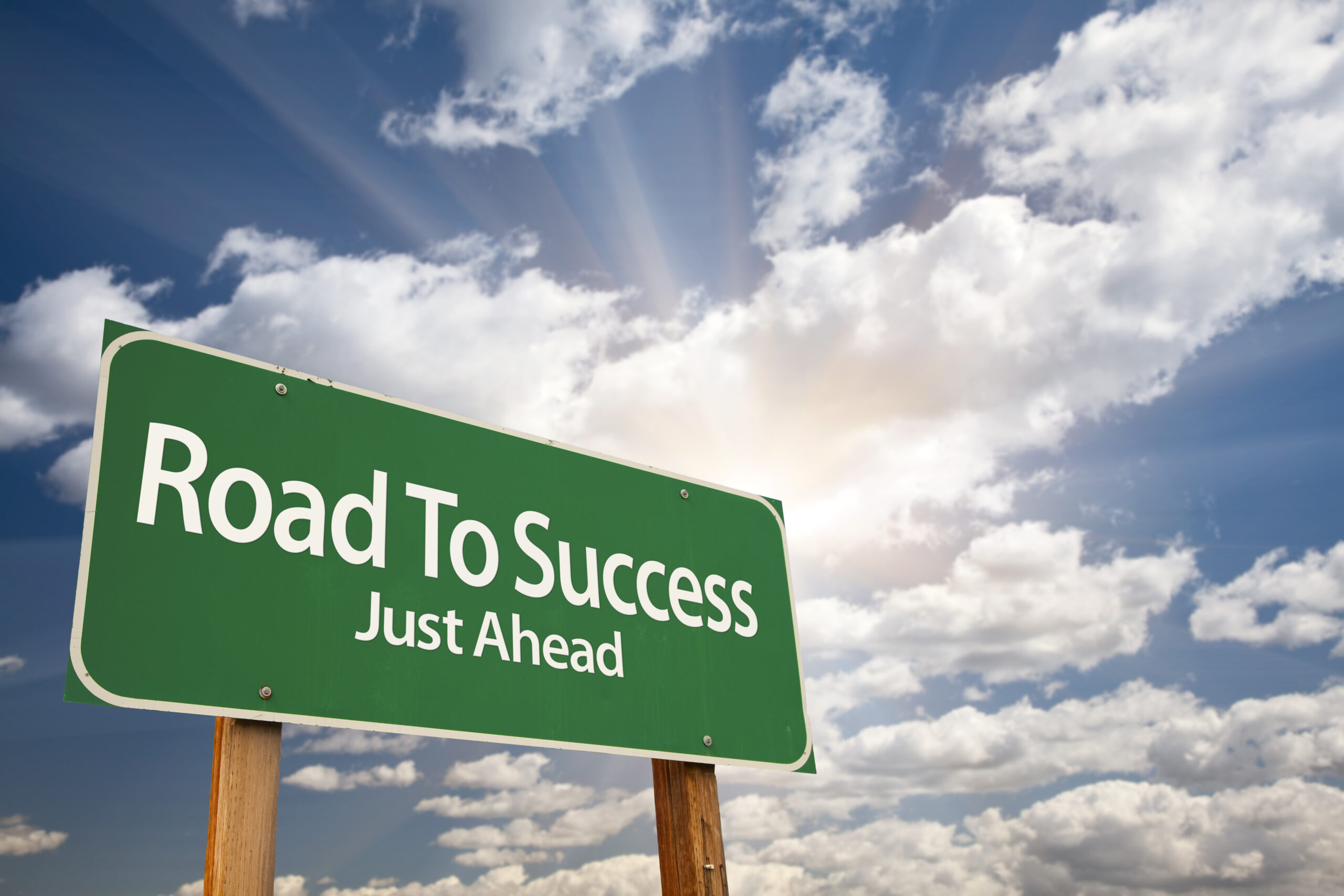 On January 11, 2021 the Iowa legislature is scheduled to convene. A major priority of the legislative session will be taking measures to aid in the COVID-19 economic recovery. The pandemic continues to cause uncertainty as the virus is once again intensifying throughout the Midwest. To help Iowa’s economy recover and to create economic growth, policymakers should center their efforts on reducing the regulatory burden on businesses and keeping tax rates low. In 2023, Iowa’s individual income tax rate is scheduled to be lowered, but only if revenue triggers are met. It is imperative that policymakers keep spending levels low to ensure these reductions are implemented. Both regulatory reform and lowering tax rates will not only help the economy recover but will also strengthen Iowa’s economy and make the state more competitive.

Iowa’s tax and regulatory climate should be a concern for all Iowans. High tax rates not only deter economic growth but leaves both individuals and businesses with less of their hard-earned money. It is often forgotten that many businesses are taxed through Iowa’s individual income tax. These high rates also disincentivizes both productivity and investment.

In recent years Iowa has been making progress on improving the state’s overall tax climate. Governor Kim Reynolds and the Iowa legislature have made tax reform a priority. In 2018, the Iowa legislature passed a landmark tax reform law, which reduced both individual and corporate income tax rates and broadened the sales tax base. In 2019, the legislature passed a property tax transparency and accountability law to address runaway property taxes. Governor Reynolds, during the 2020 session, made tax reform a priority when she introduced her Invest in Iowa Act.  One key component called for a 10 percent income tax reduction in 2021 and lowering the top individual income tax rate to 5.5 percent in 2023. The income tax reductions would have been financed in part with a one cent increase in the sales tax.

Governor Reynolds has hinted that the Invest in Iowa Act may be part of her 2021 legislative agenda. Senator Jack Whitver, who serves as the Majority Leader of the Senate, along with other Republican legislative leaders have also stated that tax reform will be a priority. “We’ve taken several steps forward with our tax climate in the state of Iowa, but it’s not as good as it needs to be and so we’re going to always continue to work on that,” stated Sen. Whitver.

As a result of recent tax reform measures passed by the legislature, Iowa’s tax climate has been improving, but more work is needed. The 2021 Tax Foundation State Business Tax Climate Index ranks Iowa 40 out of 50. 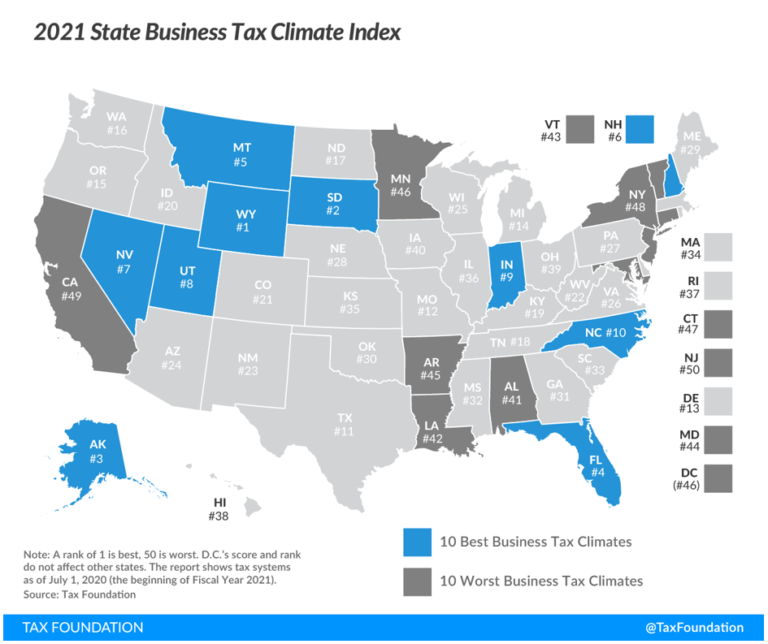 The Tax Foundation highlighted some of Iowa’s recent tax reforms that have improved our tax climate and is catching the attention of our neighboring states: 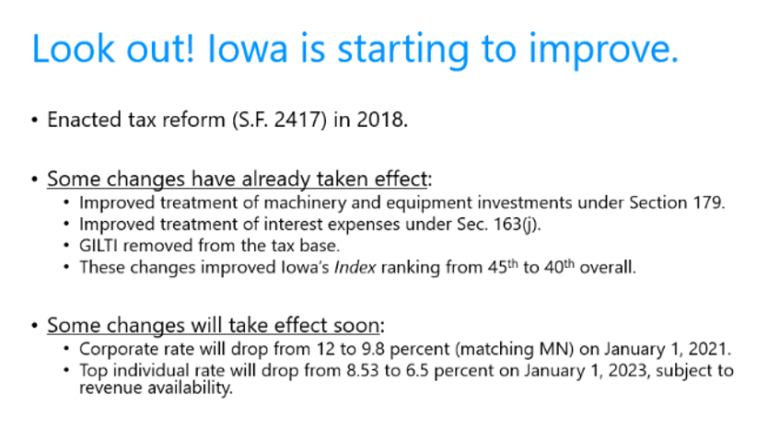 In 2023, as part of the 2018 tax reform law, Iowa’s income tax is scheduled to be reduced to 6.5 percent. The caveat is, for the rate reduction to occur, two stringent revenue triggers must be met. The first, state revenue must surpass $8.3 billion and the second, requires revenue to grow at least four percent during that fiscal year.  The use of revenue triggers in state tax policy is a good idea, but creating a high threshold can unnecessarily delay tax rate reductions. The four percent growth trigger also places spending interests above those of the taxpayer. 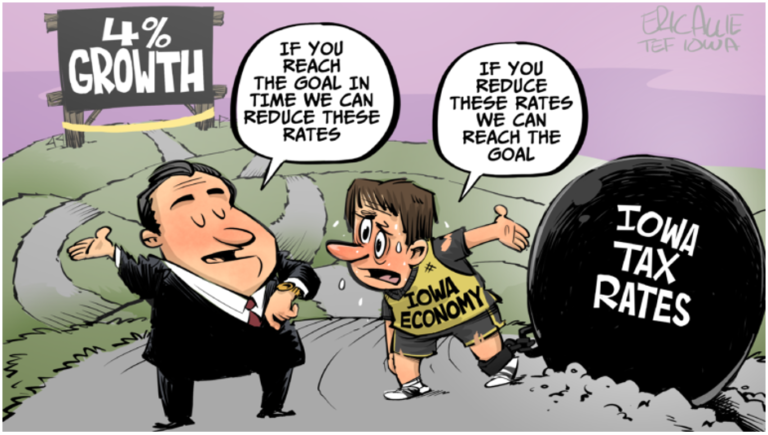 Analysis by the Legislative Services Agency (LSA), based upon the recent Revenue Estimating Conference (REC) project, reported “that while the 4.0 percent revenue growth percentage trigger will be met for FY 2022, the dollar threshold trigger is expected to fall $83.8 million short of the level required to activate the contingent income tax system for tax year 2023.”

The economic impact of COVID-19 may delay the 2023 rate reduction but repealing the triggers would reduce a major roadblock to income tax relief. If the triggers are not repealed, then legislators must lower spending to ensure that the trigger requirements are met.

Reducing the regulatory burden on Iowa’s economy will also spur economic growth. James Broughel, a Senior Fellow at the Mercatus Center at George Mason University, argues that regulatory red tape is a “drag on economic growth.” Regulations are not just rules printed in state code. They impact the cost of doing business and they can lower the standard of living for Iowans.  “Regulations influence behavior. When we want less of something, we regulate it. For the sake of our families, young people, and low-income workers, we must not regulate jobs out of existence,” stated Rea Hederman, Executive Director of the Economic Research Center and Vice President of Policy at the Buckeye Institute.

Broughel has measured the regulatory burdens in the states and, as of this year, Iowa has 161,000 regulatory restrictions in its administrative rules, as measured by instances of terms like “shall,” “must” and “required.” “To put that in context, the average U.S. state has about 135,000 of these terms, and the least regulated state—Idaho—has just 39,000,” wrote Broughel. 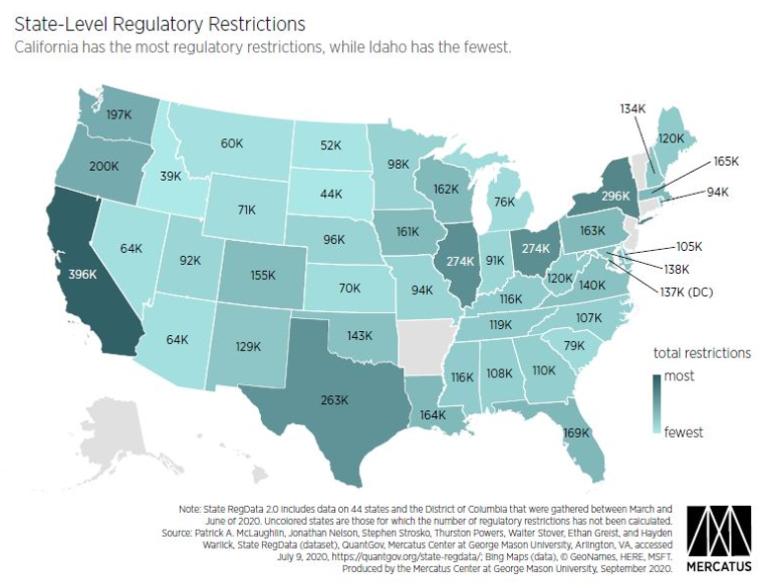 Broughel recommends strengthening Iowa’s regulation review process. “Rules in Iowa are supposed to be reviewed every five years, but that process lacks teeth. Agencies just have to issue a report summarizing the results of their reviews—there’s no requirement for rules to go away if they’ve outlived their usefulness,” argues Broughel.

Regulatory reforms in North Carolina and Idaho can serves as examples for Iowa’s regulatory reform. “North Carolina has a 10-year review process, but the state also sets a schedule of expiration dates for rules so that they cease to exist unless reauthorized. In Idaho, rules have to be repealed on a five-year staggered basis. If the regulating agency wants to keep its rule, it has to refile a new one,” stated Broughel.

Iowa could also duplicate a regulatory reform measure that President Donald Trump instituted, which requires agencies to eliminate two regulations for every new one. Oklahoma is one state that is following this approach. Ohio has also passed a law, for every new regulation, two must be eliminated.

Reviews to Iowa’s regulations should also be applied to occupational licensing requirements. During the last legislative session the legislature passed an occupational licensing reform measure which granted universal recognition of out-of-state licenses. However, this law could be strengthened. By implementing a sunset provision, it would require a review of existing licensing regulations on a rotating basis, while a sunset requirement would force the legislature to review the impact of a proposed regulation before it is enacted.

Tax and regulatory reform are two economic policies that will help spur Iowa’s economic recovery and continue to make the state more competitive. Iowa taxpayers will also benefit not only by keeping more of their hard-earned income, but it will create more opportunities for all Iowans.

Governor Reynolds and the Republican legislature have followed a policy of fiscal conservatism. During the 2021 legislative session, it will be imperative for the legislature to continue to keep spending low and to rely on conservative revenue estimates. Lower spending, combined with tax and regulatory reform will not only strengthen Iowa’s fiscal climate, but also the economy.