Iowa’s unemployment rate declined to 3 percent in April, which is down from 3.3 percent in March. “The number of unemployed Iowans decreased to 50,900 in April from 55,600 in March. The total number of working Iowans increased to 1,646,800 in April — a figure that is 10,000 higher than March and 45,100 higher than one year ago,” reported Iowa Workforce Development. Unemployment insurance claims are at their lowest level since 1973.

“Thousands of Iowans returned to the workforce in April and found promising new careers in manufacturing, construction, and other industries,” stated Director of Iowa Workforce Development Beth Townsend. Iowa’s “economy continues to grow, our labor force continues to expand, and unemployed Iowans are finding amazing new career opportunities faster than ever thanks to our pivot to focus on reemployment.”

Nevertheless, national economic problems, from inflation to the supply chain, are creating challenges for Iowa’s economy. According to Ernie Goss, the Jack A. MacAllister Chair in Regional Economics at Creighton University’s Heider College of Business, “Much like the nation, the growth in the Rural Mainstreet economy is slowing. Supply chain disruptions from transportation bottlenecks and labor shortages continue to constrain growth. Farmers and bankers are bracing for escalating interest rates — both long-term and short-term.”

A decline in the value of the dollar has helped Iowa’s exports, especially in relation to Mexico. “For 2021, the Iowa export of farm commodities to Mexico represented 61.5% of all farm commodity exports. The depreciation of the dollar to the peso was very supportive of these exports in 2021,” Goss explained.

Manufacturing and construction led the way in job growth, with a one-month gain of 2,000 jobs between those sectors, while the information, financial, and professional and business service industries contributed an additional 1,300 jobs. Meanwhile, Workforce Development reports that the “Government [sector] advanced slightly in April (+200) and now stands at 4,600 jobs above last year.” Some of this growth reflects specific projects the government has scheduled for this summer, but it does show Iowa’s economy gaining strength.

Dr. Goss also discussed some of the economic drivers affecting Iowa’s unemployment. “The seasonally adjusted reduction in the size of Iowa’s labor force was due to, one, continuing Covid-19 fears of returning to work, two, government financial support for non-work (that is, the gap between returning to work and leisure was reduced), three, the lack of quality, affordable child care, and four, a high share of baby-boomers and others that retired.” 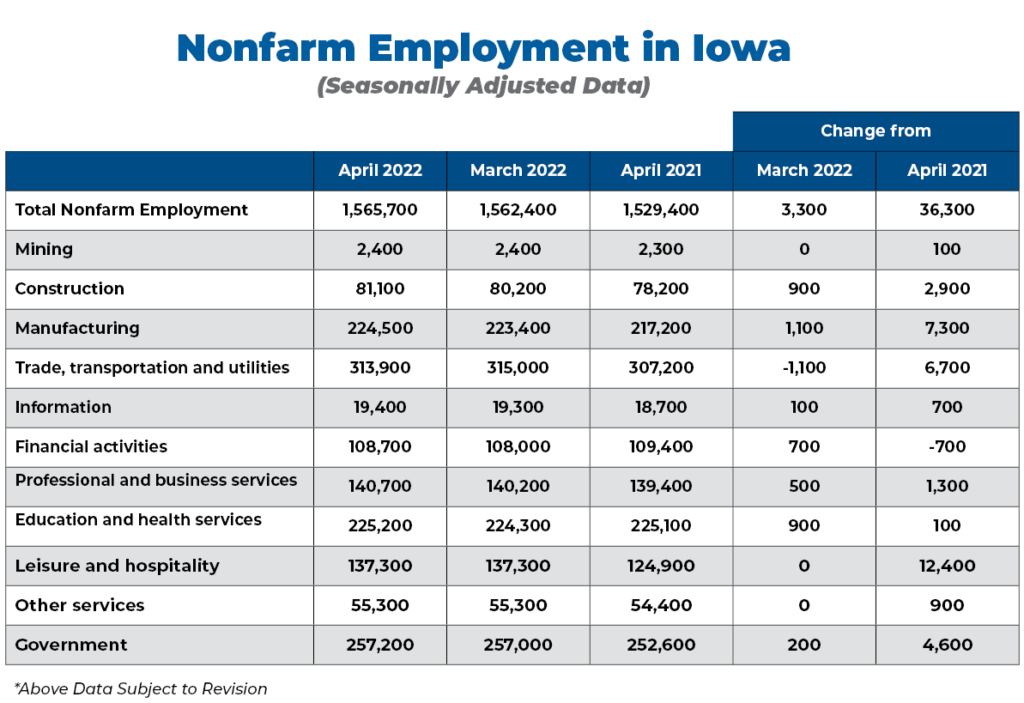 Although Iowa’s unemployment rate is good news, strong economic headwinds are going to make continued progress difficult, even with the sound fiscal policies that Governor Reynolds and the legislature have been enacting.  Iowa has an urgent need for workers to fill numerous positions, which was a challenge even before the pandemic; being a rural state, Iowa’s population grows slowly. As the federal government continues to steer the national economy into stormy waters, mounting inflation represents an economic attack on Iowans, driving up consumer prices, especially on gasoline and food.  Iowa’s emphasis on responsible economic and fiscal policy may become a matter not just of competitive advantage, but of survival.