Iowa’s unemployment rate dropped from 8 percent in June to 6.6 percent in July. A year ago the unemployment rate was just 2.7 percent . The national unemployment rate for July stands at 10.2 percent. Iowa has the 7th lowest unemployment rate in the nation, and regionally only Nebraska (4.8 percent) and South Dakota (6.3 percent) have lower rates. Iowa’s high unemployment, triggered by the COVID-19 pandemic, continues to decline, but the economy is still battling to recover. To make matters worse, a recent windstorm swept across Iowa causing tremendous damage to residential property as well as millions of crop acres. In addition to the storm, there are other agricultural factors contributing to the uncertainty in Iowa’s economy. 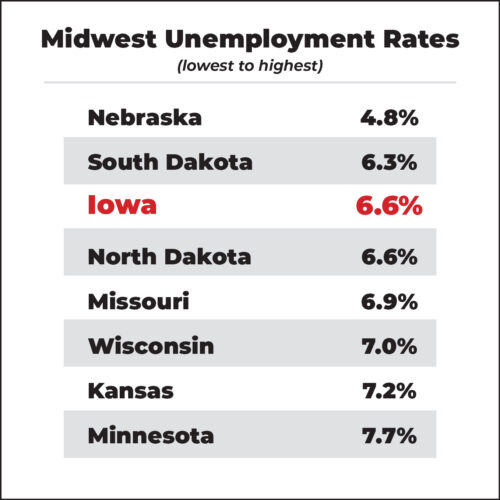 The decline in the unemployment rate is certainly a positive for Iowa’s economy. It is estimated that Iowa has regained close to half of the jobs that were lost due to the pandemic. “July's payrolls grew by 29,300. It is good news to see a decline in the overall unemployment rate. It is much better for our economic recovery if Iowa can move people off of unemployment and back into full time jobs,” said Director Beth Townsend, Iowa Workforce Development. Iowa’s Workforce Development reported, the “total number of working Iowans increased to 1,517,900 in July,  and this figure was 11,400 higher than June and 175,300 lower than one year ago.”

Workforce Development is also reporting over 58,000 job openings posted on their website. The July unemployment report shows the leisure and hospitality industries adding the most jobs with 8,600. These two industries suffered because the pandemic caused closures followed by social distancing policies. “Through July, leisure and hospitality has brought back nearly half of all staff laid off in March and April, although the job gains slowed markedly this month,” reported Workforce Development.

Other areas of job growth include:

Iowa’s economy is improving. However, COVID-19, the devastation caused by the recent storm, and a slowing agricultural economy are all factors that are hindering economic growth. The Rural Mainstreet Index, released by Creighton University, reports, “August’s index represented the sixth straight month with a reading in a recessionary economic zone.”

Ernie Goss, Ph.D., the Jack A. MacAllister chair in regional economics at Creighton and a lead author of the Rural Mainstreet Index, argues that a major reason for slow economic growth is the “weakness in the farm economy.” “Farm commodity prices are down by 10.4 percent over the last 12 months. As a result, and despite the initiation of $32 billion in USDA farm support payments in 2020, only 8 percent of bankers reported their area economy had improved compared to July, while 18.4 percent said economic conditions had worsened,” stated Goss.

COVID-19 continues to cause fear, which is impacting consumer behavior. People are being very cautious when returning to restaurants, theaters, among other public businesses. Social distancing continues to cause economic hardship on businesses who must limit the number of customers which they can serve. With Iowa’s economy heavily dependent upon agriculture, the weakening of this sector will continue to have a lasting effect.

The economic trends confronting Iowa’s economy make it difficult to predict a recovery. As for now, uncertainty remains.