The Tax Foundation has released the 2022 State Business Tax Climate Index today and for the second year in a row, Iowa has moved up two spots. Out of all 50 states, Iowa is now ranked 38 after landing at 42 in 2020’s rankings. As a result of the comprehensive tax reform law in 2018 and other recent reforms, Iowa’s tax code is becoming more competitive. 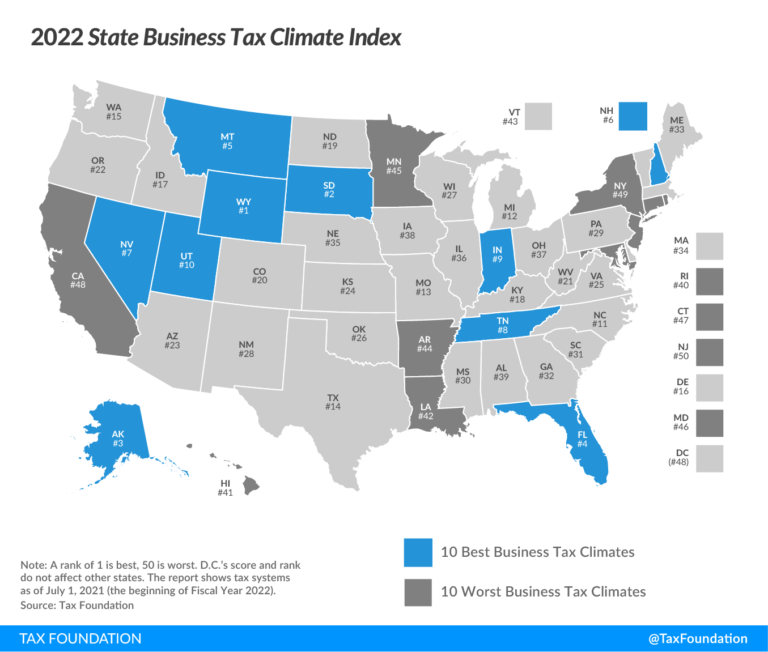 Whether it is trying to attract businesses or people, tax rates matter. “The evidence shows that states with the best tax systems will be the most competitive at attracting new businesses and most effective at generating economic and employment growth,” noted Janelle Cammenga and Jared Walczak, who are the authors of the State Business Tax Climate Index.

Iowa’s tax climate is improving because of a series of pro-growth tax reforms that Governor Kim Reynolds and the legislature have passed since 2018.  One reason in particular for Iowa’s improved ranking in the Tax Foundation report is the recent lowering of the corporate income tax rate. This year Iowa’s corporate tax rate, which was previously the highest in the nation at 12 percent, was reduced to 9.8 percent. Iowa’s corporate tax rate will now have three brackets that top out at 9.8 percent.

While important, tax rates are not the only factor that drive the overall wellbeing of a state. Free-market reforms in other areas will help make a state more competitive, but tax reform provides a quick jump start. “Furthermore, unlike changes to a state’s health-care, transportation, or education systems, which can take decades to implement, changes to the tax code can quickly improve a state’s business climate,” wrote Cammenga and Walczak.

During the 2021 legislative session, the Iowa legislature was one of 15 states that enacted tax reform. Numerous states are working to lower their taxes, and this makes competition fiercer between the states. “It is important to remember that even in our global economy, states’ stiffest competition often comes from other states,” the report’s authors noted.  Even with all of the income tax cuts across the country in 2021, more states are focusing on lowering taxes in 2022.

Although Iowa’s ranking has improved in the Index, it is still clear that tax reform is far from complete. In Table 1, the State Business Tax Climate exhibits where Iowa ranks among the states in several major tax categories.

These rankings demonstrate that Iowa lawmakers cannot be complacent in their efforts to reduce the tax burden on Iowans, particularly through income and property taxes.

Bolstered by a  taxpayer relief fund that is bursting at the seams and a revenue projection for the year that continues to climb, Iowa has a historic opportunity to deliver more pro-growth reductions to the income tax code in 2022.  Additionally, property taxes could be reigned in through a Truth-in-Taxation measure that places strong transparency and accountability responsibilities with local governments.  Improvements on the income and property tax fronts will be key to Iowa continuing its climb up the rankings for 2023.