Why do local governments believe they need so much of your money? In recent years, Iowa property valuations have increased considerably. Large valuation increases usually translate into increased revenue for local governments in the form of property taxes. Given the impact of inflation, we can expect this trend to continue.  It will be interesting to see how Iowans manage to bear a growing property tax burden while paying more for gas, groceries, and everything else.

A great case study to illustrate how property tax bills can grow is the plethora of projects being considered in Indianola right now.  Keep in mind that across the state, taxpayers are subject to property taxation from multiple local entities. These different taxing authorities include cities, counties, school districts, townships, community college districts, hospital districts, and sanitation districts, among many others. In total, Iowa has more than 2,000 taxing authorities, meaning property is taxed by more than one entity.  And the citizens of Indianola may experience what happens when several of those entities have big plans all at once.

Indianola’s city council recently approved a plan to ask citizens to bless two bond issues next March for a new public safety building and library.  While the final price tag of those bonds has yet to be determined, preliminary estimates for the projects totaled $62.2 million.  Earlier this spring, the council couldn’t muster enough support to send the issues to the voters.  Unfortunately, finances were not the reason for the failed vote – it was more about the details of the building projects and the location of the new buildings that had council members concerned. From a taxpayer perspective, dollars should have been a central issue from the start.

While the city has its tax and spending issues to contemplate, the local schools are thinking about their own construction project. The Indianola School District is considering a fall vote on a proposal to renovate or replace the Indianola High School at a price tag between $71 million and $144 million.  On top of those projects, Warren County has said it plans to hold a vote on $15 million in road repairs around the county.

By the way, Warren County is opening a new justice center that was $10 million over budget, coming in roughly 30% more expensive than planned.  Not to worry though, the county can afford it because of the new property tax dollars they’re collecting from citizens and businesses.  As one of their supervisors explained, "When our tax revenues and property valuations are going up every year, it's easy."  Maybe that’s the answer to our opening question; local governments think they need more money because it makes their jobs easier.

Too often in our state, different levels of local government operate in a vacuum and do not consider the aggregate impact their fiscal decisions have on the taxpayer.  Think about your own property tax bill.  One of the likely reasons it has grown so much is because your various local governments simply have an appetite to spend.  Let’s re-visit our case study.  The ten-year trends for the city of Indianola and Warren County show that property tax growth there has more or less doubled the combination of population growth and inflation. 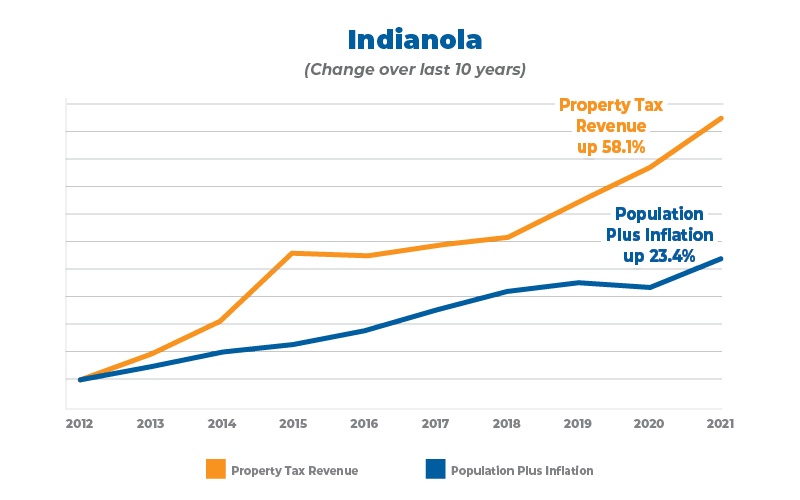 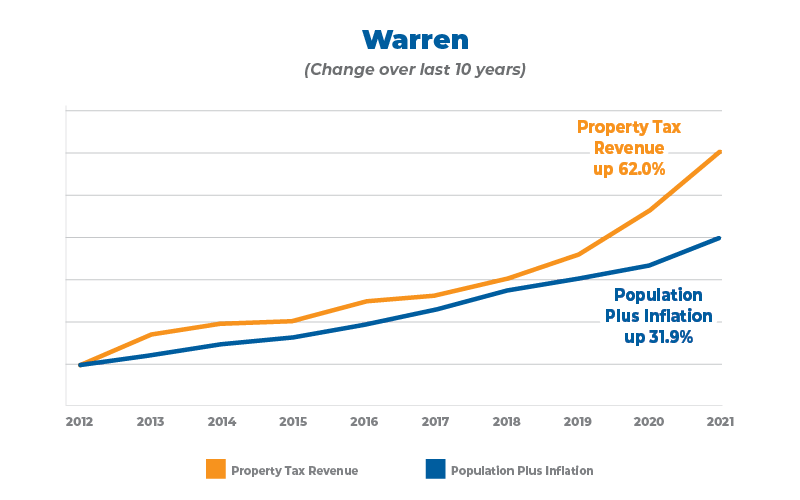 Indianola’s new city manager has apparently already decided that more spending is a forgone conclusion, telling the city council recently, “You can spend the dollars now or you can spend the dollars later. The most important thing is that we spend the dollars wisely.”   Spending wisely is a good policy goal, but it should be very clear that the city is absolutely planning to spend more money. Yes, the city did agree to reduce the tax rate for next year from $13.63178 to $13.54412  per $1,000 of valuation. But does that mean they are collecting less money? With rising valuations and today’s inflation, it’s doubtful. After all, a lower rate applied to a higher valuation can still mean more taxes.

Putting the discussion about increasing valuations aside, just considering rates alone, Indianola residents currently pay a consolidated tax rate of $39.57583 which is higher than 85% of the communities in Iowa.  And compared to the 100 largest cities in our state, the tax bill in Indianola is more expensive than average.

The citizens of Indianola might very well need, or at least want, all of these proposed projects.  There is nothing inherently wrong with a new public safety building, or a new school, or road repairs.  But the primary focus for elected officials should be the impact their decisions have on the taxpayer. Local governments being able to pay for cost overruns because they keep taking more property tax dollars and saying “it’s easy” is outrageous. Families across the state are making difficult decisions every day, like choosing to refill their gas tank or their pantry.  Our local governments should exercise the same discretion with their spending.