The first month of Iowa’s new fiscal year is now behind us. While looking at a single month is just one small slice of the pie, it might be hinting at some economic trends we are seeing nationwide.  Record low unemployment could be resulting in higher than expected income tax payments, while fast growing inflation and a looming recession might be causing people to spend less of their money.

Personal income tax and corporate income tax were both much higher compared to the July 2021 figures, with increases of 7.1% and 415.5% respectively. However, sales tax, which was the one tax the REC has projected to increase this year, was much lower compared to July 2021, finishing the month $156.5 million (-41.1%) less than a year ago.

Before drawing too many conclusions, though, it must be noted that July 31 fell on a Sunday this year.  Any payments received over the final weekend will be pushed into August.  It is possible that the difference in sales tax receipts is simply a matter of the calendar, but inflation likely plays a role, too.

The Consumer Price Index (CPI) shows that the annual rate of inflation increased to 9.1% while energy prices have increased 41.6% and food costs increased 10% from this time last year. While some would say if the price of items increases, then sales taxes should increase proportionally, that is not always the case. When prices increase to a certain point people will change their shopping habits and purchase less.  And in Iowa specifically, there is not a sales tax on gasoline or groceries, so the items people are forced to spend more on do not contribute to the state’s general fund. 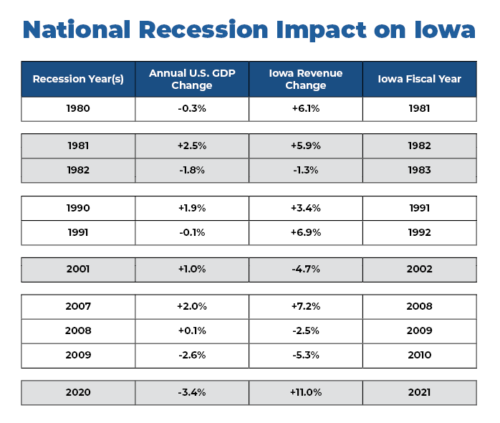 For the full fiscal year that has just begun, the Revenue Estimating Conference (REC) has forecasted a decrease of $475 million compared to FY2022, but that is because of an adjustment for multiple legislative changes, one of which is the historic tax reform bill that passed in March. There is no cause for concern if revenues are lower than in previous years, that just means taxpayers are keeping more of their money.  If a recession does end up gripping the nation, that also may not be cause for immediate concern here.

ITR Foundation recently published a piece that examined Iowa’s revenue changes during past recessions. While history did not paint a clear picture of what to expect, it did show that Iowa is not in a dangerous position. Of the six most recent recessions (dating back to the early 1980’s farm crisis), Iowa only had four years of declining revenue and six years when the state’s revenue grew.

At the end of the day, we are entering a new fiscal year with lots of uncertainty about the national economy and Iowa is poised to weather whatever events may happen.  Our state should be buoyed by a sound and strong fiscal position and a diverse economy.