Learning from the Champions of Fiscal Conservatism

Learning from the Champions of Fiscal Conservatism

Government spending is at the heart of sound public policy. But out-of-control spending for decades has created substantial economic destruction and ongoing threats that must be remedied before things get worse. Fortunately, we have examples of how fiscal rules can solve this problem. We must put these rules into place before our economy gets any worse.

Excessive federal government spending has created mounting budget deficits that have driven the national debt to $30 trillion. This debt has given the Federal Reserve ammunition to use to recklessly print money, resulting in the highest inflation in 40 years. And inflation destroys our purchasing power as it is a hidden tax that erodes our livelihood.

Policymakers should follow the examples of a century ago in Presidents Warren G. Harding (image: left) and Calvin Coolidge (right), who demonstrated that controlling spending and cutting the debt is possible.

President Harding assumed office in 1921 when the nation was suffering an overlooked severe economic depression. Hampering growth were high income tax rates and a large national debt after WWI. Congress passed the Budget and Accounting Act of 1921 to reform the budget process, which also created the Bureau of the Budget (BOB) at the U.S. Treasury Department (which was changed in 1970 to the Office of Management and Budget in the Executive Office of the President). President Harding’s chief economic policy was to rein in spending, reduce tax rates, and pay down debt. Harding, and later Coolidge, understood that any meaningful cuts in taxes and debt couldn’t happen without reducing spending.

Charles G. Dawes was selected by Harding to serve as the first BOB Director. Dawes shared the Harding and Coolidge view of “economy in government.” In fulfilling Harding’s goal of reducing expenditures, Dawes understood the difficulty in cutting government spending as he described the task as similar to “having a toothpick with which to tunnel Pike’s Peak.”

To meet the objectives of spending relief, the Harding administration held a series of meetings under the Business Organization of the Government (BOG) to make its objectives known.

“The present administration is committed to a period of economy in government…There is not a menace in the world today like that of growing public indebtedness and mounting public expenditures…We want to reverse things,” explained Harding.

Not only was Harding successful in this first endeavor to reduce government expenditures, his efforts resulted in “over $1.5 billion less than actual expenditures for the year 1921.”  Dawes stated: “One cannot successfully preach economy without practicing it. Of the appropriation of $225,000, we spent only $120,313.54 in the year’s work. We took our own medicine.”

Overall Harding achieved a significant reduction in spending. “Federal spending was cut from $6.3 billion in 1920 to $5 billion in 1921 and $3.2 billion in 1922,” noted Jim Powell, a Senior Fellow at CATO Institute. Harding and the Republican Party viewed a balanced budget as not only good for the economy, but also as a moral virtue. 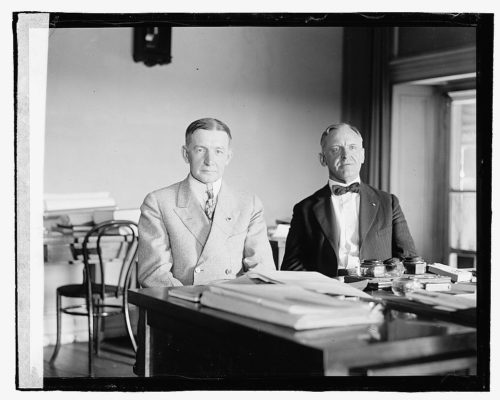 Dawes’s successor was Herbert M. Lord, and just as with the Harding Administration, the BOG meetings were still held on a regular basis. President Coolidge and Director Lord met regularly to ensure their goal of cutting spending was achieved.

Coolidge emphasized the need to continue reducing expenditures and tax rates. He regarded “a good budget as among the most noblest monuments of virtue.” Coolidge noted that a purpose of government was “securing greater efficiency in government by the application of the principles of the constructive economy, in order that there may be a reduction of the burden of taxation now borne by the American people. The object sought is not merely a cutting down of public expenditures. That is only the means. Tax reduction is the end.”

“Government extravagance is not only contrary to the whole teaching of our Constitution, but violates the fundamental conceptions and the very genius of American institutions,” stated Coolidge.

When Coolidge assumed office after the death of Harding in August 1923, the federal budget was $3.14 billion and by 1928 when he left, the budget was $2.96 billion.

Altogether, spending and taxes were cut in about half during the 1920s, leading to budget surpluses throughout the decade that helped cut the national debt.

The decade had started in depression and by 1923 the national economy was booming with low unemployment. If this conservative budgeting approach—which was tied with sound monetary policy for most of the period—had been continued, the Great Depression may not have happened.

Officials at every level of government today should learn from this extraordinary lesson that fiscal restraint supports more economic activity as more money stays in the productive private sector.

With spending out of control at the federal level, and in many states and local governments, the time is now for spending restraint and strong fiscal rules to set the stage for more economic prosperity today and for generations to come.

John Hendrickson is the Policy Director at Iowans for Tax Relief Foundation. Vance Ginn, Ph.D., is chief economist at the Texas Public Policy Foundation, and is the former associate director for economic policy at the White House’s Office of Management and Budget, 2019-20.