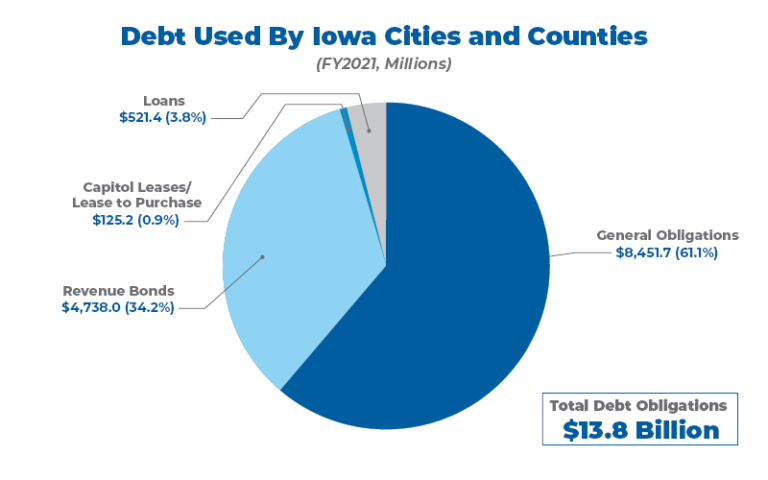 Local governments use debt for multiple reasons, but capital projects and equipment purchases are the most common, including building new facilities or renovating existing buildings, jails, libraries, water treatment plants, road repairs and construction, sidewalks, and equipping emergency management services. Most forms of debt are subject to voter referenda and must garner 60% of public approval to be issued. As of 2021, Iowa’s local governments were carrying a total of $13.8 billion in outstanding debt, of which cities held $7.1 billion, schools $4.9 billion, and counties $1.1 billion.

Iowa’s Constitution limits the debt of all political subdivisions to 5% of the value of the taxable property within them. However, this limit applies only to debt payable from property taxes. If the debt is payable from a city utility (such as water or sewer) or from enterprise revenue (such as landfills or garbage facilities), there is no legal limit.

Local governments are allowed to issue forms of debt, such as revenue bonds and lease-purchase agreements, that are often not subject to the constitutional debt limit. In addition, certain projects and allowances permit cities and counties to issue debt without voter approval. Because this debt is largely paid using property taxes, local governments’ ability to avoid the debt limit or public approval drives up property taxes.

Thus, the debt-service amount paid by cities across the state amounts to $669 million, or 7.78% of all budgeted expenses. (Note that counties have no limit on the rate of debt service within their property tax levies.) While debt is sometimes necessary, lowering debt service provides direct relief to property taxpayers.

Dating back to first constitution adopted by the State of Iowa in 1857, there has been a constitutional debt limit of 5 percent for all local governments. Over time, new forms of debt have been created and legal loopholes have allowed local governments to bypass this 5 percent limit. While some debt is paid with sources of revenue other than property taxes, taxpayers have the ultimate responsibility to pay it if these other revenue sources are insufficient. To maintain the intent our state’s founders had with regards to debt, and to ensure property taxpayers are not unfairly exposed to debt liabilities, the 5 percent constitutional debt limit should be applied to all forms of debt and at all levels of local government.

Local taxing jurisdictions should also not be allowed to incur large amounts of debt without a vote of the people. While borrowing small sums may be necessary for emergencies or other unique situations, local boards or city councils incurring debt without taxpayer votes should be infrequent. 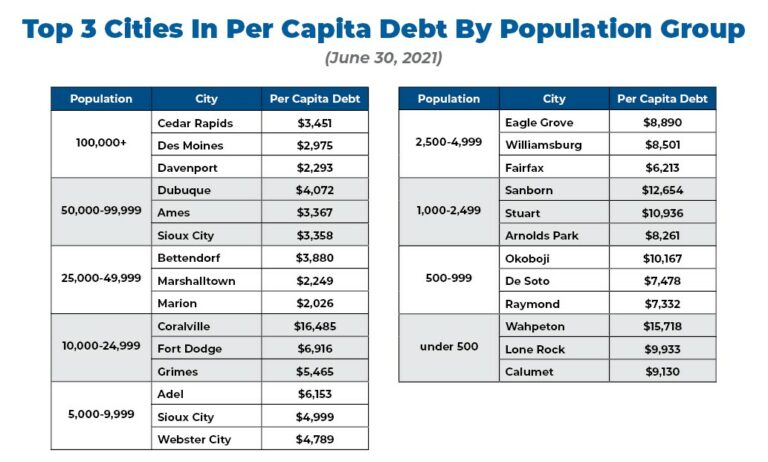 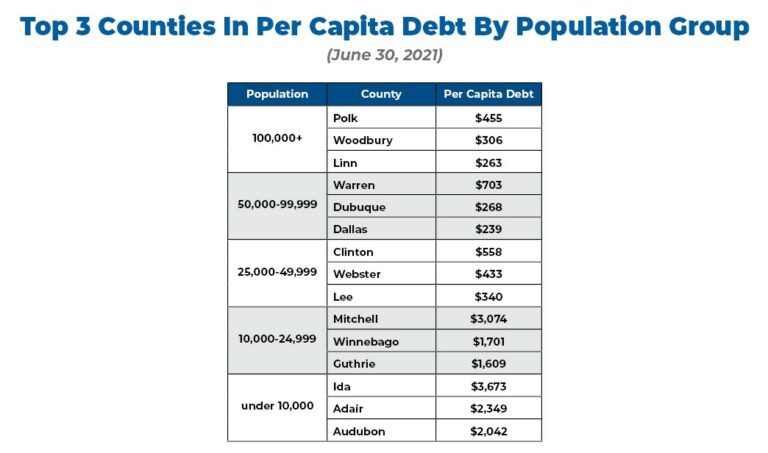