Financial questions that directly affect property taxes and determine some of the most-important decisions affecting local property taxpayers should be held during general November elections when voter turnout is highest.

The Iowa Constitution mandates that the general election be held on the first Tuesday after the first Monday in November of each even-numbered year. This includes county officers, such as auditor, sheriff, treasurer, recorder, county attorney, and supervisors, as well as nonpartisan offices, including public hospital trustees, soil and water conservation commissioners, county agricultural extension councils, and township officers. City and school elections are held on the same day in November, except in odd-numbered years.

Approximately 93% of eligible Iowans are registered to vote, and for nearly 30 years, Iowa has been in the top 10 nationwide for voter registration and participation. When lawmakers noticed that school elections were not producing the voter turnout other elections received (averaging 6.7%), the legislature passed HF566 in 2017, moving school elections from September to November. School election voter turnout increased 150%.

Many special elections include financial questions that directly affect property taxes and determine some of the most-important decisions affecting local property taxpayers, yet the voter turnout for these questions is a fraction of the turnout achieved during general November elections. A small sampling of special elections across multiple counties in Iowa found the average voter turnout was only 18%, whereas the average November turnout since 2010 has been 65%. 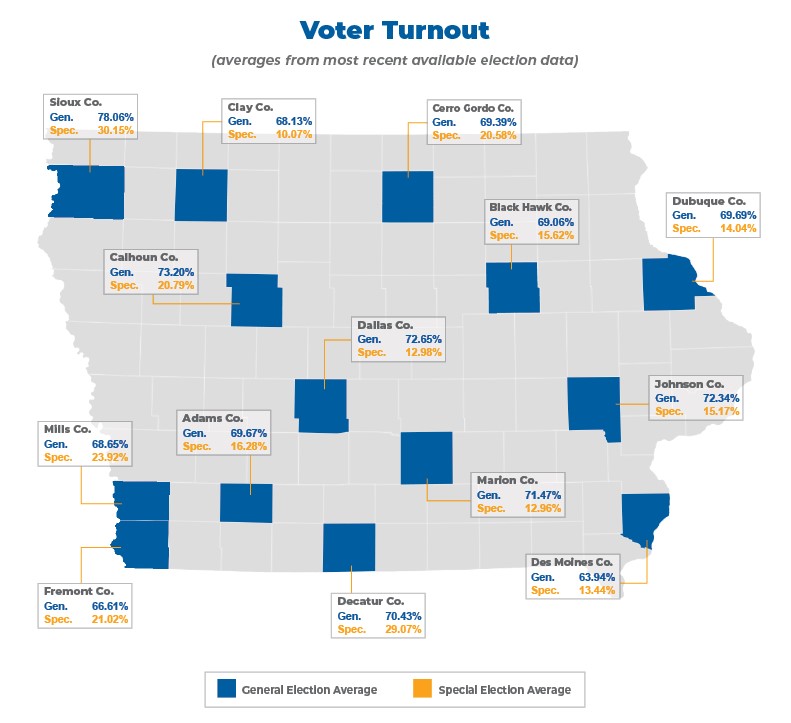 All bonded indebtedness, voted levies, and other revenue or spending questions that directly affect property taxes should be placed on November election ballots for the greatest possible participation of the electorate. Iowa code already recognizes the gravity of bond issue decisions, requiring a 60 percent threshold for passage rather than a simple majority. Exceptions may be made for financial issues that arise in direct response to natural disasters or other public emergencies.