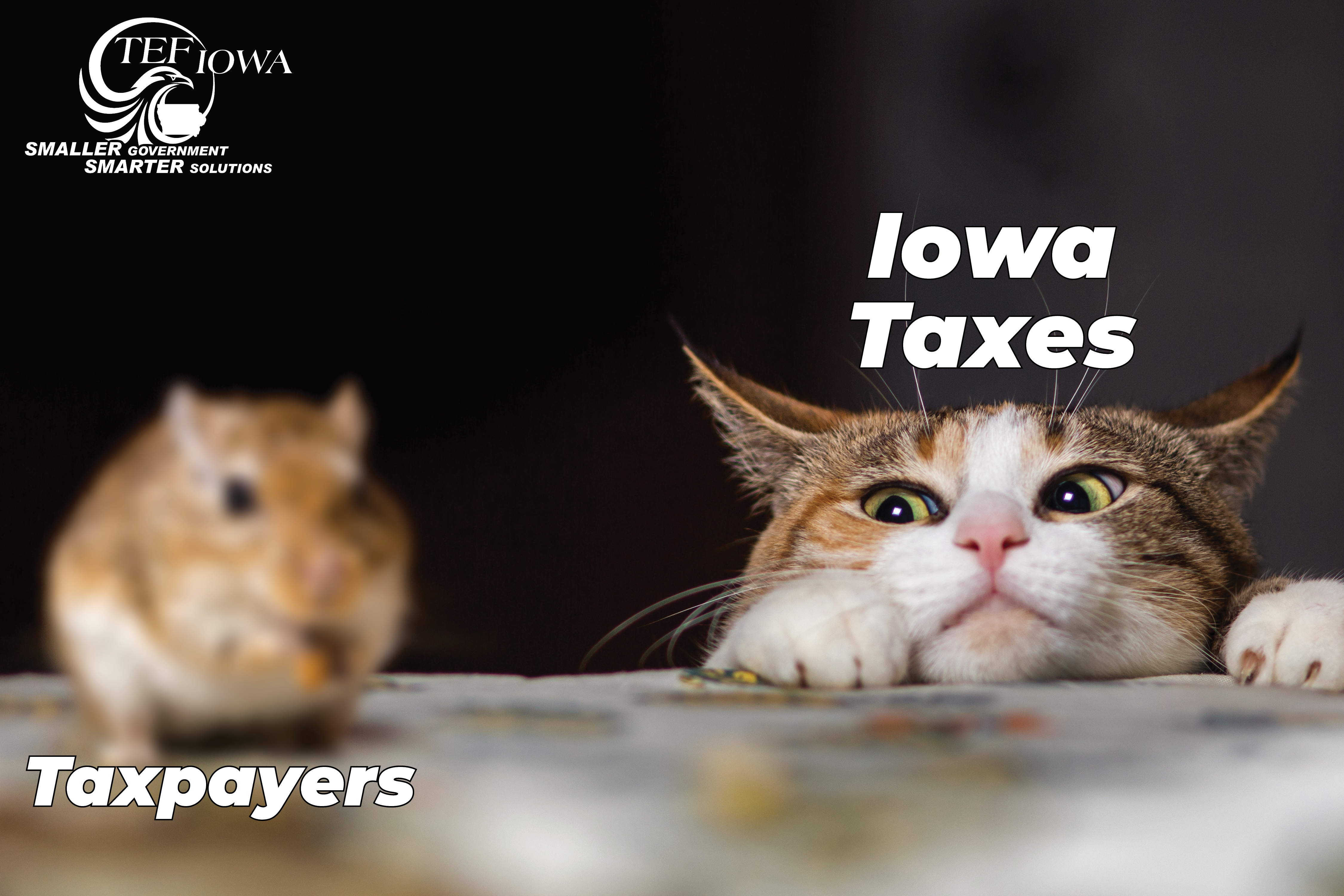 A businessman in Sioux City recently stated it very plainly to us:  “We have stores in seven states.  Iowa is more expensive for property taxes than any other.”

Iowans are, for the most part, hardworking, friendly, and willing to help a stranger in need. Many call this “Iowa nice.”  However, our state’s tax code has been ranked as one of the “least friendly taxed states” in Kiplinger’s State-By-State Guide to Taxes.  A businessman in Sioux City recently stated it very plainly to us:  “We have stores in seven states.  Iowa is more expensive for property taxes than any other.”

Most of Iowa’s neighbors aren’t too friendly either. Illinois, Iowa, Nebraska, and Wisconsin are all in the top ten. Illinois is the nation’s worst with Iowa not too far behind as the ninth-worst taxed state because of high tax rates. As Kiplinger explains:

Which do you think is higher in Iowa: the corn or taxes? It might be taxes, thanks to above average income and property taxes in the state. One reason why income taxes are on the high end in the state is because over 200 school districts and Appanoose County add their own income taxes on top of the state-level tax. The average property tax rate in the Hawkeye State is the 12th-highest in the nation. For a $400,000 home in the state, the owners can expect to pay about $6,711 per year in property taxes. That certainly doesn’t help homeowners in Iowa.

Kiplinger’s also ranks the Hawkeye State as not a “tax-friendly” state for retirees and is one of the few states that still have an obsolete inheritance tax. It is not just Kiplinger’s that recognizes Iowa’s high tax status. The Tax Foundation’s 2019 State Business Tax Climate Index ranks Iowa in the top 10 worst states in terms of business tax climate; Iowa ranks 45 out of 50 in their State Business Tax Climate.

Iowa’s poor standing in Kiplinger’s and the Tax Foundation studies should be a concern.

Iowa’s sales tax rate that is effectively 7 percent, which includes the 1 percent local sales tax, is also high. This is in addition to the historic growth in Iowa’s property taxes. Last year the legislature began work on property tax relief by passing a property tax accountability and transparency measure.

Kiplinger’s state tax ranking serves as another reminder that Iowa needs to lower tax rates. Iowa is in competition with 49 other states for jobs and people. As other states begin to lower tax rates it makes Iowa less competitive. In addition, Iowa should seriously consider the policy mistakes of states such as Illinois, Connecticut, New Jersey, and California, among others that have tried to tax and spend their way to prosperity.

High tax rates not only punish economic growth but for every dollar state and local governments take away in taxes it is less economic freedom for individuals and businesses. For several years the bipartisan consensus has been that Iowa is need of people, but you cannot expect to keep people or attract new people with excessive taxation. The principle holds true, the more you tax something, the less you will get.