Property tax rates are important but advocates often forget that government spending causes higher tax bills. Local governments may even claim they have reduced rates, leaving taxpayers to wonder why their tax bills are bigger. Tax rates only tell one side of the story and can often be misleading.

Homeowners may reasonably assume that assessments are the cause of higher tax bills, which can make them angry with county assessors. While revaluation of property can lead to higher tax bills, the assessor does not deserve the blame. Local governments can use the cover of higher assessments or assessment windfalls to collect more revenue because increasing property values naturally lower the rate necessary to collect the same amount of money.

If assessments were to increase by 20 percent, local government officials may be tempted to increase budgets by more than they otherwise would. Only when valuations go down do they remind taxpayers of the link between valuations and rates. Confusion around this point can create the sense of an “honesty gap” — that is, a growing sense that local governments are not being straight with taxpayers.

How can policymakers restore honesty to property taxes? The solution is to focus on revenue. Utah and Kansas provide the best examples. Both have truth-in-taxation laws, which contain provisions that local governments can only receive as much revenue as during the previous year. For example, if a city receives $1 million in FY22, it can collect only $1 million in FY23. When valuations rise, rates ratchet down to keep the taxing authority’s revenue the same, as described in the Kansas law:

The major difference between the laws of Utah and Kansas is that Utah allows new growth to be factored into budgets, while Kansas does not. Neither, however, allows an automatic adjustment for inflation. 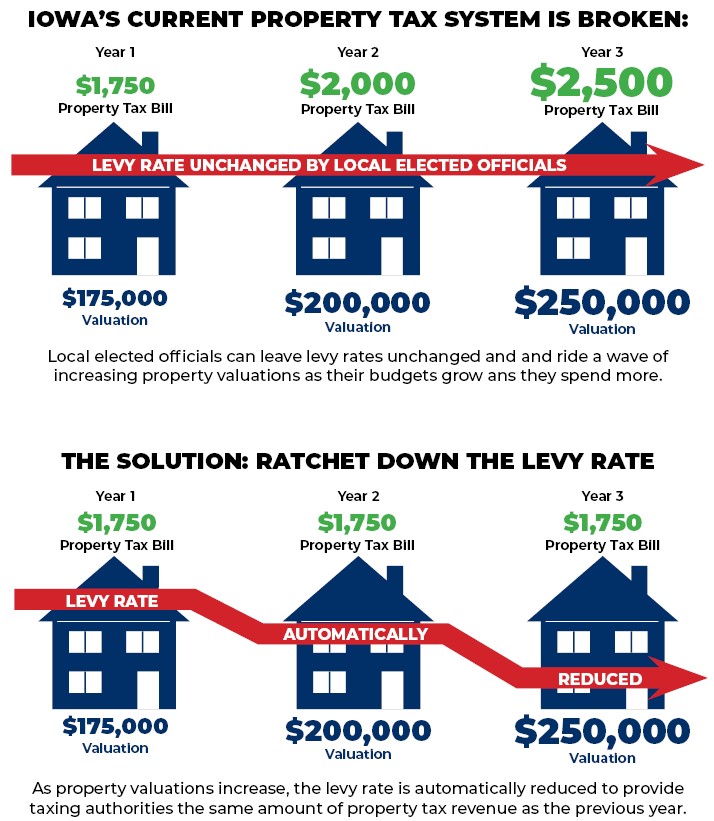