Even with the extensive reforms as of late and the elimination of the county health levy, property taxes still remain a top concern of taxpayers with much work left to be done.

While the 2013 property tax reform was extensive, it failed to address local government spending or property taxes associated with public education, the largest component of property tax bills. Furthermore, local governments engaged in “revisionist history” regarding the backfill, which was never intended to be permanent, arguing that it was an obligation of the state that could not repealed or phased out. The legislature in 2021 enacted a phase-out, but analysis demonstrated that many cities and counties did not even need the money because property tax revenue was escalating.

The second-most-significant property tax reform legislation arrived in 2019. Responding to concerns over rising and complicated property taxes, the legislature passed a property tax accountability and transparency measure. Unlike the 2013 reform, this law attempted to deal with local government spending, creating a 2 percent “soft cap” that would apply to city and county budgets.

The other pillars of the law included measures to increase accountability and transparency by:

While the property tax accountability and transparency law was well intentioned, it failed to provide property tax relief. The 2 percent “soft cap” only takes a two-thirds majority vote of a city council or county supervisor board to override. In addition, the failure to include school districts made the reform ineffective. In terms of transparency, it failed to simplify the complexity of the property tax system, and the budget notices are too complex for most taxpayers to understand.

Finally, the law failed to address local governments’ ability to take advantage of assessment windfalls. Too often taxpayers are told that the rates are going down, only to find that they are paying more in property taxes. This creates an “honesty gap” between local governments and the taxpayer.

The most recent reform of property taxes occurred in 2021. As part of a larger tax reform measure, the legislature not only phased out the backfill, but also eliminated the county mental health property tax levy. Iowa was the only state funding mental health through property taxes. Although some proponents assumed taxpayers would see relief with the elimination of this levy, 49 out of the 99 counties failed to pass along the savings to taxpayers.

When considering future property tax reforms, policymakers must address the total spending of local governments and increase transparency. Any reform that fails to address both problems will be a lost opportunity. The chart below gives a snapshot of the last half-century of local taxing entities’ property tax collections in Iowa. In total, the amount of property tax dollars collected from citizens has increased 523%, while inflation has only increased 416% over the same period, meaning total collections are $1.1 billion more today than they would have been if property taxes had only increased in line with inflation. 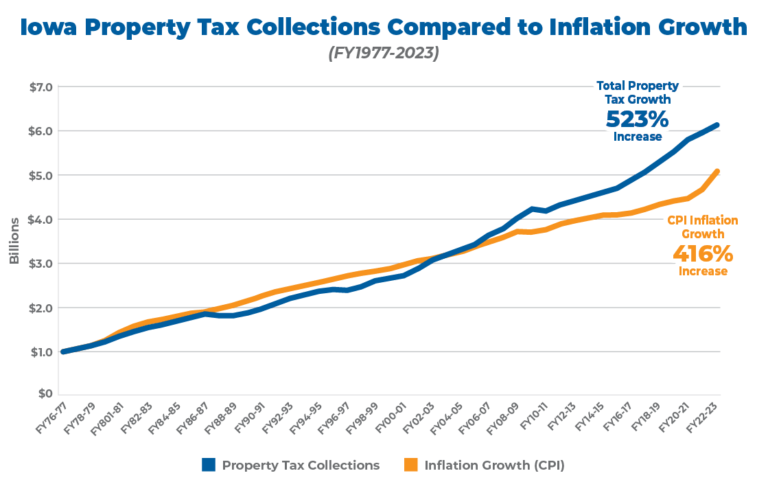