“Are the Republicans Switching Places with the Democrats on Trade,” asked Simon Lester, who is the Associate Director of Cato Institute’s Herbert A. Stiefel Center for Trade Policy Studies. This question is in direct response to former President Donald Trump, who made trade and the loss of manufacturing jobs a centerpiece of his presidential campaign. President Trump openly embraced the use of tariffs and often commented that the United States was not only at the losing end of trade deals, but often being taken advantage of as a result. The President often pointed out how other nations were placing their national interests first, while the United States was more committed to following the ideology of free trade and globalism.

President Trump was responding to trade agreements such as the North American Free Trade Agreement (NAFTA), MFN (Most Favored Nation) for China, among others that resulted in massive trade deficits and the hollowing out of our industrial base. The loss of manufacturing jobs had a detrimental impact on America’s middle-class. “For too long, a small group in our Nation’s Capital has reaped the rewards of Government while the people have borne the cost. Washington flourished, but the people did not share in its wealth. Politicians prospered, but the jobs left, and the factories closed,” stated President Trump.

“That, in turn, devastated towns and contributed to the breakdown of families, an opioid epidemic and despair,” wrote Ambassador Lighthizer. The “blue-collar” workers became the “forgotten men” and often they were told by the political elite that they should either abandon their communities and relocate or learn another skill such as computer programming. This “creative destruction” had consequences. Consumers were able to get cheaper products, but the loss of manufacturing jobs led to lower wages, greater dependence on social welfare programs, and the economic decline of many communities.

“For many decades, we’ve enriched foreign industry at the expense of American industry… One by one, the factories shuttered and left our shores, with not even a thought about the millions and millions of American workers that were left behind. The wealth of our middle class has been ripped from their homes and then redistributed all across the world,” noted President Trump.

Many Republicans, conservatives, and libertarians opposed and were critical of President Trump’s views on trade. In their view the Republican Party stood for the principle of free trade and open markets. In fact, the free market became similar to a “golden calf” idol as many worshiped at the alter of this ideology. Conservatives, such as Patrick J. Buchanan, who were economic nationalists and were critical of free trade were often ignored and their views were considered unorthodox.  In the aftermath of World War II, both the Republican and Democrat parties began to embrace more free trade policies. The Cold War was partly responsible for this as the United States wanted to not only help our allies rebuild after World War II, but also tie other nations closer to us rather than the Soviet Union. Republicans often worked with Democrats in advancing free trade agreements.

President Trump’s victory in the 2016 presidential election not only shocked the nation, but it also challenged the traditional free trade tenet of the Republican Party.  Once in office, President Trump withdrew from the Trans Pacific Partnership (TPP) and his administration placed tariffs on steel and aluminum. America’s steel industry was revived because of the tariffs.  President Trump’s administration renegotiated NAFTA, which resulted in the United States Mexico and Canada agreement (USMCA), and the United States-South Korea trade agreement was also renegotiated.

President Trump also made it a goal to not only improve and enforce trade agreements, but to take on China, which was taking advantage of American markets, undermining the steel industry by flooding the market, and intellectual property theft. Granting China permanent most favored nation status in 2001 was a decision described as most “regrettable” by Ambassador Lighthizer. President Trump stood up to China and challenged them, which resulted in an initial revised trade agreement.

The trade policy of the Trump administration centered on placing workers and the national interest first. “The new policy consisted of aggressive enforcement of prior trade commitments, renegotiating job-destroying trade deals like NAFTA and the United States-Korea Free Trade Agreement, and taking on China’s predatory trade and economic policies,” wrote Ambassador Lighthizer.

The COVID-19 pandemic validated President Trump’s trade policy. As the pandemic swept the nation, Americans learned how heavily dependent the nation is upon foreign countries for medical supplies and medicine. The pandemic is also impacting global supply-chains, which is bringing its own set of challenges to the economy.

The United States has become dangerously dependent on foreign nations, even potentially hostile nations such as China, for essential goods. This even includes materials related to our national security and defense. Currently, a shortage of semiconductors exists. “Why are semiconductors so important? Because computer chips are the “brains” of not just computers, cars, and medical devices, but also the weapons systems that support America’s military. Being so dependent on imported computer chips leaves America’s national security vulnerable to the whims of the global market,” wrote Michael Stumo, CEO of the Coalition for a Prosperous America.

Further, Stumo notes that “China has invested a stunning $120 billion to dominate future semiconductor production – something that could endanger U.S. security when chips are used for sensitive products and installations.” In addition, China is working to expand on producing the metals needed to make semiconductors and related essentials.

“What’s worrying is the degree to which China dominates the global supply of these crucial resources. For example, China controls 70% of the world’s lithium supplies, 80% of rare earth metals, and roughly 70% of the world’s graphite. These materials are irreplaceable for producing everything from electric vehicle batteries to solar panels and semiconductors,” argued Stumo.

President Trump was not only fighting for better trade deals, but he was also pushing to restore the strength of mining. As a result of the decline of the steel industry and excessive environmental permitting processes the mining industry was struggling. President Trump was pushing to restore mining. “Minerals and metals are the building blocks for everything from infrastructure and health care to national defense, clean energy, and electric vehicles. This necessitates a reliable domestic supply chain,” wrote Mark Compton, who is the Executive Director of the American Exploration and Mining Association.

“Yet, in leading Republicans away from globalism to economic nationalism, Trump is not writing a new gospel. He is leading a lost party away from a modernist heresy back to the Old-Time Religion,” wrote columnist Patrick J. Buchanan.

The Republican Party started out as a defender of the protective tariff. Republicans became the champions of protectionism. In fact, the principle of protectionism was a sacred pillar of the Republican Party. Abraham Lincoln, the first Republican to be elected President, championed a protective tariff. A tariff was used both for revenues and to protect both the American worker and the economy. The Democrat Party tended to favor free trade or a low revenue tariff. The free trade tradition was more associated with Democrat Presidents Woodrow Wilson and Franklin D. Roosevelt.

“In essence, from 1860 to 1932 Republicans preached and practiced a nationalistic trade policy that was intended to develop the American market and advance the commercial interests of domestic producers and workers,” wrote Eckes.

The political economy of the Republican Party, as Calvin Coolidge described, was shaped by the Federalists and Whigs:

The party now in power in this country, through its present declaration of principles, through the traditions which inherited from its predecessors, the Federalists, and the Whigs, through their achievements and through its own, is representative of those policies which were adopted under the lead of Alexander Hamilton.

This philosophy also consisted of a commitment to sound money as exemplified by the gold standard, low levels of taxation and regulation, balanced budgets, and a commitment to property rights and economic liberty. These principles along with the protective tariff defined the political economy of the Republican Party. The doctrine of protectionism was not just putting “America first,” but also protecting the entire economy and labor by preserving manufacturing and solid wages for workers.

He [McKinley] at once revised the tariff and strengthened the law establishing the gold standard. Prosperity immediately returned. There was not only a domestic market but immense exports. The foreign trade increased more under the first term of McKinley than it had ever increased in any other four years.

Coolidge also noted that “when all these things were done, the time was ripe for the great economic and industrial development of our country:”

It was this situation, this opportunity, that called forth William McKinley. Taking up again the work of Hamilton and Clay because commercial problems necessarily had been laid aside for the solution of the more fundamental problems of freedom, McKinley re-established their principles, and under his leadership the government readopted their policies.

The result of McKinley’s policies as Coolidge noted was the “application of his principle of a protective tariff, which furnished the initial opportunity for laying down of the greatest industries of America and the development of her entire resources.” Coolidge, just as McKinley argued, that protectionism benefited not just business, but the farmer and laborer as well. “Cheap goods meant cheap men,” stated Coolidge.  The rallying cry of protectionism in the GOP came under the slogan the “Full Dinner Pail,” which was utilized by William McKinley during his presidential campaigns and by later Republican presidential candidates including Calvin Coolidge. The “Full Dinner Pail” represented economic prosperity, high wages, and a sound economy. 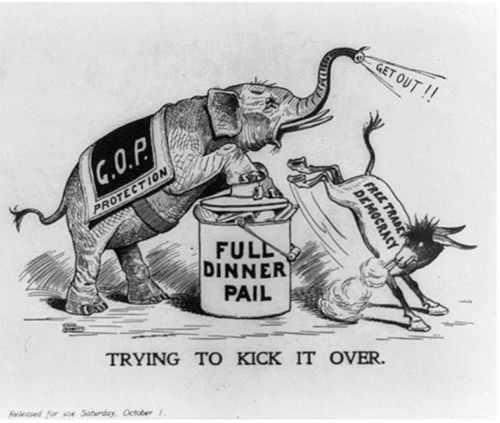 During the 1920s tariff policy followed the McKinley course under President Warren G. Harding, Calvin Coolidge, and Herbert Hoover. The Fordney-McCumber Tariff Act became the major tariff legislation of the Harding and Coolidge administrations. Even during his post-presidency Coolidge continued to defend the policy of protection:

The greatest asset of our whole economic system is its effect upon commerce, agriculture, industry, the wage earner, and the farmer, and practically all our producers and distributors, is our incomparable home market. It has always been a fundamental principle of the Republican Party that this market should be reserved in the first instance for the consumption of our domestic products…Our only defense against the cheap production, low wages and low standard of living which exist abroad, and our only method of maintaining our own standards, is through a protective tariff. We need protection as a national policy, to be applied wherever it is required.

The “Full Dinner Pail” platform of McKinley, Harding, and Coolidge resulted in a period of economic expansion and growth, which benefited not only business, but the middle class. As columnist and former Republican presidential candidate Patrick J. Buchanan wrote:

Protectionism is the structuring of trade policy to protect the national sovereignty, ensure economic self-reliance, and “prosper America first.” It was the policy of the Republican Party from Abraham Lincoln to Calvin Coolidge. America began that era in 1860 with one half of Britain’s production and ended it producing more than all of Europe put together. Is this a record to be ashamed of?

Conservative statesman from Alexander Hamilton to Ronald Reagan sometimes supported protectionism and at other times they leaned toward lowering barriers. But they always understood that trade policy was merely a tool for building a strong and independent country with a prosperous middle class.

It is still too early to see whether President Trump has changed the Republican Party back to its commitment to economic nationalism. Many Republicans and conservatives are still pushing America First policies along with “free and fair trade,” but currently not many are defending the President’s use of tariffs.

President Trump did have a significant impact on trade policy. Currently, President Joe Biden has not eliminated the steel and aluminum tariffs and the Democrats are also pushing “Buy American” initiatives that were also supported by the Trump administration.