Rolling Blackouts May Be Coming to Upper Midwest—Including Iowa

Rolling blackouts may be coming to the Upper Midwest—including Iowa— this summer, according to an analysis from the North American Reliability Council (NERC), a nonprofit international regulatory authority whose mission is to assure the effective and efficient reduction of risks to the reliability and security of the grid.

The report explains that blackouts are a possibility because too many reliable power plants—think nuclear, coal, and natural gas—have been shut down, and electric companies are attempting to replace them with energy sources like wind and solar, which only work if the weather cooperates.

Now, the Midwest will have to hope for unusually windy weather this summer—when electricity generation from wind turbines is generally lowest—to keep the blackouts at bay.

The graph below uses data from the U.S. Energy Information Administration (EIA), and it shows how much electricity Iowa wind turbines generated in each month of 2020 compared to their potential output. This measurement is called a “capacity factor” in industry jargon. Notice wind turbines produced just 21.5 percent of their potential production in July 2020. 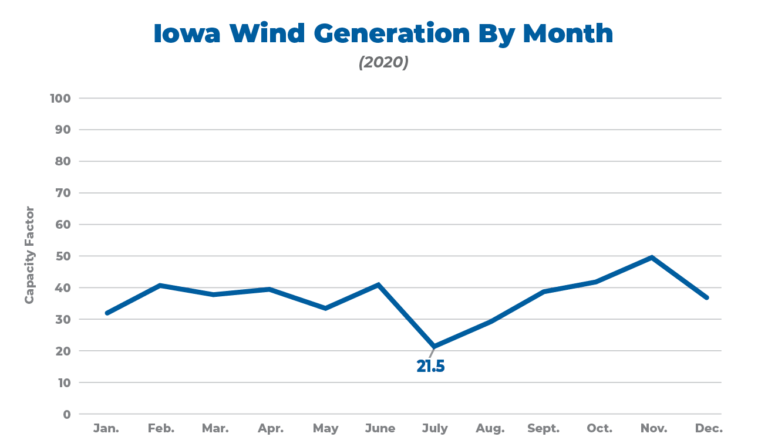 We are in this situation because most people don’t quite understand how the electric grid works beyond the outlet. As a result, the average American might be inclined to support energy policies—like state mandates and federal subsidies for wind and solar power— that sound good on paper but don’t work well in the real world.

For instance, many in the general public seem to believe that replacing coal, natural gas, or nuclear power plants with wind turbines and solar panels will be easy to accomplish and reduce electricity prices.

However, wind and solar can only produce electricity if the wind is blowing or the sun is shining, and electricity is consumed at the exact second that it is generated. This means providing electricity “on-demand” is no guarantee with wind or solar, whose outputs fluctuate considerably from hour to hour.

This problem is compounded by the fact that the grid is not a storage device— a giant bathtub, for example—that saves electricity generated for wind or solar for later use. It helps to think of the grid as a highway, not a parking lot.

Large lithium-ion batteries, which are often promoted as a way to store wind and solar power for later, are incredibly costly and will not be available at scale anytime soon to prevent blackouts. In fact, a recent analysis by Wood Mackenzie, the amount of global battery storage installed by 2030 would only be enough to power about 1.2 percent of Iowa’s energy needs.

Therefore, keeping the lights on when wind and solar production is low requires reliable “backup” power plants, which are usually powered by natural gas. Unfortunately, we don’t have enough of these plants in the Upper Midwest, which is why rolling blackouts are a distinct possibility this summer.

Wind and solar advocates will likely argue that the rolling blackouts are due to extreme weather or climate change, but the reality of the situation is we simply don’t have enough reliable coal, natural gas, or nuclear power plants on the regional grid to meet our peak demand because these same special interest groups have lobbied to close nuclear power plants and argued we must close coal plants to reduce emissions.

Therefore, if blackouts hit the Upper Midwest this summer, they will be the result of a self-fulfilling prophecy.

We should not be surprised that we find ourselves in this situation because the Upper Midwest has essentially enacted the same policies as California, which experienced rolling blackouts in the summer of 2020 while somehow expecting different results.

The graph below uses EIA data to show the amount of power plant capacity, which is measured in a unit called a megawatt, in operation in California. As you can see, the amount of reliable natural gas and nuclear capacity has been declining since 2013, but unreliable solar and wind capacity has grown. When a heatwave drove electricity demand for air conditioning in the summer of 2020, there wasn’t enough electricity on the grid because the sun was setting. The results were blackouts. 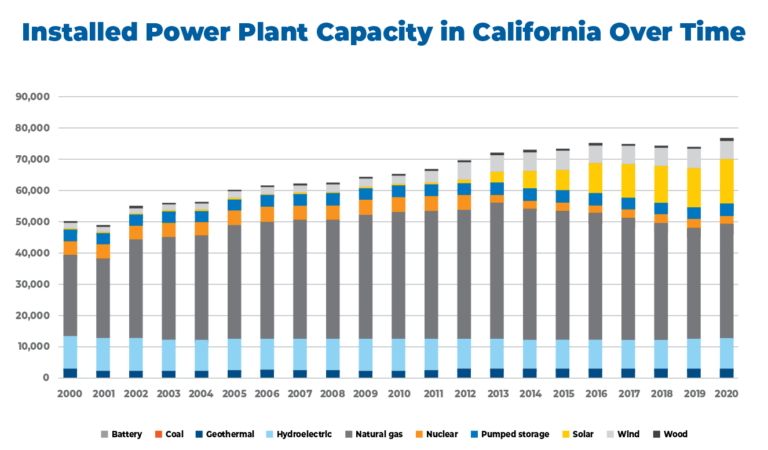 Our country needs to correct our course on energy, which will require policy changes at the state and federal levels. States with renewable energy mandates should repeal them, and federal subsidies for wind and solar must be stopped immediately.

The wind production tax credit, which has been “temporary” since 1992, has undermined the reliability of the electric grid by essentially allowing wind turbines to dump electricity into the market and push reliable power plants off the grid. This is similar to how China has subsidized its iron ore and steel industries to push American producers out of business.

We owe it to ourselves to have reliable, affordable energy because we all suffer when the power goes out. Unfortunately, low-income households, like the one I grew up in on our family farm in Wisconsin, will be hurt the most by the faltering reliability of the electric grid.

If a power outage causes the food in the refrigerator of an affluent family to go bad, it is manageable. If it happens to low-income families, this is a much bigger deal.

Our energy must be reliable first, affordable second, and emissions reductions must come third. Any inversion of these priorities leads to negative consequences in the form of rolling blackouts or rising prices at a time when Americans are struggling with the highest inflation in 40 years. Luckily, nuclear power has an opportunity to check all of these boxes, providing affordable, emissions-free power without the blackouts.

Isaac Orr is a policy fellow specializing in energy and environmental policy at Center of the American Experiment.