Should Iowa Eliminate the Income Tax?

Should Iowa Eliminate the Income Tax?

Iowa relies heavily on income tax to fund state government. It is estimated, in Fiscal Year 2021, 57.3 percent of state revenues will be generated from income (individual and corporate) taxes, while 33.1 percent will originate from sales taxes. 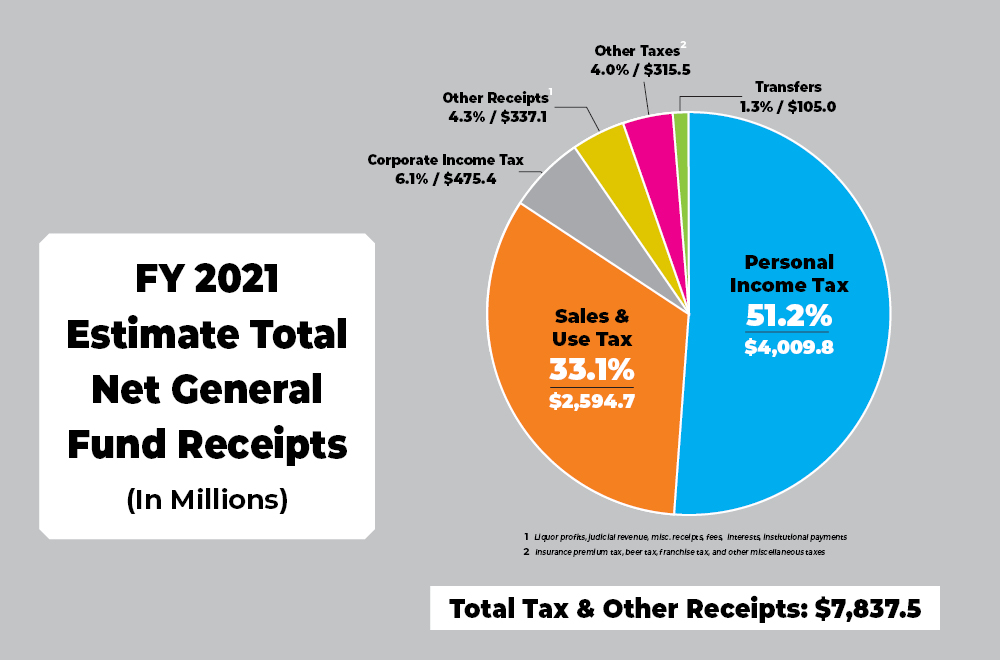 Tax rates matter not only for the revenue they generate to fund the priorities of government, but they also determine the economic competitiveness of a state. The best tax policy is to have rates that are low and broad based, but not all taxes are the same. High rates, regardless of the tax, are harmful for a state’s economy.  “However, not all taxes are created equal, and some harm economic growth more than others,” stated Jonathan Williams, Chief Economist at the American Legislative Exchange Council (ALEC).

Taxes on income, both individual and corporate, are considered the most harmful of taxes. Income taxes discourage growth, investment, and productivity. They are also the most volatile tax during economic downturns.

“Shifting state revenue collection away from reliance on wage income, investment income and business income ensures that when the economy enters a recession – characterized by a drop in aggregate wage income due to exacerbated unemployment, depressed business revenues and poor performance of investments – state tax revenues have a softer decline than they otherwise would,” argues Williams.

Sales taxes are less volatile than income taxes, but the COVID-19 pandemic is creating revenue uncertainty. COVID-19’s impact on state revenue varies state by state depending on the level of shutdown, but the pandemic has impacted consumer behavior. In some states restaurants and other public establishments are closed or operating at half capacity and some consumers are staying home as much as possible to avoid the virus. On the other hand, consumers are still spending online, which will especially help those states, such as Iowa and South Dakota, who collect sales taxes from online purchases.

States without an income tax are attracting much attention because they are generating higher levels of economic growth and population. This presents the question, should Iowa abolish the state income tax and rely solely on the sales tax? 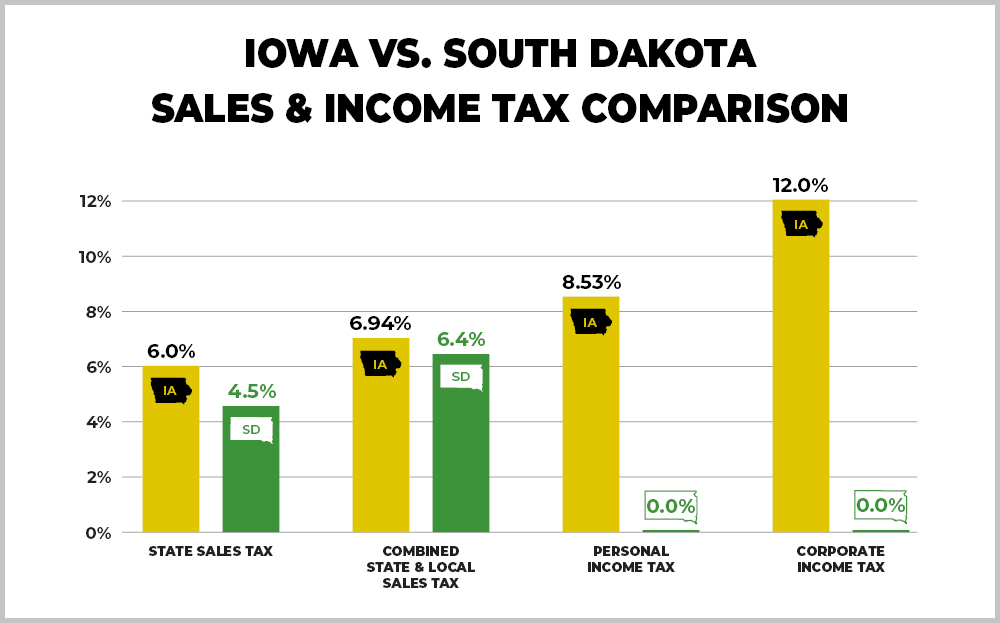 South Dakota does not have an individual or corporate income tax, which means the state relies on the sales tax for a majority of revenue. South Dakota’s sales tax rate is 4.5 percent and the combined state and local sales tax rate is 6.4 percent. “Sales taxes account for 83 percent of state‐​level tax revenues, which creates exceptional budget stability over economic cycles,” noted Chris Edwards, Director of Tax Policy studies at the Cato Institute.

From an economic standpoint, it appears South Dakota is weathering the COVID-19 pandemic. South Dakota ended the last fiscal year with a $19 million surplus, but they are also projecting an estimated 2.25 percent decline in revenues. South Dakota is also close to regaining the jobs that were lost as a result of COVID-19. 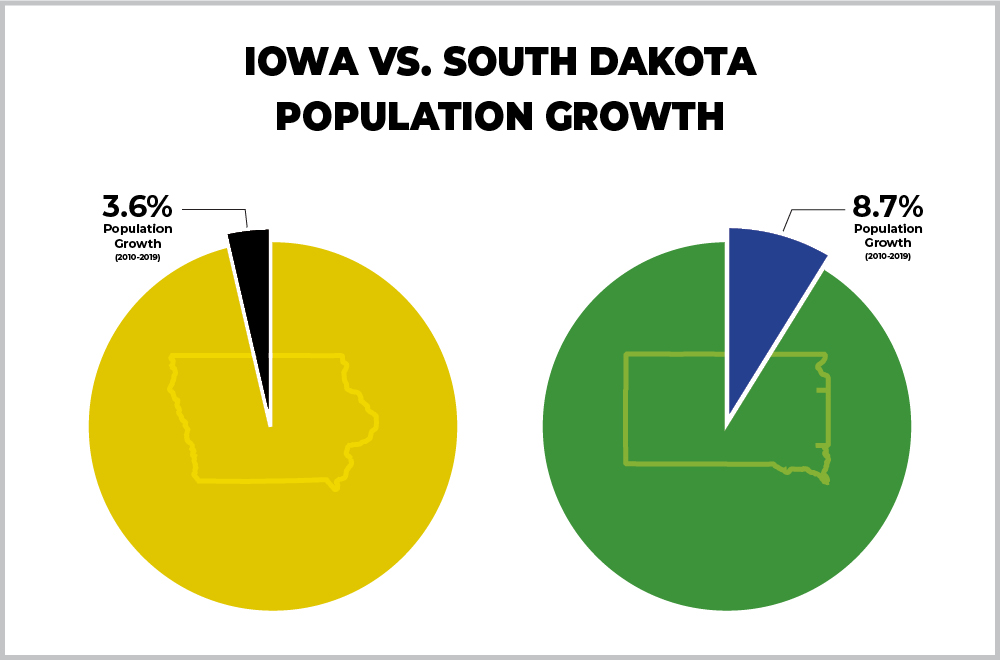 It would be possible for Iowa to join the ranks of no income tax states, but this transition will not be easy. Eliminating the income tax would be a pro-growth tax reform policy change. Nevertheless, the difficult part of any tax reform is it must simultaneously consider spending. Taxes and spending are linked and Jonathan Williams describes them as “opposite sides of the same fiscal coin.” In other words, “broad-based tax relief must be paired with responsible prioritization of spending,” noted Williams.

For Iowa to repeal the income tax, it would require substantial reform to the tax code. This would include either broadening the sales tax base, increasing the sales tax rate, or designing an income tax rate reduction system that would protect the budget. As an example, Arizona during the last legislative session considered a bill to phase out their income tax. The proposed legislation would ratchet down income tax rates after specific revenue triggers are met.

Even if eliminating the income tax is a sound policy, Iowa can look to other states who have enacted pro-growth tax reforms without eliminating their state income tax. Utah, North Carolina, and Indiana are examples of states that have both broadened their tax base and lowered income tax rates. All three have enacted pro-growth tax reforms which are benefiting both the taxpayers and the economy.

Utah, North Carolina, and Indiana are also states which are economically competitive  because of their tax friendly business climates. Utah, as an example, has almost tripled its gross domestic product since 1999. All three states have demonstrated that pro-growth tax reform can occur without eliminating the income tax.

Tax reform is not an easy process. It takes time and careful planning, but it is worth the effort. Whether eliminating the income tax or lowering tax rates across-the-board, pro-growth tax reform will make Iowa a more competitive place while allowing taxpayers to keep more of their hard-earned income.