Many special elections include financial questions that directly affect property taxes for everybody in the area. Yet, voter turnout for these questions is typically a fraction of that achieved during general elections.

In 2019, the Boone YMCA closed its doors. With liabilities’ exceeding revenue, the organization was no longer a profitable business venture. “It’s an older building in need of a lot of costly repairs… and because the Boone Y has never made much money, we don’t have any kind of reserve or anything to tackle those building projects,” explained Ruth Comer, the YMCA of Greater Des Moines Vice President of Marketing and Communication.

But when the market finds a venture unsuccessful, politics can inspire government to take on the costly and unprofitable project. That’s what the Boone City Council was doing when it put a $10 million bond question to fund a recreation and wellness center before residents in March 2022.

The proposal failed with 1,906 total ballots cast, representing just 20.8% of registered voters. Boone Mayor John Slight said in response to the result, “We always from day one wanted to make sure the voters had a say in this and I respect the outcome of the vote.” The property tax increase and 3% increase to electric bills was not what voters wanted during times of high inflation and uncertainty in the national economy.

But when an electoral vote is unsuccessful, politicians can always try again. Boone city leaders waited less than three months to bring the issue back up. The $10 million question was going to be asked again in a March 7, 2023, special election. Unfortunately, when fewer than 1,000 voters can decide that a city will spend $10 million or more, the incentive is high for special interests to try again.

Americans are broadly aware that elections take place in November each even-numbered year, but voters don’t have the same awareness about the many special elections that may occur at other points on the calendar. In Iowa, they must keep an eye on March, September, and odd-year Novembers, as well.

Many special elections include financial questions that directly affect property taxes for everybody in the area. Yet, voter turnout for these questions is typically a fraction of that achieved during general elections. Returning to Boone, a $23 million school bond passed with a mere 14.4% voter turnout. If the turnout for the wellness center vote, as low as it was, had been at that even-more-meager level, the “no” side might not have managed its tiny 150-vote win. Contrast these results with the most recent November general election, for which the turnout was 56.3% in Boone, with 11,271 ballots cast. The 2020 general election had a turnout of 76.7%, with 15,423 voters.

A small sampling of special elections across Iowa found the average voter turnout to be only 18%, whereas the average November turnout since 2010 has been 65%. 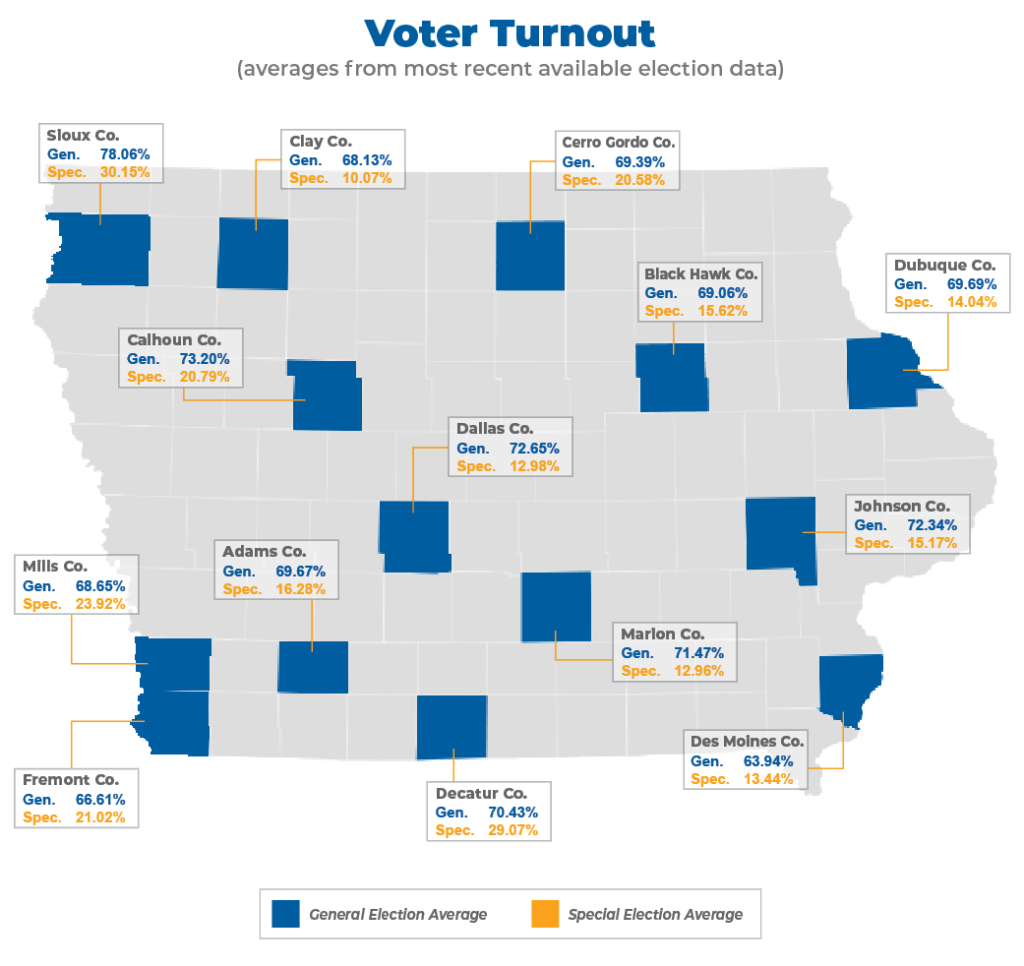 Given this wide variation, local governments should be required to hold votes for all bonded indebtedness, voted levies, and other revenue or spending questions that directly affect property taxes on November election ballots to ensure the greatest possible participation of the electorate. Iowa code already recognizes the gravity of bond-issue decisions, requiring a 60% threshold for passage rather than a simple majority. That difference is much less significant than the gap between special elections and general elections.

A recent news article states the city may be dropping its plans for the wellness center. Whatever the outcome of this project, future projects funded with taxpayer money need to be what most of the people in that community want and not a small percentage of the electorate. Increasing civic engagement results in the best options for the people of any community, and for Iowa local governments that means holding bond elections in November.