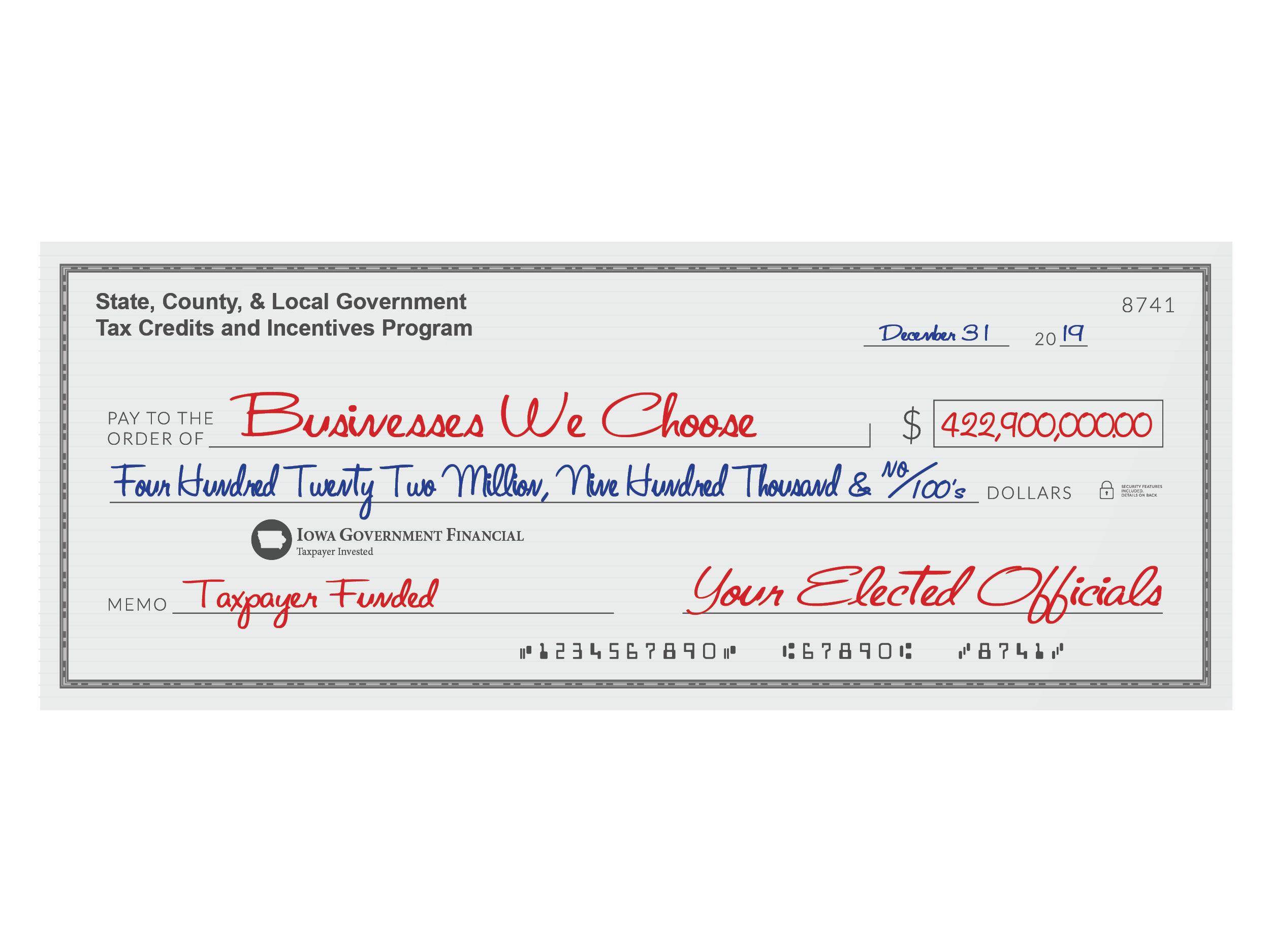 Tax credits and incentives are often an enticing siren song that lures state and local policymakers. Both are seen as not only necessary for economic growth, but also to help solve a variety of policy problems. Whether at a state or local level, tax credits and incentives often fail to deliver on the intended economic growth. They often create a form of cronyism and are often not the best use of spending taxpayers’ dollars.

A business receiving special treatment in the form of a credit or incentive allows governments to pick winners and losers, but lowering tax rates would benefit all businesses. “Other businesses do not receive these kind of tax preferences, and thus the exemptions create an uneven playing field for businesses in the state,” noted James Hohman, Director of Fiscal Policy at the Mackinac Center for Public Policy.

Iowa’s economy is strong. Nevertheless, some economic challenges remain, such as slow population growth, and perhaps most notable is the need for a greater labor force.  It is often assumed that tax credits and economic incentives are needed for Iowa’s economic development to help encourage both workforce development and population growth. The reality is that high tax rates are causing the state to suffer. High tax rates are often camouflaged by tax credits and incentives. It is time for a more thorough review of these handouts. Taxpayers deserve to know, regardless of the program, whether their dollars are being spent wisely. If economic growth is a goal of policymakers, then the best approach is to make Iowa more competitive by lower tax rates and creating a freer economy.

As a part of the 2018 comprehensive tax reform law, the legislature mandated the creation of an interim special Tax Credit Review committee to begin the process of reviewing Iowa’s numerous tax credits. This committee is in addition to the Tax Expenditure Committee, which is already charged with reviewing tax credits. At this time the Tax Credit Review committee has only met once, and it is unclear what reform if any will occur.

Iowa uses tax credits not only for economic development, but also for a variety of other purposes that include promotion of renewable energy and redressing socioeconomic inequalities. The use of tax credits and incentives by states is often compared to a nuclear arms race, because all states utilize them and very few are willing to “disarm.” The same is true for localities within a state. Local governments in Iowa utilize incentives for economic growth, especially the use of Tax Increment Financing or TIF.

States and localities are in economic competition. James Hohman argues that it is better for policymakers to realize that “luring businesses from other states with taxpayer dollars leads to a bad kind of competition.” Tax rates matter not only for a state’s business climate, but to overall economic health. States should compete over their business, economic, and overall quality of life. “It’s better to compete over business climate and quality of life rather than courting companies with money from the state treasury,” argues Hohman.

Regardless, all of Iowa’s complex and extensive system of tax credits impose costs on other taxpayers — and that cost is growing. From 2007 to 2019, tax credits have increased from $197.6 million to $422.9 million. This is a $225.3 million or 114 percent increase in just 12 years. Increasingly, academics and other researchers across the country are proving how bad these types of tax credits are at creating jobs or growing economies, with a growing array of high-quality studies seriously questioning their effectiveness.

Recently North Carolina’s Job Development Investment Grant (JDIG) and One North Carolina Fund (OneNC) were evaluated to see if these programs delivered the intended jobs as promised. The results were disappointing because “just over half of the promised jobs were actually created and about 37 percent of the projects failed to create even one single job.” The Michigan legislature repealed a corporate subsidy program “Good Jobs for Michigan,” which has “approved $16 billion in subsidies and tax credits since 2001 with little to show for it.”

During the first meeting of the Tax Credit Review Committee, State Representative Dave Jacoby (D-Coralville) asked an important question of whether or not data exists that could demonstrate whether or not the benefits of tax credits outweighed the loss in revenue. A staff member from Iowa’s Legislative Services Agency replied that the data does not exist. This is a similar conclusion that often emerges from the Tax Expenditure Committee. Often legislators are not provided with sufficient information on whether a tax credit is working or not.