Washington D.C. gave local governments across the country trillions of dollars through the American Rescue Plan Act (ARPA).  To understand how that money was spent, ITR Foundation focused on a selection of cities and counties across Iowa, asking each:

How much money did you get?

How much have you already spent?

How much is left?

What did you spend ARPA funds on?

ITRF’s Sarah Curry and Chris Ingstad joined a recent episode of ITR Live (on Anchor and Apple) to talk about Sarah’s findings in an in-depth report published by the Foundation in July.  When Congress passed this behemoth of a bill, they seemingly tried to make the American people believe local governments would cease to exist without assistance from the federal government.  Unfortunately, Congress apparently forgot that cities and counties continued to collect property taxes throughout the pandemic, which has allowed roughly 85% of the ARPA funds allocated to the surveyed communities to remain unspent as of this summer.

Despite receiving millions in federal funds, seven of the local governments (see table below) chose to increase their property tax rates this year.   Council Bluffs, for instance, raised their levy rate by nearly $0.30 even though ARPA provided them almost $25 million!  This influx of printed deficit money from the federal government is one of the principal drivers of inflation in our economy right now. 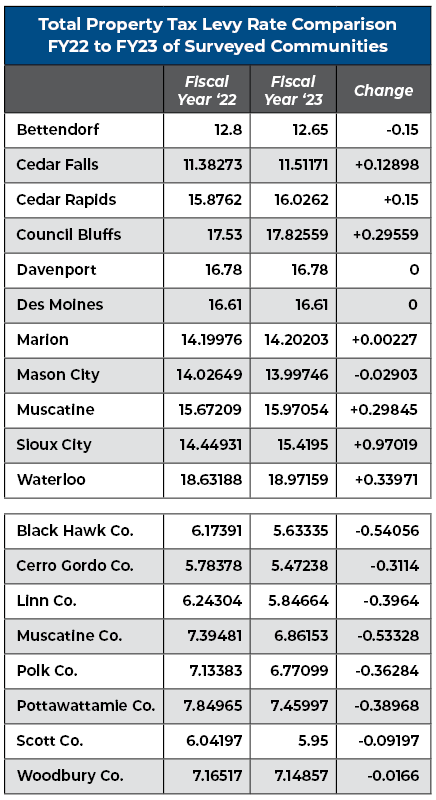