What could be done: Speed up planned rate reductions, continue working toward a top individual income tax rate of 4 percent, and cut the top corporate income tax rate to 5 percent.

While Iowa’s economy is doing well, when judged by the low unemployment rate, improvements can still be made to make our state more attractive to families and workers. The fact that Iowa has some of the highest tax rates in our region certainly contributes to our slow population growth. While the nation’s population has grown by more than 40 percent since 1980, Iowa’s population has only grown 7 percent over that same period of time.

A study published by the Federal Reserve, Entrepreneurship and State Taxation, states “increases in corporate tax rates have a statistically and economically negative effect on employment among startup firms.” Iowa has seen this play out along its own border with South Dakota, a state that does not have an income tax. Over a ten year period, 95 new health care establishments opened in South Dakota, while only 8 were opened in Iowa. Those South Dakota counties realized 75 percent job growth compared to just 5 percent on the Iowa side.

Tax rates impact population. States that have lower tax rates tended to see more in-migration. A Cato Institute study measured the impact of tax reform and population. In the Midwest, South Dakota “has enjoyed net in-migration in four of the past nine years,” while surrounding states, including Iowa, experienced net out-migration. In fact in 2015-2016 Iowa lost over 9,000 people to Florida, Texas, and South Dakota — all states that do not have an income tax.

If Iowa wants to keep and attract more people, foster a friendlier business climate, and provide more economic opportunity, freedom, and job creation, the legislature must continue to work towards lower tax rates.

During the 2018 legislative session, the Iowa legislature passed tax reform that provided relief for many taxpayers and increased Iowa’s economic competitiveness.

Iowa’s individual income tax rate did see some minor rate changes in 2019 as a result of the reform, but more significant rate changes will not occur until 2023. For income tax rates to be lowered again, Iowa’s general fund revenue must average 4 percent growth for four years in a row, meaning our state’s revenues for Fiscal Year 2022 must reach a minimum of $8.3 billion. This growth may be difficult to achieve.

If the revenue target is met, the top rate would fall to 6.5 percent, which is far better than our current top rate of 8.53 percent. If the revenue target is not met for 2023, then rate reduction will not occur until that target is reached. This delay will not only be harmful to taxpaying families and businesses but to overall economic growth as well. It also opens the possibility of a future legislature undermining tax reform by eliminating the revenue trigger and perhaps the planned, future tax cut. 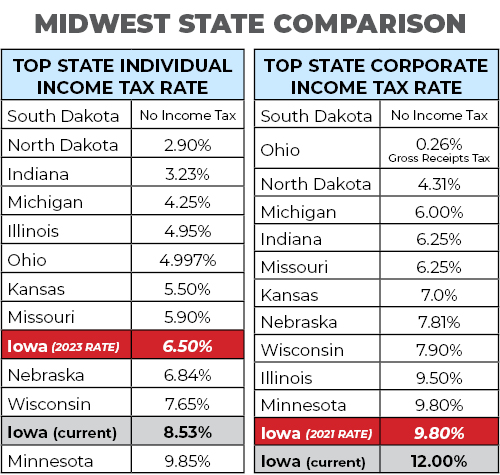 Therefore, the Iowa legislature should consider revising and lowering the future tax rate. A tax rate of 6.5 percent is an improvement on the current 8.53 percent, but it is still high in comparison to other Midwestern states. It would be far better for Iowa to work towards a top income tax rate of 4 percent.

How Could It Be Accomplished?

Iowa policymakers can learn from states such as North Carolina and Indiana. The Tar-Heel state is the “gold standard” for state tax policy, demonstrating tax rate reductions can be combined with slowing the growth of state spending while still providing for the priorities of government. The gradual tax rate reductions which occurred in both states are examples for Iowa to follow. Our state has the opportunity to develop tax policies that will lower both the individual and corporate income tax rates. While achieving these tax rate goals will not be easy, it is important to continue the positive trends in Iowa’s economy that began when federal tax reductions were delivered by the Tax Cuts and Jobs Act and President Donald Trump’s efforts to unshackle the economy from excessive regulations. 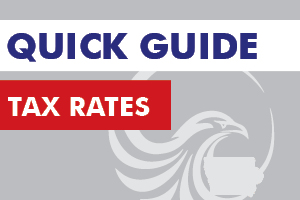 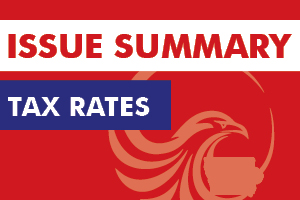 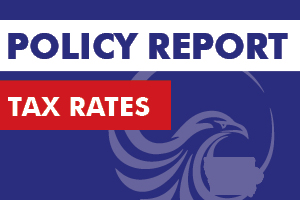 What Other States Have Done

What was Really the Matter with the Kansas Tax Plan

Help from Our Friends: What States Can Learn from Tax Reform Experiences across the Country

How Does Tax Reform Change a State’s Fiscal Health?

Lessons from Kansas: A Behind the Scenes Look at America’s Most Discussed Tax Reform Effort