Taxpayer dollars should be used to advance the public good, not to bankroll lobbyists who advocate against taxpayers’ interests.

Taxpayer-funded lobbying is when political subdivisions such as counties, cities and school districts, pay lobbyists with money they have received from taxes. This can include membership fees in government sector lobbying associations like the Iowa League of Cities, Iowa Association of Counties, and the Iowa Association of School Boards.  It can also include local governments hiring and contracting with lobbyists directly.  For instance, in 2022 Linn, Marion, and Polk counties spent a combined $190,000 on lobbying.

Taxpayers may not realize that local governments, that is, cities, counties, and school boards, have lobbyists who are paid with property tax dollars. Whether these lobbyists are acting in the interests of the taxpayer or the government entity they represent is an important question.

Many local governments opposed the 2019 property tax accountability and transparency bill, and they tried to influence legislators to vote against it. While legislators faced pressure from local officials to oppose the reform, many of their constituents demanded its passage. During this debate, taxpayers were forced to fund lobbyists working on behalf of the local government officials who opposed their interests.

Considerations of fairness and morality suggest that taxpayer dollars should not be used to pay for lobbying. For instance, the League of Cities, the School Board Association, and the Iowa State Association of Counties, among other organizations, would almost certainly oppose any truth-in-taxation or spending limitation bill.

Local communities already have a voice in state government — their elected representatives – and local government officials can communicate directly with them without using taxpayer dollars to finance lobbyists. By eliminating both a budget line and a class of advocates paid to increase government revenue, prohibiting the use of taxpayer-funded lobbying would provide property tax relief in multiple ways. 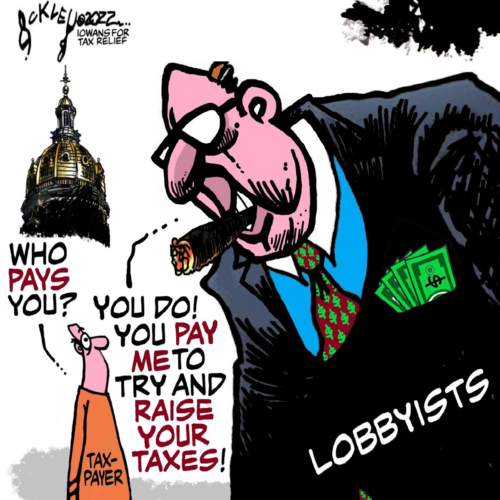