The Road to Tax Reform Starts with Conservative Spending

The Conservative Iowa Budget helps limit government spending so that there are more opportunities for tax relief and for widespread prosperity for Iowans now and for generations to come.

The path to keeping government from excessively burdening people with taxes and allowing for pro-growth tax reform starts with conservative budgeting. Iowa Gov. Kim Reynolds and the Republican-led legislature have fortunately been following a policy of prudent budgeting. Iowa will end fiscal year (FY) 2021 with a $1.24 billion budget surplus in its general fund, which is substantially larger than last year’s surplus of $305 million. The large surplus is a direct result of fiscal conservatism. Nevertheless, policymakers will need to continue this approach to correct for past excesses and strengthen the state’s improving fiscal foundation to provide needed tax relief. This can be achieved by keeping government spending from excessively burdening taxpayers.

The Iowans for Tax Relief (ITR) Foundation’s Conservative Iowa Budget (CIB) for FY 2023 (see Figure 1) helps do this by setting a maximum threshold on the state’s general fund based on the rate of the state’s resident population growth plus inflation, as measured by the U.S. consumer price index (CPI). This fiscal rule of a spending limit on the general fund based on population growth plus inflation provides a reasonable limitation that essentially freezes inflation-adjusted spending per capita. This helps to lessen the crowding out of private sector activity and helps to stabilize expectations over time. 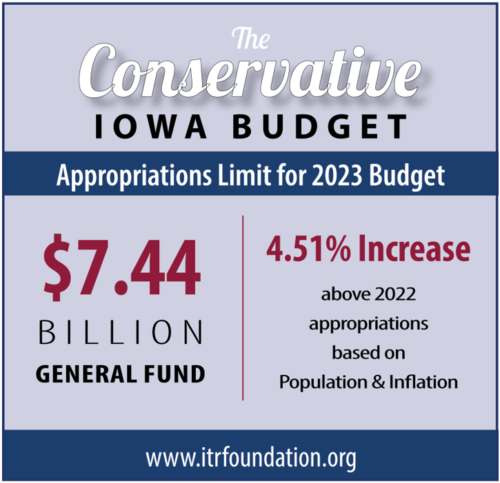 The previously passed FY 2022 budget was $8.1 billion in general funds, which was a $345 million more than the prior budget. However, ITR’s 2022 CIB was $7.88 billion based on a limit rate of 1.38% in 2020, which was actual data for the year prior to the legislative session. Although appropriations surpassed this amount, the legislature’s $1 billion in tax relief did not grow government, so it is appropriately excluded from appropriations resulting in the budget being $763 million below the CIB.

Iowa’s Revenue Estimating Conference (REC), which has the difficult task of forecasting tax revenue, estimated that revenues will increase for both FYs 2022 and 2023. The REC is estimating $8.9 billion in revenue for FY 2022 and $9.1 billion for FY 2023. This projection is a healthy improvement from the previous year.

These optimistic projections by the REC make it prudent to continue using budgetary caution to fund only limited roles for government instead of spending every taxpayer dollar. Increased economic activity in the private sector that pays for these tax revenues means that more money should be there where the marginal return is higher.

Economic forecasting is difficult, and several headwinds could influence both Iowa and the national economy thereby pressuring the state’s budget picture. The most pressing concern is the rise of inflation and the potential negative consequences if the trillions in new spending and tax increases are enacted into law as part of President Joe Biden’s “Build Back Better” agenda.

Iowa was prepared fiscally for much of the costs related to the government shutdown in response to the COVID-19 pandemic because of prudent budgeting. Truth in Accounting’s Financial State of the States 2021 report ranks Iowa in the top 10 (9 out of 50) of fiscally stable states. Heading into the 2022 legislative session, lawmakers will not only have a $1.24 billion surplus, but the reserves are plentiful, including $1.054 billion in the Taxpayer Relief fund.

Therefore, it is important to keep spending within the bounds of the CIB. This will require legislators to prioritize every taxpayer dollar, which is difficult as many special interests will be arguing for either new funding or expansion of their previous allocations.

Already public education (k-12, community and technical colleges, and higher education) along with Medicaid comprise 79% of the general fund budget. This creates additional pressure because spending on these items continue to increase and crowd out other priorities.

While Iowa has budgeted well recently, that has not always been the case.

But the earlier period of excessive government spending led to a cumulative annual difference of $1.9 billion above population growth plus inflation (see Figure 3). This means that the state’s budget has been growing at a faster rate than the average taxpayer’s ability to pay for it. In fact, this excessive spending costs a family of four, on average, almost $2,400 more in taxes per year. That’s less money available for families to satisfy their own needs and desires. 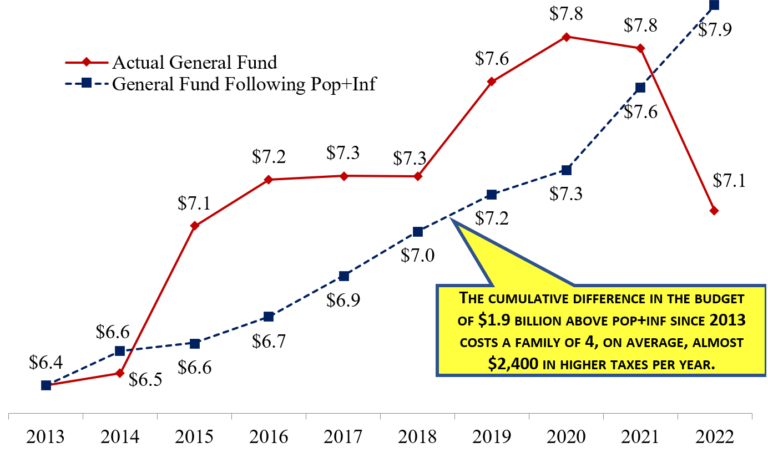 Gov. Reynolds and Republican legislative leaders are making tax reform a priority for the 2022 legislative session. To achieve their goal of a significant pro-growth tax reform spending must be restrained. Fiscal rules that limit spending as outlined in the CIB help achieve this. While Iowa currently has a 99% spending limit in its tax code, this is a weak limit that is not reflective of the average taxpayer’s ability to pay for spending and leaves little revenue available for tax relief.

The spending limit should be strengthened by passing a constitutional amendment or changing it in the code to be based on a maximum rate of population growth plus inflation. This is an important measure because it accounts for more people paying taxes, higher wages—which are highly correlated with inflation over time—and economies of scale.

Gov. Reynolds and the Republican-led legislature deserve credit for their recent prudent spending and tax relief. In addition, the legislature has been careful to avoid using the billions in COVID-19 related federal funding on ongoing expenses. The $1.24 billion surplus is not a result of these federal dollars, but rather the fiscal conservativism of prudent budgeting and tax reform that has spurred economic growth.

Calculation of the Conservative Iowa Budget

That is why the TEF’s Conservative Iowa Budget for FY23 sets a maximum threshold on the general fund budget of $7.44 billion. Table 1 shows that this maximum amount is calculated using actual data in 2021 before the legislative session based on the limit rate of 4.51%.

Note. Data are from the Federal Reserve Economic Data to estimate the 2021 annual growth rate in Iowa’s based on recent trends in resident population and U.S. CPI inflation.

Therefore, using the FY22 base budget of $7.12 billion after appropriately excluding the $1 billion in tax relief results in the 2023 CIB of $7.44 billion (see Figure 4). 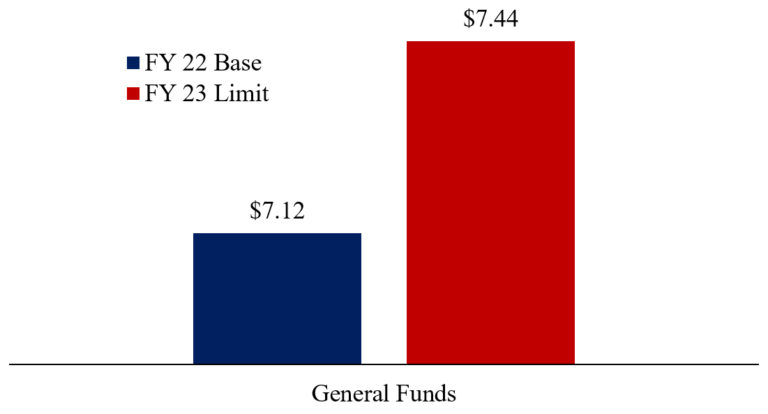 Note. The FY22 base is from Iowa state budget publications and authors’ calculations using the 4.51% increase in population growth plus inflation in 2021 to determine the $7.44 billion maximum threshold for general fund appropriations.

The Iowa Legislature should pass a budget below the Conservative Iowa Budget in 2022 and beyond to effectively freeze real spending per capita so that the burden of government will be less. This will help provide opportunities for budget surpluses to return to taxpayers through substantial, broad-based tax relief that will support more paths for widespread prosperity for Iowans now and for generations to come.

John Hendrickson is policy director at the Iowans for Tax Relief.

Vance Ginn, Ph.D., is chief economist at the Texas Public Policy Foundation. He is the former associate director of economic policy for the Office of Management and Budget at the Executive Office of the President, former university lecturer, and an expert on economic and fiscal issues with research that seeks opportunities to let people prosper in Texas, D.C., and beyond. His work has been featured in the Washington Post, Fox News, Forbes, the Federalist, Real Clear Policy, The Hill, Washington Examiner, and more. Ginn earned his doctorate in economics at Texas Tech University.