The Fight To Preserve Iowa’s Voice

It appears the Republican Party will maintain Iowa’s first in the nation status for its 2024 presidential caucus, but uncertainty remains whether Democrats will continue to have Iowa leadoff their party’s nominating process. Iowa’s first in the nation presidential caucuses have become a tradition and are an integral part of the state’s political culture. As a reminder, Donald Trump won Iowa’s Republican caucus in 2020 and Pete Buttigieg was the choice of Iowa Democrats that year.

Even now, more than two years out from the next Presidential election, prospective candidates are visiting Iowa to test the waters and increase their visibility. The caucuses are important and both political parties in our state should continue to fight to hold onto their pole position.  More importantly, though, Iowa’s legislature needs to make a stand to defend the Electoral College.

The Electoral College is perhaps the most misunderstood component of our Constitution. Increasingly, the Electoral College is under attack with calls for its elimination, usually from progressives and liberals, because it is claimed to be anti-democratic. The National Popular Vote (NPV) movement is an effort to get state legislatures to pass legislation to join an interstate compact that would commit their electors to support the winner of the national popular vote. The map below illustrates the 15 states (and the District of Columbia) that have passed legislation to join the NPV compact. This means that 195 electoral votes have been pledged and NPV will only need 75 more electoral votes to reach 270, which is what is required to win the presidential election. 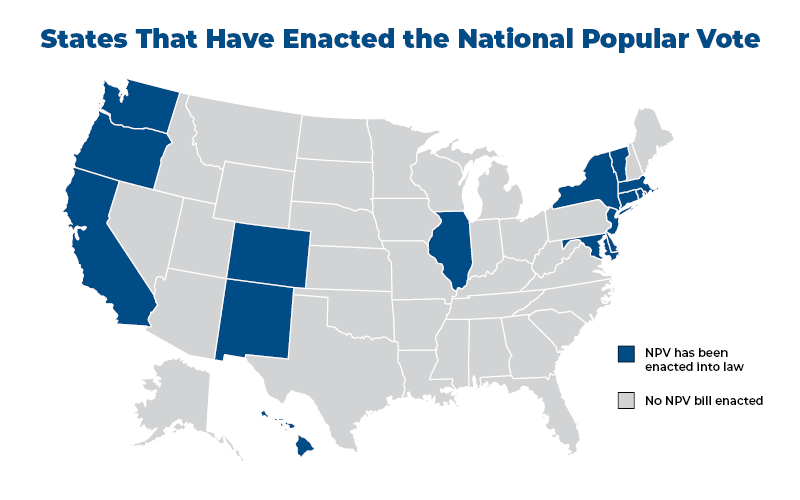 The effort to undermine and eventually eliminate the Electoral College by replacing it with a national popular vote is being disingenuously promoted as a better, more democratic process to elect the President. However, proponents of NPV and those critical of the Electoral College fail to understand why the Founding Fathers selected this unique system for selecting the President in the first place.

When the Founding Fathers met in Philadelphia in 1787, our Constitution created a republican form of governance that limited the powers of the federal government.  In Federalist Paper 45 James Madison wrote: “The powers delegated by the proposed Constitution to the federal government are few and defined. Those which are to remain in the State governments are numerous and indefinite.” The 10th Amendment further solidified what Madison wrote in Federalist 45. Historian Allen Guelzo correctly points out that the “Constitution never set out to create a streamlined national government.”

The American Founders did not wish the states to have a diminished role under the Constitution. The late constitutional scholar James McClellan wrote that the “entire Constitution is actually honeycombed with provisions designed to protect the residual sovereignty and interests of the states and to give them influence in the decision-making process at the national level.”

Americans need to understand the importance of federalism to our constitutional republic. Federalism is as essential as separation of powers and checks and balances, allowing the states to maintain a level of sovereignty from the federal government. The Electoral College is the final “Rock of Gibraltar defense of federalism. “Federalism is in the bones of our nation and abolishing the Electoral College would point toward doing away with the entire federal system,” argues Guelzo.

Iowa should fight to defend our first in the nation status, but more importantly, policymakers should take a stand in defending constitutional government by working to preserve the Electoral College. If the Electoral College falls, then much more will be at stake than the status of the Iowa caucuses.