The Growing Cost of Municipal Debt

The Growing Cost of Municipal Debt

With inflation and rising interest rates, it’s normal to worry about the national debt and what that means for our country. But what about Iowa and our local communities?

During the last few years, the state of Iowa tightened its belt and has reduced its overall debt burden. However, the combined total of state and local government debt increased by 5.3% to $18.8 billion in FY2021, the highest percentage increase in a decade.

Cities borrow money for several different reasons, usually it is a large capital project or equipment purchase. Each city council establishes their own debt policy which sets the parameters for how much debt and what kind of debt can be used for various projects. However, state law sets some basic parameters.

Iowa has a Constitutional Debt Limit for all cities, which is 5% of the taxable value of all property within a city’s jurisdiction, unless the debt is payable from a city utility (water/sewer) or from enterprise revenues (landfill/garbage), then there is no legal limit.

For FY2022, there are 424 cities across Iowa that have no outstanding debt. For those that have debt, the average debt service amount is around $1.3 million. Most recently, the state’s largest city, Des Moines, has held the highest amount of outstanding debt among all Iowa cities. As a result of this, Des Moines also has the highest budgeted amount for debt service, $73.4 million.

When broken down by purpose, the cities leveraging the most amounts spend it on things we expect. West Des Moines has $172 million in outstanding debt for transportation expenses, Cedar Rapids has $165 million for utilities/sewers, Coralville has $154 million for housing and urban development, Urbandale has $35 million for public buildings, while Waukee has $9 million outstanding for parks/recreation.

The table below provides a quick snapshot for Iowa cities with some of the largest amounts of outstanding debt. 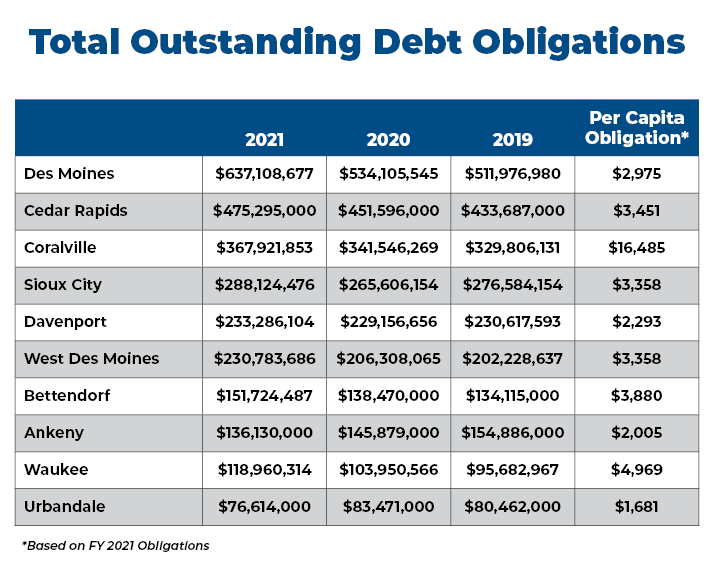 Some of the higher-than-normal amounts in 2021 can be attributed to the pandemic and the federal stimulus money sent to local governments. Cities were flooded with cash during the pandemic, and while several of them anticipated a drop in revenue, that was not realized for many. Being flush with cash and having record low interest rates is a combination that encouraged cities to pursue infrastructure projects or to refinance previously held debt, which isn’t necessarily a bad thing.

We all know that debt burdens taxpayers and can crowd—out other priorities from the budget. But in a time when many of our cities are experiencing aging infrastructure, it’s not unreasonable to see cities refinancing debt or issuing new bonds to pay for utilities its citizens will use every day. However, cities now have the task of being good stewards and paying off their debt in a timely manner without taking on additional burdens. A temporary increase for a good reason is understandable, but constant, high levels of debt put the taxpayer on the hook for more interest payments in the future.

We’ll be adding debt information to ITRLocal.org in the coming weeks.  But if you’re interested in digging into the debt obligations of your various local governments right now, you can read this report by Iowa's State Treasurer.