Governor Kim Reynolds and the Republican-led legislature continued to follow fiscal conservatism. The legislature passed an $8.1 billion FY 2022 state budget. This budget is $290.7 million more than the FY 2021 budget. The $8.1 billion budget is over $4 million more than what Governor Reynolds originally proposed. Nevertheless, even as spending has slightly increased from the previous fiscal year, Iowa’s fiscal house is in good standing. 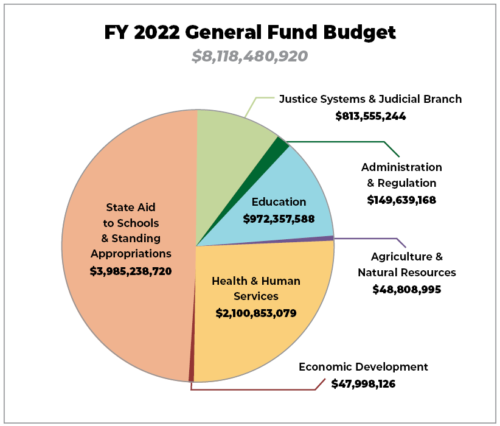 The budget spends 97.66 percent of projected revenues for FY 2022. A $385.8 million surplus is projected and could increase based on revenue projections. The Cash Reserve fund and the Economic Emergency fund are full, with a combined total of $817.9 million. The Taxpayer Relief fund also has a balance of $316.4 million.

Once again, public education (prek-12, community colleges, and higher education) and the Department of Health and Human Services (DHS), which includes Medicaid, a leading budget driver, consume the largest portion of the budget. Public education and DHS consume 79.9 percent of the budget. In FY 1995, both consumed 47.2 percent of total spending. Since then, education and DHS spending has increased by close to 33 percent. 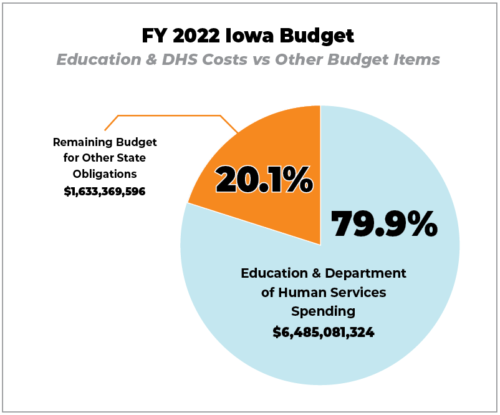 State aid to schools continues to be the largest appropriation at $3.4 billion. That in addition to funding other public education, consumes 54 percent of the budget. The DHS budget for FY 2022 is over $2 billion.  The growing cost of both public education and DHS (Medicaid) should concern policymakers. These two programs are on autopilot and they are crowding out other priorities. Structural reforms to both programs will be needed.

Governor Reynolds and the Republican-led legislature are criticized by many progressives and liberals who argue that many areas of the state budget are underfunded, especially in public education and DHS. However, this does not mean that spending has declined. From 2013 to 2020, Iowa’s budget has grown 1.6 times faster than population growth plus inflation. Last year’s budget (FY 2021), which passed during the pandemic, was considered a “status quo” budget, with spending only slightly greater than the previous year.  This is hardly austerity-style budgeting and only in government can slowing the growth of spending be considered a cut.

The spending discipline applied by Governor Reynolds and the Republican legislature has also allowed them to reduce tax rates. In 2018, a comprehensive tax reform measure was passed, which lowered both individual and corporate income tax rates. During this legislative session, another tax reform measure was passed, which will lower individual income tax rates in 2023, and phases out over five years the obsolete inheritance tax. In addition, the measure provided property tax relief by phasing out the county mental health tax levy. Funding for mental health will now be the responsibility of the state general fund.

As a result of prudent spending, the Iowa legislature will be able to consider further tax reform during the next legislative session. Tax reform in Iowa is far from complete and both individual and corporate tax rates need to be lowered. Taxes and spending are two sides of the same coin, and to lower rates, spending must also be reduced. If policymakers want to seriously reduce tax rates and make the tax code more competitive, spending must be prioritized and limited.

Iowa is demonstrating that fiscal conservatism works. Governor Reynolds offers a clear contrast to President Joe Biden, who in his first 100 days in office has proposed $6 trillion in new spending. Both political parties can share blame in our $28 trillion and growing national debt, but Governor Reynolds and the Republican-led legislature can serve as an example to federal policymakers.

The tax and spend policies that dominate both the federal government and states such as New York, California, and Illinois, just to name a few, are examples of disastrous economic policies. High tax rates, supported by spending increases, fail to accomplish the intended goal of economic growth.

Governor Reynolds understands that the best way to grow Iowa’s economy and create opportunities is to create more freedom through less taxation, regulation, and spending. Iowa’s budget is providing for the priorities of government. This does not mean that there are not areas for budget reform, such as considering a stricter spending limitation.

The fiscal policy principles of limited spending, conservative revenue estimates, and keeping tax rates low lead to responsible budgeting. These principles will not only generate economic growth, but they prepare the state for economic downturns and emergencies. Following these principles also place the taxpayer first.