The Politicization of Education

An Iowa Grandfather recently shared a conversation he had with his granddaughter about what she was learning in American History. His granddaughter, who is a fourth-grade public school student, was learning about the American Revolution. After inquiring what she learned, she replied, “Grandpa, did you know that the revolutionary war was fought for the freedom of rich white males?”

This story is just one illustration of an accelerating national problem of the politicization of civic education and the general decline in basic knowledge of American history and government. Last summer, many Americans were horrified as rioters defaced and tore down statues across the nation, and many public buildings were renamed out of political correctness. It was not just Confederate statues that were defaced, torn down, or removed, but also those of President Abraham Lincoln, Christopher Columbus, among others. America’s Founding Fathers, such as George Washington and Thomas Jefferson, were also under attack because they did not conform to the “woke” standards. Instead of learning from history, it became popular to destroy it.

The crisis in civic education has been building for decades, but only recently is it getting the attention it deserves. Numerous studies have chronicled the alarming rise in civic ignorance. In our technology-driven society, most attention is given to STEM (science, technology, engineering, and math) programs and preparing students to pass standardized exams, while other parts of the curriculum, such as History and Government, suffer.

Although STEM and technical education are valuable, education is more than just preparing an individual with the necessary skills to succeed in an occupation. Education must also be about character, citizenship, and liberty. “History isn’t just something that ought to be taught, read, or encouraged only because it will make us better citizens. It will make us a better citizen, and it will make us more thoughtful and understanding human beings,” stated historian David McCullough.

Students at all grade levels, including higher education, do not have a basic understanding of American history, government, Western Civilization, and economics. To make matters worse civic education has become politicized. Many schools are using radical curriculums that reflect a socialist interpretation of our nation’s history. Increasingly, students are displaying significant support for dangerous ideologies such as socialism.

This politicization of civic education also includes critical race theory, political correctness, multiculturalism, among others. Students are taught that they are global citizens rather than citizens of the United States. Faculties at all levels of education tend to be dominated by liberals, this being especially true in higher education. 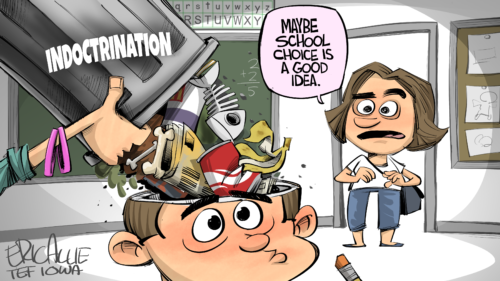 Politicization is even occurring in Iowa. A recent example was the Ames school district’s use of Black Lives Matter curriculum, which led to oversight hearings before the legislature. The Iowa legislature is also debating the controversial use of the 1619 Project. It argues that the American Founding is based upon the institution of slavery. The 1619 Project has generated much debate and criticism from leading historians such as Gordon Wood, James McPherson, and Allen Guelzo.

For many progressives, civic education is not only about learning a distorted view of American history, which benefits their woke ideology, but it is also becoming an agent of political change through activism. “Action Civics” or “hands on democracy” is replacing traditional learning of American History with political activism. Congress is even considering nationalizing “Action Civics” with the Civics Secure Democracy Act. This proposed legislation would create a Common Core-style curriculum that would apply to states and localities.

“In effect, we are looking at an effort to impose a new federal Common Core in the politically explosive subject areas of history and civics,” wrote Stanley Kurtz, a senior fellow at the Ethics and Public Policy Center. Further, Kurtz argues that the Civics Secure Democracy Act “sharply breaks with fundamental assumptions in American education, first by promoting illiberal Critical Race Theory, and second by turning what should be a politically neutral classroom into a training ground for leftist advocacy and lobbying.” This is bad policy not just from an education standpoint, but the federal government should stay out of education policy and is just another attempt to control states through federal mandates and undermine federalism.

A greater emphasis is needed on the teaching of civic education. States and localities should work to ensure that education standards focus on learning about history. As an example, students should spend time reading primary documents and studying the Founding Documents.

“Students need to go back to America’s past and ask it questions, starting with our Founding. They need to study great documents like the Declaration of Independence, the Constitution, Abraham Lincoln’s “Gettysburg Address,” and Martin Luther King’s “I Have a Dream” speech. Not just read about them in boring textbooks, but read the documents themselves, for themselves. Have great conversations with those great minds – discover for themselves the story of America in the words of those who lived it,” stated Jeffery Sikkenga, Executive Director of the Ashbrook Center.

Schools need to provide greater transparency in their curriculum. Parents can request to see what curriculum they are using, but schools should publish these textbooks and other resources online, including supplemental information. As school curriculum is becoming more politicized, parents need to be informed about what their children are learning in school, even with math.

Increasing parental choice in education is another reform that will help improve civic education. Some parents may object to a particular curriculum, and they should have the ability to place their child in the school that best reflects their educational needs and values.

Americans have a citizenship responsibility that requires an informed patriotism based on our history and institutions. “History is the source of all life’s lessons, the good and the bad. We turn to History to see what to embrace and what to avoid,” wrote James S. Robbins in Erasing America: Losing Our Future By Destroying Our Past.

In 1838, a young Abraham Lincoln argued that Americans should have “a reverence for the Constitution.” Lincoln reasoned that the founding documents, the Declaration of Independence and the Constitution, needed to be respected and understood to have a moral and civil society. Lincoln referred to this as the “political religion” of our nation and argued, these values and principles should be proclaimed throughout the nation.

In his “Farewell Address to the Nation,” President Ronald Reagan warned “of an eradication of the American memory that could result, ultimately, in the erosion of the American spirit.” To confront the policy challenges of today, citizens must understand our history and government.

The decline of civic education is a moral crisis that we must resolve. In The Death of the West, Patrick J. Buchanan wrote: “How does one sever a people’s roots? Answer: Destroy its memory. Deny a people the knowledge of who they are and where they came from . . . Destroy the record of a people’s past, leave it in ignorance of who its ancestors were and what they did, and one can fill the empty vessels of their souls with a new history . . .”

It is time we place a higher emphasis on teaching American history and government in our educational system. Likewise, greater educational transparency is needed in our classrooms. Finally, if parents oppose what the school is teaching their child, they should have the ability to select a school, whether public or private, that best fits their child's educational needs and values.